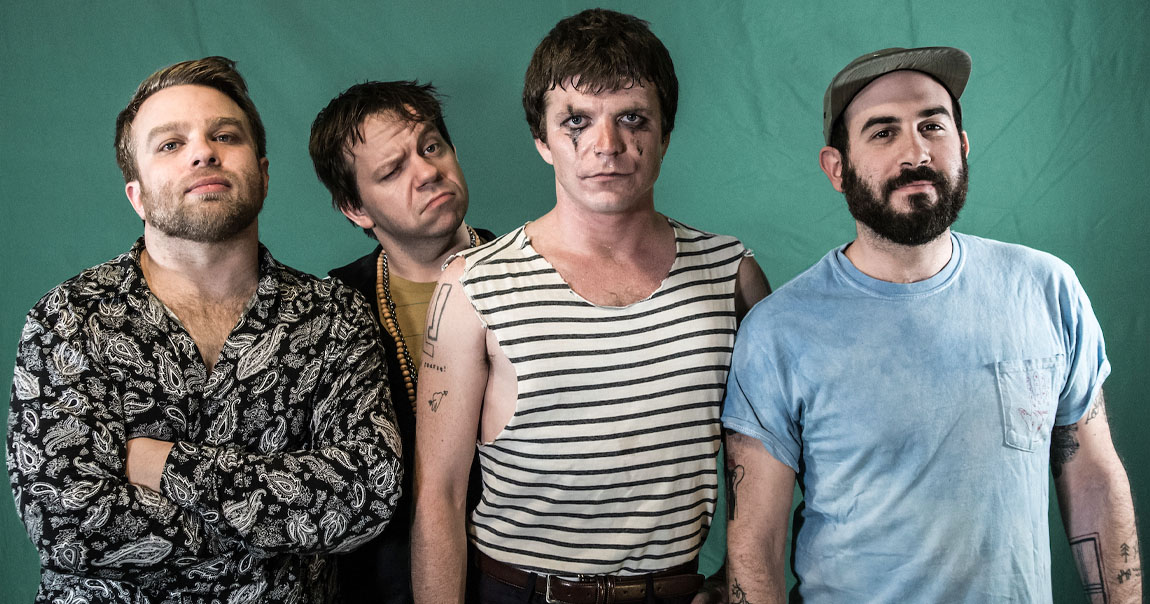 PEARS rose up out of the swamps of New Orleans in 2014 with their self-released debut album Go To Prison. The group caught the attention of Off With Their Heads’ Ryan Young after their first live performance on Mardi Gras and later signed to Fat Wreck Chords. Their second album, Green Star, cemented them as one of hardcore’s most exciting new acts and showed their ability to seamlessly transition between melodic and manic, in both thematic content of their songs and instrumentation.

Zach Quinn, lead vocalist of PEARS, attributes this juxtaposition to the band’s life in New Orleans. “Well, it’s a party town. I mean, at face value that doesn’t mean much, but when the party starts in your teens and doesn’t ever stop, there’s a whole lot of nasty shit that can happen. I mean, you know, you fuck up. So it’s just an intense place, with sky highs, and subterranean lows, it’s vibrant and beautiful, and terrifyingly ugly.”

Recorded in Denver’s Black Bluhm studio with Chris Fogal (The Gamits) their self-titled third album, out March 6th via Fat Wreck Chords, shows PEARS charging into new territory. And on some tracks, doing it blind. Unlike their previous releases, much of the album was unplanned at the time of recording. But the band wasn’t going to let little things like strict time constraints and lack of plans stifle their creativity.  “It made it a profoundly more interesting record to work on,” said Quinn.

“We had a very concrete amount of time to complete the album, and very NOT concrete material, so we did what has become my favorite thing to do as an artist: wrote ourselves into and out of corners under pressure. We did what I had previously done on the Bandaid Brigade record, which was kind of a ‘Yes and’ approach. It makes it more challenging and, I think, ultimately more unique.”

As a PEARS album, this self-titled effort is certainly that. PEARS still delivers on the sound that won fans over from the first note. The guitars lurch and lumber while Quinn’s vocals are spat out in a  vicious fury that pummels the listener. PEARS has literally found their rhythm. Sludgy, heavy guitars slog along before picking up the pace to some heart-pounding hardcore punk.

Quinn is happy with where the band has ended up in terms of their sound, and admits it took some growth to get to this point. “I feel like this record is really just us digging our heels into our own identity. What were discoveries about our sound on Green Star were mainstay traits this time around.” The choice to self-title this album is clearly deliberate. It’s the band’s way of saying, “You know us, and you know why we’re here.”

Quinn’s lyrics are the most striking feature of the album. The singer has touched on similar themes of isolation and personal conflict in previous tracks like Green Star and Arduous Angel. On this latest release, Quinn is getting down to details.  “I’m not sure if it’s more introspective, I think it’s mostly just less abstract. I feel like the previous records, especially Green Star, were more about conveying emotions with words rather than hard ideas.”

Quinn is right. Descriptions of his point of view on Green Star were vague enough for the listener to graft their own life experiences onto them—a big part of their initial appeal, as were the poetic lyrics contrasting with their intense hardcore riffs. The band’s self-titled album has kept that same musical energy while sharpening their lyrics and turning to real life problems and situations. There’s no guesswork on this record. Quinn talks explicitly about his teeth falling out because he’s afraid of the dentist and berates himself for not “adulting” properly. “Zero Wheels” opens with Quinn admitting his failures to file taxes or even cook an egg for himself.

Opening up to these issues came naturally to Quinn. “It really wasn’t [difficult] because everything this group has done has been deeply personal to me, it just used to be HEAVILY cryptic. Once upon a time I was deathly afraid to speak openly and candidly, but at this point I kinda don’t even notice.” Nowhere is this more apparent than on the track “Daughter,” which laments how self-destruction and overall life experience have left the song’s protagonist without the hope of ever starting a family or falling in love.

PEARS also employs clever wordplay and an acute sense of humor to soften the blow of these truths. Playful lyricism of this caliber is frankly lacking in a lot of punk rock, and it gives some levity to the songs. And truthfully, the most fun part of this album is hearing Quinn craft his own self-owns. In “Naptime,” he claims “I am a king but I sleep in a twin,” as he goes on to describe the codependent relationship he has with his bed. The meter and rhymes could be something out of a rap song, as in “Killing Me” where Quinn shows the world his “careful plan to to be sub-par/hindered Tinder profile star.” Quinn also tips his hat to one of the greatest pop songs of all time, “Mambo Number Five,” but replaces women’s names with his good friends Tito’s vodka and Hendrick’s gin.

“Traveling Time” is a leap for PEARS, but it still feels natural for the band.  “I think the only healthy way for a band to evolve is to… well, actually evolve,” Quinn said matter-of-factly. The song opens with a light, fuzzy guitar sound that leads into a chorus with vocal harmonies that sound angelic compared to the rest of the album. Guitar solos and bridges in this song are still the backbone of its sound, but they’re slower and more high-pitched, which gives it an overall more easy going character. Quinn was excited to finally show this side of PEARS.  “We’ve been playing with pop elements for so long, it seemed like finally time to let it have its day.”

Overall, PEARS’ newest album PEARS is the story of self-discovery: discovering what works for the band’s sound, as well as dealing with what’s right in front of you. Quinn views acting as a window into his own self-discovery and has brought that attitude to this album. “I love the idea of basically being licensed to perceive the world as someone else, and to let yourself disappear into that. I feel like I do it on a small scale with PEARS, but the character is always me, and frankly, I can’t quite figure him out.”