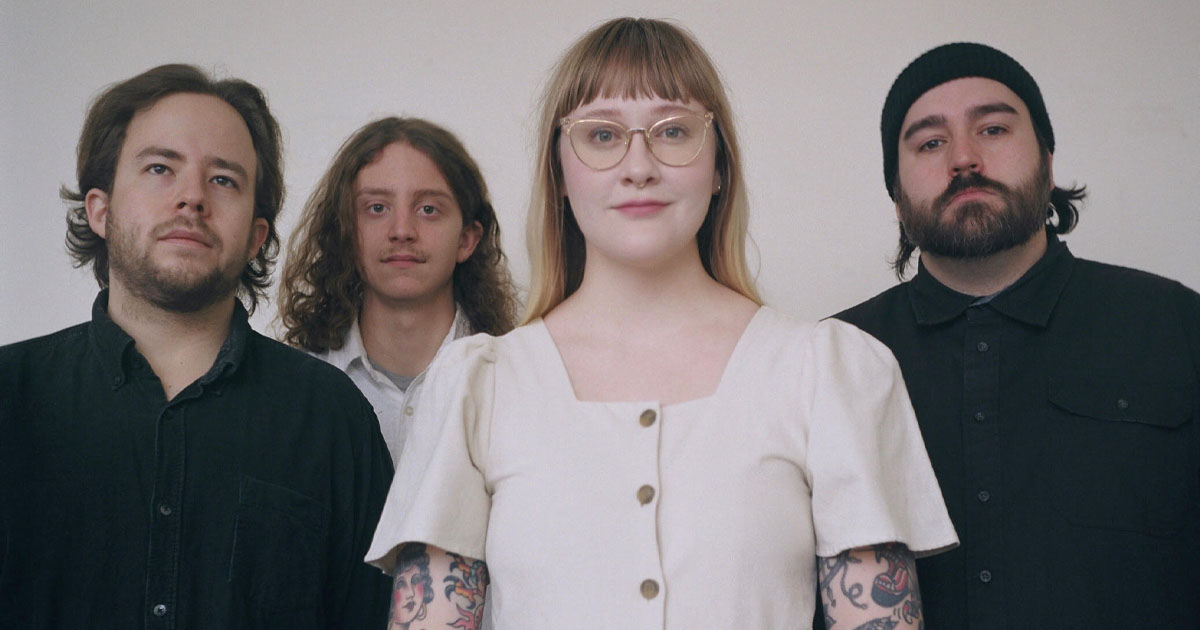 It’s difficult to ascribe a genre to Mundy’s Bay. But the more you scratch your head trying to pin them down as shoegaze, or pop, or indie rock, the less time you spend enjoying their unique sound and masterful musicianship. The Montreal-based group keeps their music fresh and unique through a collaborative writing process. Mundy’s Bay worked with Kurt Ballou (Code Orange, Joyce Manor) on their debut full-length, Lonesome Valley, out March 13th from Pure Noise Records. Tracks groove and space out at the same time, and are everywhere colored by lead singer Esther Mulder’s lyrics about longing and drifting spirits. I sat down with the band to discuss their new release.

Hard Noise: How does it feel to be releasing your full-length debut? Do you think it’s a good introduction to your sound?

Esther: It feels amazing releasing something we’ve been working on for a long time. I think it really accurately represents our range of sound.

Victor: It feels great! I think it’s a great introduction to how Mundy’s Bay sounds now. We spent quite some time writing these songs and took a very long break from playing shows in order to get the album we wanted to create. It might have seemed like a bad “career” decision but in the end we think the album rips, and that’s what really counts.

What non-musical art were you consuming while making this record? Did it inspire any part of it?

Victor: The great thing about God City is that you get to stay there while you’re recording. We watched many movies at night, but I would say we really had a blast watching Some Kind Of Monsters. Way to get in the mood! Seriously though, for my part I did a lot of catching up on French new-wave cinema and classic movies before we went in the studio. As many musicians before us, movies inspire us and I am sure we would love to score one eventually. Elevator To The Gallows has that great Miles Davis soundtrack, and it’s great to see a musician put his style out there and really change the movie with his sound. Neil Young did an amazing job doing the Dead Man soundtrack too, something I think we all hope to achieve one day!

I think we take non-musical inspiration mostly from friends of ours, we’re lucky enough to be surrounded by a great group of photographers, designers, painters and other artists and it’s so inspiring to be constantly amazed by our peers.

Esther: I have a career as a tattoo artist so I’m constantly looking at references and artwork. Although it didn’t inspire any of the writing, I feel like doing creative things influences creation in other mediums.

You draw inspiration from a lot of genres of music from low-fi indie rock to atmospheric post punk. Do you ever kind it difficult avoid genre clichés when pulling from different styles of music?

Esther: I don’t think we necessarily try to pull from specific genres of music, but our influences definitely come out in our music. We try not to focus too much on what genre we want to sound like and just let it flow naturally.

Victor: That’s an interesting question. I think clichés are clichés because in some ways they have developed the sound of a specific style of music. I love to think we use only the best aspect of our inspirations and create something fresh out of it. In some aspects, I also love some clichés. I love when a shoegaze band uses a nice reverse delay, when I hear sweet reverby drums or a classic Jazz Chorus amplifier. So I guess we don’t really avoid it, we just put our own sauce on it.

John: We are all influenced by different music in the band, so we are usually classified into genres that don’t make sense to us. But when you know our interests, then it becomes really obvious. So I guess we don’t really avoid clichés, whatever comes naturally ends up on a record.

This album is definitely a big team effort. What does each member of the band bring to the table?

Victor: It is! We’re happy it seems to come out this way with people experiencing the record so far. I think we all complement each other musically but also in how we operate the band. We’re all very active in the writing aspect of the band but also in all the other stuff a band has to do. John is our master night driver, Willy is our best co-pilot, Esther creates a lot of our designs, it’s all a big collective thing we’re doing.

Esther: In terms of writing, Victor, John, and Will are great at creating an overall vibe and construction of the song with instruments. I usually write the melody and lyrics based on their writing.

John: As for guitars, I like to see it as what I come up with is like a canvas, and Vic’s guitar playing is like a paint brush. Will’s bass lines really hold the structure together and bring a unique layer that even on its own is very interesting and enjoyable. Esther’s key boards are usually written in the studio, which is very cool because sometimes it’s a surprise, and tends to be the icing on the cake. Esther’s vocals evolve so much from recording to recording, she’s always bringing something new which is so fresh and exciting for us and the listeners.

Victor: We’re going to play some more shows in North America this year to promote Lonesome Valley as much as we can. We also want to write another record and experiment with new sonic horizons. As a band, we’re very thankful for the opportunities given to us and plan to create as much as we can in the future. I really hope we can reach Europe and the rest of the world in 2021, fingers crossed!

John: Tour with Hunny and Bay Faction in support of the release starting March 14!