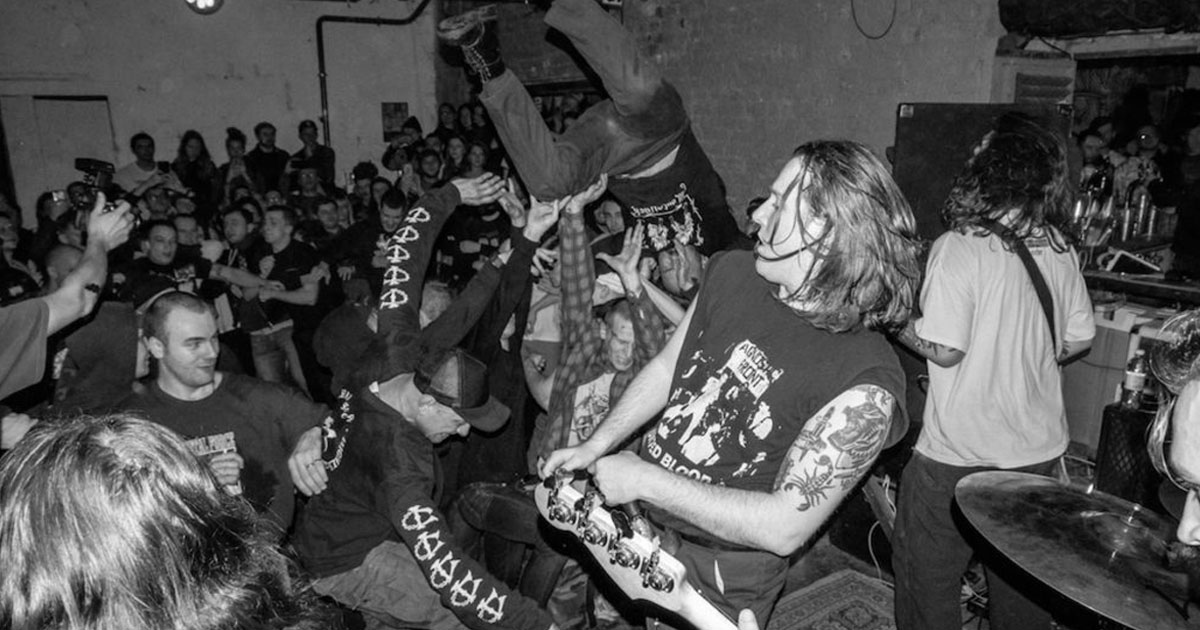 Big Cheese on Channeling Motorhead and Sick of it All, Growing up UKHC

UK’s Big Cheese was formed in the middle ’10s out of the same scene that brought to light bands like Violent Reaction, Chubby and the Gang, Crown Court, Higher Power (who share drummer Alex Wizard and guitarist Louis Hardy with BC) and more. Releasing the much revered Sports Day demo in 2016, Aggravated Mopery EP in 2017 and the Tower to the Sun Demo in 2018, the trio of releases were picked up by Painkiller (home of No Tolerance, Waste Management, Breakdown etc) and repackaged as the Don’t Forget to Tell the World 12″. From there the ripples in the water had turned to minor tides, which led to the band partnering with Quality Control / Triple B for the release of their debut longplayer Punishment Park.

Melding Breakdown metallic brutality and Warzone-y groove, Big Cheese have carved out a fun and jaw-clenching niche for their debut LP, and hardcore fans are starting to take notice. With all that in mind, we cornered vocalist Razor Hardwick about the debut, sharing members with Higher Power and UKHC.

In creating the basis of Big Cheese, what were the common influences and overall direction that you wanted to follow?

I think broadly we wanted to sound like something between Cro-Mags and Rest In Pieces during Big Cheese’s inception. Meg (guitar) had a bunch of stuff already written in that ilk and I remember being excited because I wanted to try a different vocal style to my last band.

Punishment Park is your first proper LP. How did you treat it differently, if at all, than you did other releases?

Following on from the last question, I guess through really gelling as a band at this point from playing live and touring a lot together, we have started to really come into our own sound and dug deeper in terms of our sonic style, i.e. incorporating British sounds, like taking influence from NWOBHM and other music. Punishment Park is a real collaborative effort and we’re all proud of the product.

What were the ideas and specific sounds you wanted to incorporate going into the making of the new LP? The drums sound especially roomy and bombastic

In terms of production, because it was a full-length, I think we wanted something a little cleaner but not too polished. I’m glad you picked up on the drums because to date I’m not sure I’ve heard a modern hardcore band with drums as big sounding as that. It certainly helps with having an amazing drummer like Alex, but we really went to town on them, placing about 15 mics on and around the kit. Our engineer Atko has the most impressive live room which helped us get that live/natural reverb, which we left in by raising the levels on the room mics.

Louis and Meg had slightly different setups and made use of Atko’s vintage amp and pedal collection. I know Meg listened to a lot of SOIA’s Just Look Around during recording and Joe nailed it on the head with his bass sound, channelling both Lemmy and Craig Ahead respectfully. The piano piece was based on a loose idea I had had for a little while and I just really wanted to have a go at recording something on Atko’s old upright. This idea stemmed from that Crumbsuckers interlude I think. Overall we really wanted the record to be kind of devastating and loud and evoke some kind of feeling of the end of the world.

Much has been made of UKHC in recent times. How do you feel like living in a less fertile scene than, say, NYC or the US in general has helped make you a stronger devotee to the style or a better musician?

Great question. I think culturally Britain has such a rich history and has always been a melting pot of styles and attitudes, and particularly when it comes to music. Although there’s no denying that there’s somewhat of a high turnover in terms of punters and gig-goers, maybe due to the mean age of people, but I feel grateful to have been part of such a flourishing scene for over a decade and of course like to think I’ve improved massively as a musician during that time. Styles of hardcore and punk in the scene evolve and change and go in circles, but I feel we’re at a really comfortable point here and that people are really taking their playing, performing and writing seriously. The proof is in the quality of all the bands playing out right now.

What do you hope someone who has never heard Punishment Park gets out of the record?

To date, what is the most personally important gig you’ve played with BC and why?

I would have to say Moscow, purely because it’s somewhere I never thought I’d get to go, let alone be invited to play there. That was by far one of my favourite gigs. A lovely city with lovely people and great bands.

With the busy schedule of Higher Power, whats the plan for Big Cheese? Will you do any touring?

Taking it as it comes one day at a time for as long as the coronavirus doesn’t hold us back lol. As soon as we can, we’ll be on the road!