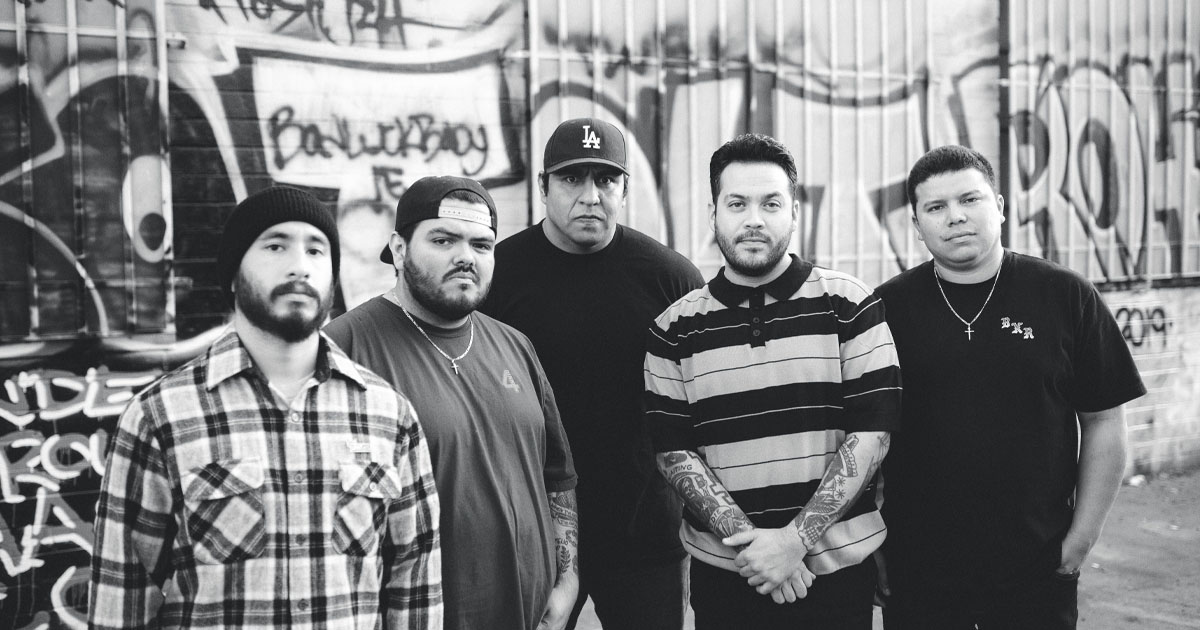 Song Premiere + Q&A: Rotting Out Look Trauma in the Face on Ronin

Hardcore is often birthed by conflict. It comes from a world of pain and frustration, and is used as a vessel to release pent-up aggression. L.A. hardcore crew Rotting Out are no exception to this rule; in fact, they’re the epitome of it. Their upcoming album Ronin exemplifies the importance of having explosive, cathartic music to turn to in times of struggle, and it’s their rawest material to date.

Hard Noise is proud to premiere the track “Stones,” the second single off of Ronin, which arrives April 10 via Pure Noise Records (pre-order here). Listen to the two-minute blast of unrelenting chaos here, and  read our interview with frontman Walter Delgado about Rotting Out’s hiatus, posers in hardcore, and therapy.

Walter Delgado: “Stones” is a very aggressive and angry song. I started going to shows at a very young age, and in the place where I’m from there’s a very ghetto and violent atmosphere. In the projects of Los Angeles, there’s a lot of gang activity, drug use, prostitution, violence, domestic abuse, and child abuse. This is what I was surrounded with. When I got into hardcore, it was cool because it didn’t involve all of that or glorify it. It was a change in pace and a different perspective, as opposed to a lot of rap that came out from places like the projects where they glorify certain things.

Then, there was a point where I started to notice that certain bands or certain people in the hardcore scene adopted the style of being from the ghetto. They started glorifying the grim and the dirt — just negative things that shouldn’t be glorified to begin with from ghettos when these people were not from there. They’re from suburbia wherever. Basically, they fronted that they’re from these areas when they’re not, and they’re glorifying things that I don’t think should be glorified. Things that ruined my perspective on the world and my perspective as a child.

So, this song is basically a big fuck you — you don’t know where we come from, you don’t know what this is, and you’re glorifying something you’re not from to begin with. This isn’t pretty and it’s not meant to be put on a pedestal. It’s just a matter of the situation, and people are born into this situation unwillingly. It’s a big fuck you to everyone who tried to adopt this ‘cool swag ghetto child’ vibe when they themselves are from suburbia.

There was a 7 year gap between Rotting Out’s last record, The Wrong Way, and this new one, Ronin. What happened during that time?

We did do a little EP called Reckoning in 2015, but it was three songs and two cover songs. Honestly, it was me losing the romance in the band and being disconnected and dissociating with a lot of things in my life at the time. I had been diagnosed with a couple things so I was struggling internally and with my mental health, so I just shut down and cut myself off from a lot of things. I couldn’t handle a lot so I walked away from the band for a bit.

In that process, I got myself into some trouble that put me in prison for eighteen months. When I got out of prison, I didn’t think we were gonna be a band anymore. When a band breaks up or takes a hiatus, people kind of lose attention. They don’t care as much and aren’t as interested and whatnot. I honestly thought the band was behind me. Then, Sound and Fury offered us a show. I didn’t have the confidence to think that anybody cared to watch our band, let alone watch us headline a festival. It took a lot of convincing from our friends, who were like, “Come on, do it, it’ll be a good thing,” and I said fuck it. I was like, if this turns out bad, then I told you so. The complete opposite happened, and I was very pleasantly surprised with the situation about how we were re-embraced as a band and how much people really gave a shit about our band.

That gave me the motivation to start writing again and to come to our members and be like: let’s write a record… It’s been a long time and I know a lot of us have things backed up especially creatively, and we’ve been holding onto things that we just need to get out of our system. And in the process, we wrote 17 songs, and narrowed it down to our favorite 10 and put it on the record. And this record is probably the most emotional one I’ve ever invested myself lyrically in. Musically, it’s a very fun record, too. Lyrically, it’s very dark.

Is Ronin the most mature and honest Rotting Out record yet?

Yeah. I went through a series of very bad depression in prison. I had to seek therapy. I joined a program — it was actually a drug program, and it gave us the opportunity to see a counselor and a therapist. I had to face a lot of trauma that I was never ready or even wanted to look at. Facing that took a lot of energy. I was emotionally exhausted for several months honestly, because it was a very aggressive program. We were going to therapy one-on-one for an hour, followed by group therapy, so we were averaging four hours a day, twelve hours a week. For most people, they just go see a therapist for an hour every couple of weeks. I dove right into it and it ripped me to pieces. At the same time, it gave me a whole new perspective of being more self-aware and what’s wrong with me and my flaws and my shortcomings. I can acknowledge that, and once I acknowledge what’s actually wrong, it’s halfway through the process of fixing it. You can’t fix anything if you don’t know what’s actually wrong.

With that, I was ready to be more open with the things that happened to me. On this record I talk about a lot of things I never thought I would talk about. Things I never thought I would reveal to people about myself that have happened to me. How I feel about myself. How I keep myself hostage in certain situations. Things like prison, a really bad toxic relationship, even the fear of being with yourself and being on your own. Everything came to a head and I just had to put a pen to paper and once I did it all started coming out.

What do you think people will take away from the record?