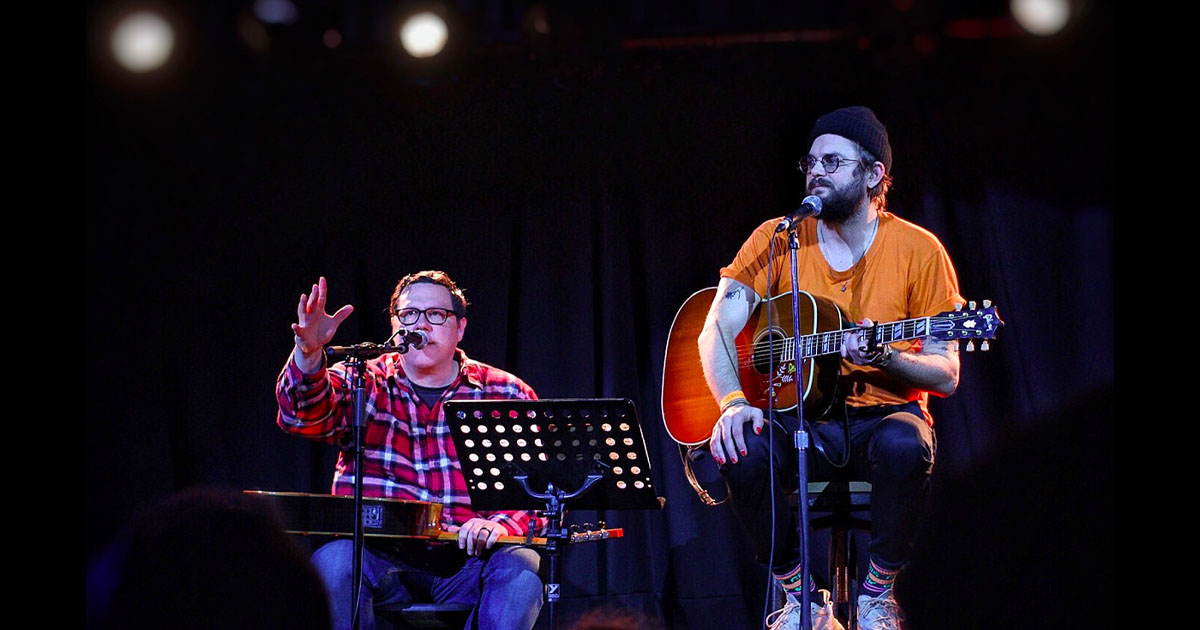 It’s the end of January, and Longboat Hall is silent. The Toronto basement venue is echoey and enveloping as comedian Nick Thune unassumingly emerges from the dark stairs to the stage. He informs the crowd how tonight is going to go down.

Nick Thune is a comedian who has always blurred the lines of standup comedy and music in a bespoke way. But he’s not traditionally the sort of performer that comes to mind when musical comedy is referenced, as he does not write comedy songs. There is guitar, and it is played in gentle lulling accompaniment to punny musings delivered with a sarcastic placidity. Since his 2014 breakout Netflix special Folk Hero, he has been steadily amassing a fan base of those who like their comedy delivered in an inside voice.

Damien Jurado is a singer-songwriter from Seattle who emerged out of the many musical sentiments of the ’90s. His career has spanned decades with volumes of records and collaborations. Although his songs range from hopeful to hopeless there, is one thematic anchor: they are not funny.

Neither is the story of how Jurado and Thune wound up on tour together.

Both were friends and collaborators of Richard Swift, the musician and producer who passed away in July of 2018. He had made one album with Thune and 10 with Jurado.

Swift’s life in music left an indelible mark on the two men. His death, the type of earth-altering grief that requires a change of scenery to mourn.

“I wanted to tour with Damien for selfish reasons,” Thune tells me the same night. “I love his music and I love the simplicity of his live performance. Also, the way we met at Richards Swift’s memorial service felt like it was meant to be.”

The result was the “Sad Music, Sad Comedy” tour,  a two-week multi city tour in the middle of Winter in places where it very much is.  Thune, who now resides in California, says the temperature matches the tone.

“As Damien says, ‘I like cold.’ My opinion is I like touring in the Winter because people want to be inside. I don’t care if they even like us… just glad we can give them shelter from the storm.”

Toronto is the second-to-last stop on the tour. Thune and Jurado hit a snowstorm on their way from Montreal earlier in the day, which causes some delay, but the show moves on.

Jurado approaches the stage at a pace that indicates he will get there when he is ready.  Applause waivers. Someone lets out a welcoming but entirely too loud “woot.” Social norms are already being disrupted, but quiet disruption is sort of the point.

Jurado draws the audience in with his stillness. Seated and silent, he tunes a classical guitar without apology or explanation. His cryptic lyrics and well-aimed pitch are being performed through fatigue and an honest, pensive melancholy that is his apparent emotional baseline.

As he performs a cross section of his material, the stillness continues to build, such that the cars on the slushy street outside can be sensed. When he performs “Ohio” from his 1999 album Rehearsals for Departure, the treat is relished by earnest fans.

At a momentary lull in an applause break, someone kicks over a bottle. It is a welcome distraction and sparks a sincere anecdote from Jurado about being in a fight that broke out following that sound at a hardcore show in  his youth.

During Jurado’s performance of  “Newspaper Gown,” off 2019’s The Shape of a Storm, Thune can be seen looking down from the balcony. He touches his eyes briefly. It’s too dark to see why.

Thune, although a humorist, does not wholeheartedly believe laughter is always the best medicine, especially in his movement through grief. “Humor is and has always been a coping mechanism for me,” he says. “I have been relearning how to feel emotions without turning to humor. In all aspects of life. Sometimes you need to feel things, and escaping into a joke doesn’t help forward progress.”

Jurado continues to perform his songs and, in an instant, shatters the calm and reflective tone he helped build in the room. He launches into a voice-cracking, enraged performance of “The Last Great Washington State,” a song that evokes visions of travel and suicide. Jurado’s wailing vulnerability electrifies the crowd.

Now many people are touching their eyes, and it’s still too dark to see why.

With no intermission, Thune approaches the stage. In a traditional comedy space, an opener who has just made the crowd tearful would be a detriment.  Yet this audience is warmed up in a different way: they are emotionally raw, and Thune welcomes the challenge.

“I have to apologize for my outfit. We had to go straight to the venue, I didn’t take my A.D.H.D medication, and I wanted to dress like a picture I found of Marvin Gaye playing soccer.”

The tension is broken and the mood begins to shift. Thune picks up his guitar and starts to perform a set best described as his “hits,” a combination of his best polished material from 2014’s Folk Hero and 2016’s Good Guy, the material he knows and is known for — what the people came to see.

Then, Thune begins to play the concept album. He puts the guitar down, sits on the side of the stage, and takes the audience on a ride over a rickety scenic bridge between storytelling and character comedy.  Thune weaves politics, parenting and paranoia into a few cathartic rants. A bit about the over analysis of private pre-school snacks warrants a woman who has been fairly reserved the whole show to grab the person beside her in silent laughter convulsions.

Thune’s new material acknowledges his shift in lifestyle. The days of broke open mics are far behind him,  but his relatability remains intac. For Thune, the shift in his work is organic and is rooted in his enigmatic philosophy of comedy.

“There may have been a period where I was trying to make something that I thought people wanted, and that got me nowhere,” Thune tells me. “I’m back to making what I want and what makes me excited to show people. Rather than, ‘I hope they like this thing I curated to their tastes.’”

As Jurado and Thune close out the show together, they share some stories from their tour. It’s the stuff of an indie comedy. “The valet got too friendly. He said, ‘I play music too. Used to play the trombone but my arms are too short.’ His arms were very short, and we couldn’t tell if he was joking.”

They perform a stripped down version of “Bully” by Richard Swift, leaving a subtle amount of memorial space on stage between them.  Thune concedes the stage to Jurado, who brings the experience full circle with a song, entitled “Trampoline,” about a playground revolution. A subtle call to action, whatever you make of it.

It’s time to leave. As lights and the audience’s noise wash over the space, one person is overheard saying, “I thought it would be funnier.” The other responds, “It can feel weird to feel.”

Published in Interviews and Reviews