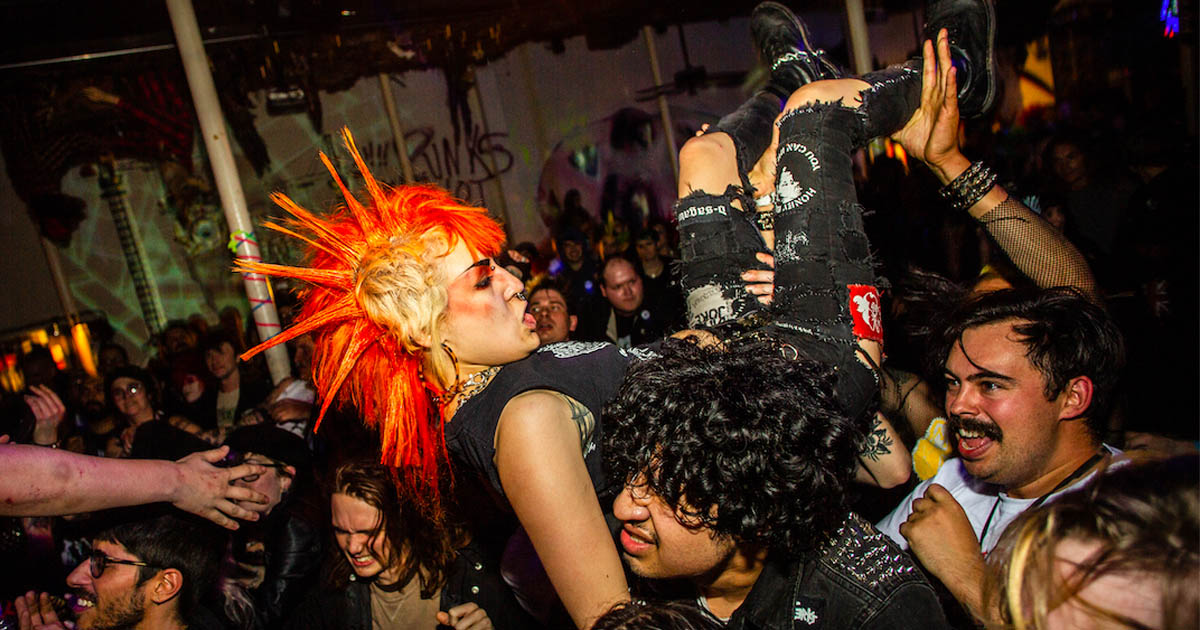 The tallest building in West Palm Beach is a Trump Tower (at just 32 stories, it’s really not that tall). I was hoping to make some broad sweep analogy about it lording over the heads of all the punks, then insert some idiom about repression and a random Crass lyric but you know, I don’t think I even noticed the damn thing. I’m here for day two of We Are The Punx fest, the third iteration of a South Florida studs’n’spikes affair which promised a solid weekend of chaos and general debauchery.

I’ve made the twelve-hour-plus track Southward with Richmond, VA’s own No-Heads (a Clash-meets-Blitz-meets-the-early-years-of-Fucked Up band that you should really get into) who are slated to play two shows, one of them an early afternoon Punks With Tattoos event featuring the Sewer Slutz, Revolt, Alcohol Fueled and Japanese pogo till you puke stalwarts The Erections. As someone who lived to tell the tale of New York’s Beer Olympics as well as the East Coast Pogo Attack, it was everything I could have hoped for: a healthy selection of brightly colored mohawks and beautifully adorned jackets ripping and raging to a cacophony praising a Dionysian lifestyle. It was a brilliant and absolutely glorious afternoon, setting up the evening’s festivities perfectly.

The night show takes place in a venue named Respectable Street and it’d be too easy to make a quip about that but let’s just say its a lot nicer than C-Squat. The evening starts with quick and solid sets of bouncing assertive street punk from Antifaces, Brute, and Perdixion, a quick amuse-bouche to set up North Carolina’s Adderall who hit the stage in a vicious swirl of snarling American hardcore punk like a hammer to the skull. Concluding their set with an incendiary take on the Germs’ “Lexicon Devil” caused a near nuclear explosion of mayhem, setting the table for the rest of evening. Florida’s own Horribles hit the stage next, ripping through quick blasts of UK82-inflected street punk with a twist of ska and hardcore. The highlight, of course, was their song “Welcome to Florida.”

No-Heads followed the Horribles, and it was yet again another example of a night filled with contrasts. While the pleasant Floridians provided us a set of quick-paced, fun punk, the vibe of the Richmonders was decidedly more menacing. There is a complexity and intensity to the songs which provides a stark contrast to their predecessor in the line-up. It sets the table perfectly for NYC’s Haram to stalk the stage, a rhythmic whirling aural assault on all punk and American pretenses. Vocalist Nader speaks only Arabic during their set. Their songs ebb and flow into each other, rising and falling perfectly in a a lyrical exploration of what it means to be a Muslim American in a post-9/11 world. And yes, people lost their complete and total fucking minds. It was glorious.

While they weren’t the headliner, the clear standout for me was New York’s Warthog. Is there a better New York hardcore band? A better American hardcore band? For my money, abso-fucking-lootly not. They hit the stage looking more like five dudes seeking to break your jaw with a madball than to entertain you with delightful little diddies. From the pummeling start of their set with “Corroded” to the Hawkwind-esque groove of “Brainwasher,” it was a relentless attack of ferocity and unhinged brutality, whipping the entirety of the crowd into a stage-diving, thrashing, and banging mob. It almost felt silly to transition back into the more pop and melodious strains of duel headliners the Lower Class Brats and Blanks 77, but that’s where the journey took us. There was nothing bad about these two veteran band’s sets — in fact, they were both perfectly delightful and the kids sucked it down like the sticky sweet punk tinged with pop that it is — but the overarching chaotic vibe was replaced by one where stage divers rode an inflatable killer whale.

The evening ended the same way it began: like a party. Punk often takes itself so seriously, and sometimes we forget to just enjoy. We create these events and this noise to provide a space for our own sanity and enjoyment just as much as to lash out at the world around us. It’s this duality which is so important to the underground to keep itself vital, fresh and fun. So, yes we are the fucking punx, or the punks, and like Filth said, “don’t ever pretend to be something you’re not, don’t be afraid to show who you are, don’t let yourself be used… remember that society fucking hates us, we are the fucking punks, don’t let them ever forget…”