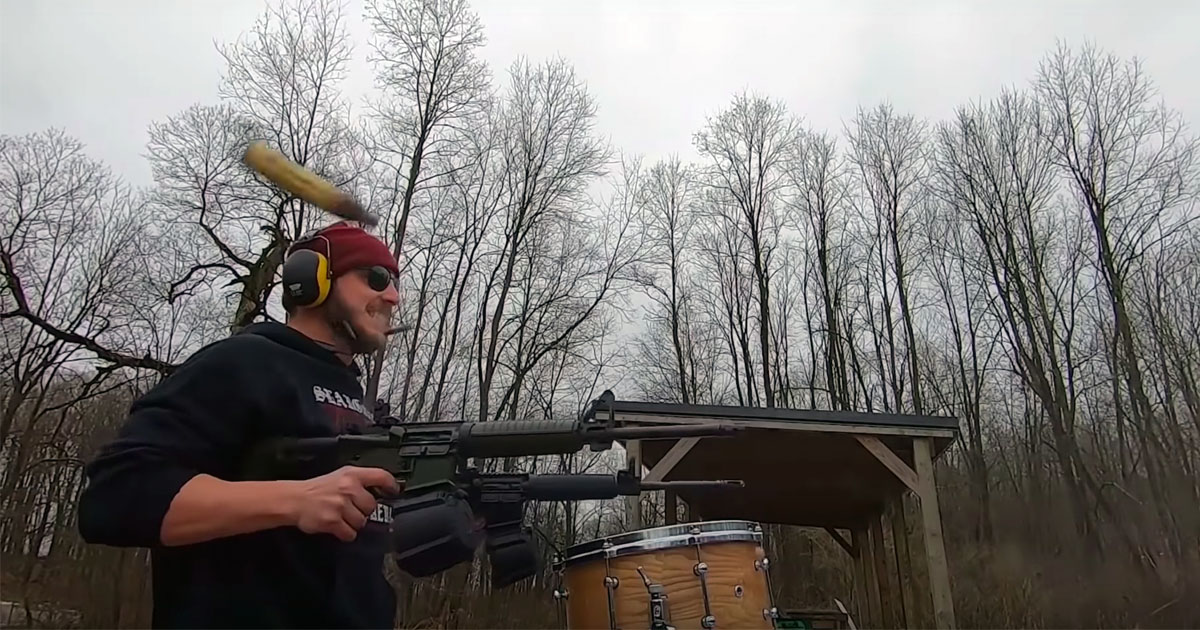 Gun Drummer Nate Wilkinson has gone viral for shooting semi-automatic rifles along to songs such as Lamb of God’s “Laid to Rest” and Slipknot’s “Psychosocial,” but it all started with a decidedly different track: “Thug Luv” by Bone Thugs-n-Harmony featuring Tupac.

“You can hear there’s a handgun racking and then firing twice,” explains 28-year-old Wilkinson. “I just did that with my 9[mm] on my porch.”

He was 15 at the time, which is not that surprising when you consider he had already been shooting for a decade (yes, since 5) and it was also the year he began playing the drums. Though he’s never played in a band, he takes percussion practice very seriously these days; nailing it on his actual snare drum in rehearsals ensures he’s ready to one-take a new (video) shoot, instead of essentially lighting up money.

“When I first started doing this I way overestimated my skill, especially with the equipment that I had,” says the marksman, recounting his attempt at After the Burial’s “Lost in the Static.” “I went out there and just went for it, like didn’t practice or anything, was hitting the quadruples on the snare, picked up the ARs and tried to hit that quadruple, and it was like the hardest thing ever [laughs]. I did eventually get it, but it took me — I think it was like five or six hundred rounds before I finally nailed that one.”

He predicts that cost him “at least over a couple hundred bucks for sure,” but these days he’s got a strategy on picking songs. After ensuring there’s room for a build-up on a snare and time to switch to his less traditional percussion pieces, he loads up a different weapon: his computer.

“I get on Microsoft Word, and I just follow the rhythm on the keys, then do a word count and that tells me how many bullets it going to take. That’s how I know when I’m going to have to switch guns or where I’m going to run out [of ammo] or whatever.”

Alternating right-to-left prevents Wilkinson from having one gun run out of ammo before the other, as has his increased magazine size. Lately, he’s been rocking 60-round drum magazines, which he can be heard loading throughout our interview. It’s a big upgrade from his original 30-round capacity, as are his lighter triggers, which fatigue the fingers less when shooting quickly.

He thinks these upgrades and practice could help him now pull off the one song that bested him: the ending of Impending Doom’s “More Than Conquerors.” He hasn’t really struck out on one since, thanks to better intuition as to what is achievable. It’s why he has yet to attempt the oft-requested “Bleed” by Meshuggah. Despite being able to play along to it — he pauses mid-interview and taps it out with his fingers— technical limitations prevent him from going faster than the aforementioned After the Burial or Impending Doom songs.

“As I keep moving forward and get better equipment, it’s just going to get faster and faster and faster,” he enthuses. “I’m going to take this thing to the extreme and just get belt-fed guns with hundreds of rounds, and we’ll just go forever.”

Speed and length aren’t the only upgrades Wilkinson has in his sights. He recently started having bands out to the Ashland, Ohio range with him. Slaughter to Prevail, Enterprise Earth and Brand of Sacrifice were some of his first guests. The latter were the first band ever to appear in their own song’s cover video, while the former’s Alex Terrible prepared for a future video segment by learning to dual-wield; the Gun Drummer hopes to have protégés cover their own songs. He’d also love to have a band set up gear and jam a breakdown, have multiple people firing on the same part or even shoot a music video.

There will be roadblocks to this, though, especially when it comes to new shooters trying to use the fine motor skills required to nail a gun cover. As a seasoned shooter, Wilkinson describes firing guns as therapeutic but notes the adrenaline comes out when he knows he’s shooting a video set to be viewed by thousands—if not millions. This is compounded by external factors like the weather, which can range from cold and snowy to windy and rain, and anywhere in between. Add to that other difficulties, such as ensuring he walks into the frame at the right time and plays the snare dynamically (despite being unable to hear it), and you’ve got something that looks a hell of a lot easier than it is. He’s reminded of this whenever he goes to shoot another video.

“Every time I go do it, I’m like what the hell am I doing? This is insane!”

Insane or not, Wilkinson keeps his head on straight when it comes to his priority: safety. He reiterates that point over and over — almost as often as I hear bullets clink into a magazine in the background — clarifying that despite looking “wild and dangerous” in the video, he’s shooting toward the side of a massive ravine and guests are instructed on safe practices before ever picking up a firearm.

Contrary to the popular phrase, this time the best defense is just good defense. This is especially true for someone wary of being dogpiled from both sides of the gun debate.

“The gun community is going to be like, ‘Wow, you’re being irresponsible. What are you doing? You’re a bad example,’ or whatever. Then there are the people that are inexperienced with firearms or they don’t know much about them or they’re afraid of them, and I worried they’d be attacking me just for using them on the internet, but actually surprisingly it’s just been overwhelmingly positive from every angle. It’s nuts.”

“That’s nuts” is a regular reaction to the videos, with Wilkinson getting particular joy watching first-time viewers’ brains stop for a second when the guns come out. It’s the kind of moment that encouraged Willie Adler of Lamb of God to leave a comment shortly after his first-ever video went up and Shavo Odadjian of System of a Down to share the “Toxicity” cover. There’s a reason these videos continue to go viral, and Wilkinson’s got it nailed down.

“I think that it’s just so fun that people can’t resist it. I’ve seen countless comments where people are like, ‘Wow, I really hate guns, but I love this,’ or, ‘Wow, why do I love this so much? I feel guilty,’ or something because it transcends that gap there. We’ve got metal, which we love, and then it’s got firearms that aren’t massacring anybody or they’re not being used in a crime. They’re being used safely for recreation, and I think it’s just the perfect mix to where it just kind of disarms people.”