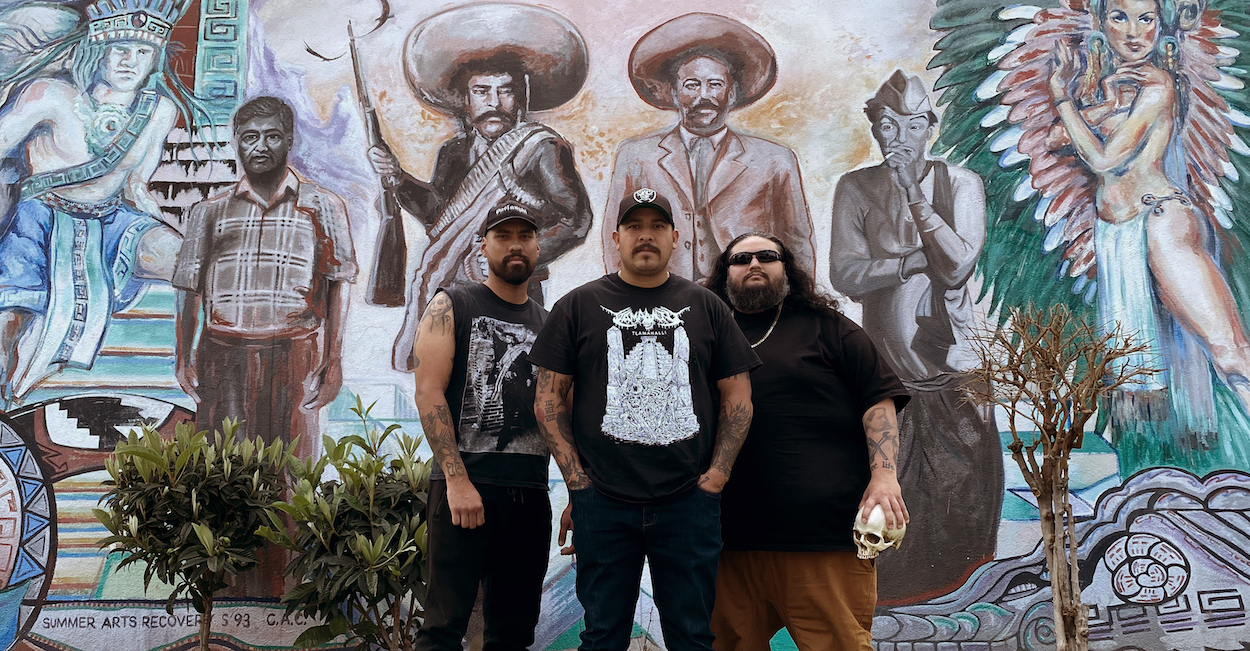 To many, the name of the game in hardcore is to create the most unrelenting music possible, and as such we’ve seen crossover into black metal, thrash, death metal, industrial, pagan folk, power electronics and virtually every genre under the sun. And while those cross-pollinations have borne some very interesting fruit, nothing has quite lived up to the sheer unrelenting brutality of California’s Xibalba.

Formed in 2007, Xibalba takes hardcore, adds in the groove associated with Pantera and Sepultura, and ups the ante — creating a sound that owes a debt to all of the above as well as classic death metal influences. It’s a natural progression from early forebears like Breakdown, Cro-Mags, Sheer Terror, Confusion, Merauder and more — a lethal style that’s readymade for pit destruction.

Now readying a fourth LP for release via Southern Lord, Xibalba will release Años En Infierno in late May (preorder here) and have primed the world with “En La Oscuridad.” Tipping its hat to bands like Demilich and Bolt Thrower, the latest single is a bulldozer of death metal that keeps a hardcore center, making sure to acknowledge the band’s roots while stepping further down the extreme music rabbit hole. With said new LP on deck, we talked to Xibalba frontman Nate Rebolledo about the band’s progression, working with Arthur Rizk and a possible hiatus after the new LP. The results of that conversation are below.

Años En Infierno is due in late May. What were your goals for this record as opposed to other releases?

As far as the music goes, to simply continue the progression of the band and our sound. Physically, we honestly have no plans due to personal lives.

How did you arrive at Arthur Rizk for this LP? Seems like a lot of other aspects of the production stayed constant from record to record.

We have recorded almost everything with our friend Taylor Young of Nails/Twitching Tongues at the Pit Studios. After a decade of redundancy, we simply wanted to try something different. Arthur is a great friend whose musical style and recordings we respect — it was a perfect match. As far as the production of the record, we aren’t reinventing the wheel, so we do what we do best and progress. We are genuinely happy with the outcome of the record. Only to be played at loud volumes.

Is there any truth to the rumor that Xibalba is taking an extended hiatus following the release of this LP and the conclusion of the promo cycle? What are your plans for the future?

Xibalba has been a band for almost 14 years, it has dictated our lives, all that — all that is great and equally bad. The band is conceived of best friends doing what we love, but responsibilities for years have fallen to the wayside and we simply can’t do that anymore. There is one thing I do know, Xibalba has done it right and I’m extremely proud of that. Xibalba is forever. As far as live shows in 2020, we have a handful of shows planned stateside as well as a couple of international shows. As for the future, if it matters, we may play, but I wouldn’t count on it.

Yeah, we definitely dug a little deeper into what has influenced this band for years. When this band started, we were the odd man out, but you can see the resurgences and it’s awesome. The one thing about extreme music to appreciate is that it is sincere. A true art form that isn’t for the masses, but those that truly are different and appreciate their certain format of musical taste. So shout out to all the young bands, too many to name but today I listened to Teeth and Frozen Soul. Check them out!

Lyrically and on the vocal side, what has been an inspiration as of late and why? Did you apply any of the ideas to the new LP in any way?

I mainly tend to write about all the bad shit in my life, things I hate, and on a positive side, my pride in my heritage. I remember writing Hasta La Muerte and remember it being one of the darkest moments in my life. There was so much pain behind that record and touring cycle which led us to stop touring. Since then, it has gotten a bit easier, but still puts me in a negative state that I don’t enjoy. Thankfully for the newest record I’m in a positive place in life where the side effects aren’t prominent and I have Jason and Brian who took some of that weight. The lyrics have always been honest, sincere and in some cases incriminating.

How has COVID-19 hurt you, your friends, the band or your family personally?

Mannnn fuck COVID-19!! I work in live music and it has put our industry into a a complete stop. Who knows when I’ll get a check again, but thankfully I saved money and I grew up learning how to ration and only live off necessities. The future is unknown — our record release shows are cancelled and my heart goes out to everyone. Scary times, but hopefully this whips out government structure into shape.