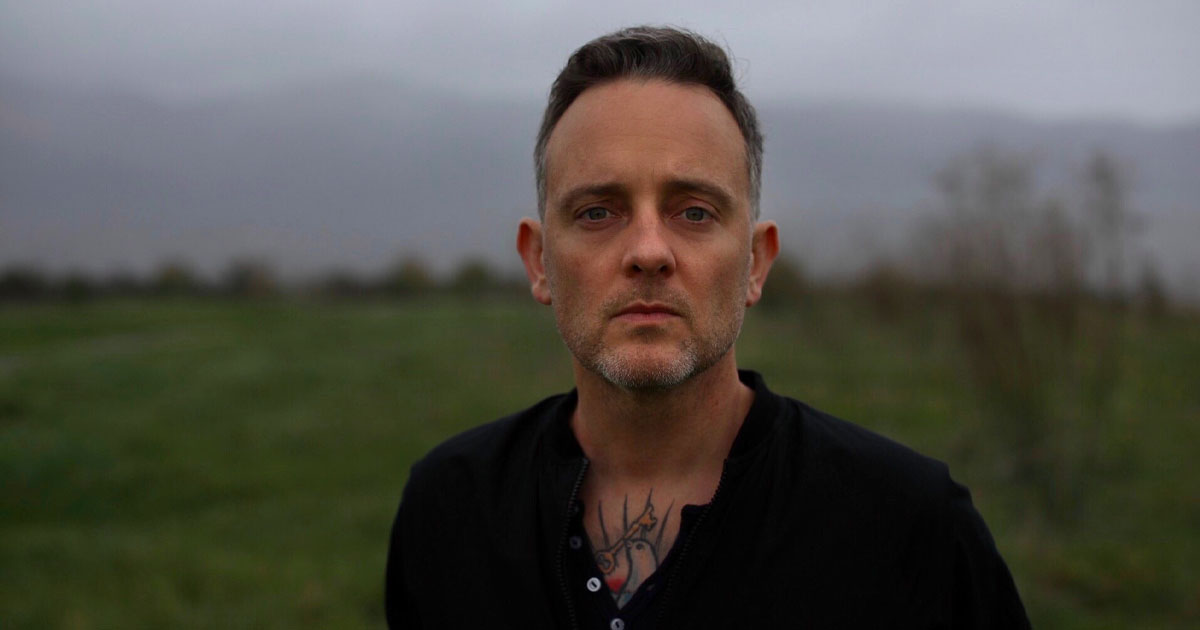 Dave Hause on Virtual Concerts and Defining the Philly Sound

Dave Hause spent the late ’90s and early 2000s playing in bands like Curse, Paint It Black, the Falcon and The Loved Ones before striking out on his solo career in early 2011 with his album Resolutions. He’s toured the world on the strength of his heartfelt Americana style injected with the energy and passion of the punk bands he grew up on in Philadelphia. Hause plays shows with his brother, Tim, who was instrumental in bringing his latest album to life.

Kick is a full-throated celebration of the underdog that became an instant classic. Hause’s songwriting carefully walks the tightrope of staying positive in spite of financial crashes and working class grinds. Now living in Santa Barbara with his wife and 15-month old twins, we spoke to Hause about fatherhood, the Bouncing Souls, and his persistent optimism in spite of it all. Answers have been edited for clarity and length.

HARD NOISE: You had to end your recent tour prematurely due to the Coronavirus. How are you holding up in quarantine?

DAVE HAUSE: It’s a little hectic. Canceling the last three shows of our tour was pretty brutal. Those were the biggest shows of the tour, so we took a substantial financial hit. Just emotionally that whole week was pretty fraught. It was my 42nd birthday and that morning we cancelled Philly, Boston, and Baltimore. Having to send everybody home and worried about everyone’s safety, it was rough. My wife and I have 15-month old twins, so being with them all day is a great distraction. It’s pretty constant activity and really joyful. It’s good for me, cuz these are the kind of things I fixate on. During 9/11 or the financial crash, [when] earth-shattering events happen, I do have a tendency to spiral out. I don’t have time to because I have my kids running in two different directions all the time. That’s been a welcome reprieve from the prison that my brain can be.

HN: How did it feel performing a virtual concert?

DH: That was great. I think that all of these platforms are having trouble keeping up. I was trying to mitigate some of the financial pulverizing that I took at the end of the tour. I was also trying to bring a little light into the world. It felt like people needed somebody to sing to them. I don’t necessarily know if I’m always that guy, [but] it seemed like people were really excited about it and touched by it. I thought that was really cool. Everyone says to use Facebook Live and Instagram Live, and ultimately I probably will, it just doesn’t seem like those companies give that much of a shit about artists. So I did mine through Stageit, cuz they care about artists. I’m gonna do another one with them in the coming weeks. People are kind of throttling people with content now, so I may just take a step back and let everybody else get in there. There’s people doing a show every single day! But I don’t feel compelled to do [that.] So I’ll do another one in a couple weeks or a month and give people something to look forward to and sing along to.

HN: Is it nice to take a step back like that?

DH: Yeah, honestly one of the biggest shifts that’s happened since having my kids is that it’s such an ego-less process hanging out with and raising children, because it’s so much about them. And I love that! The rock and roll business is not, it’s every egocentric. The demand on your ego even to play a show is there. Ego is the enemy of anything beautiful that I’ve experienced. For me it’s really great to step back from that world, it’s just been good to put things into perspective. And so I welcome the breaks cuz I didn’t used to take breaks, I just used to go and go and tour and tour and tour so I don’t know that that’s always so healthy. I’ve been trying to lean into the rest and spend time with my family.

HN: What’s changed in the year since Kick came out?

DH: I’ve never made three albums under any moniker, with The Loved Ones, or Paint It Black. So to have one out with Bury Me In Philly was a big change. To bring a band out and have that succeed enough that we could live off of it was exciting. And then to get to a fourth album was even more like “Whoa, this is something I can hang my hat on.” I guess it’s a reminder to keep going. We put the record out, toured a lot on it, toured with Bad Religion which was real unbelievable, to do 25 shows with them.

The more records you make, the more encouragement I’ve felt to keep the conversation with the audience going. That’s the biggest obstacle often, is wondering “If I put this out there are people going to respond and is that the point?” You can get really caught up in the mire. I think putting Kick out and being able to tour so much has been a real treat.

HN: A lot of your songs deal in equal parts optimism and desperation, particularly “The Ditch” and “Saboteurs.” How do you strike a balance between those two emotions as a songwriter?

DH: I toured with the Bouncing Souls for years before I was a professional musician, I was their roadie. I toured with them in one of their darkest periods they put out Anchors Aweigh. And they always managed to put that silver lining in cuz it was important to them and it kind of rubbed off a bit. I guess for me, trying to put hope in is the point. If it’s hopeless, why book the show? Why write the song? There’s gotta be a reason to keep going, or why did you buy the record? I don’t want to put too much importance on it, it is just songs. But for someone who’s set my compass to the arts and creative endeavors, it is important to me. As much as it feels like we’re despairing, you want to put a reason to get up in the morning in there. I always think of records that I love that are completely dark and I love them but I don’t listen to them. I don’t listen to The Downward Spiral by Nine Inch Nails. Even though I think it’s an amazing record, I can’t go there anymore. And so I don’t want to make an album like that. It feels a little irresponsible to the people in my life that are important to me, I don’t want to put a hopeless thing out there.

DH: It’s great, he is really melodically adept. He’s great with a turn of phrase, he’s really good at simplifying ideas and boiling some of my initially cumbersome ideas down to their essence. And I’m just able to work quicker with someone that I trust that deeply. Songwriting is super personal and in the process you can feel like all your clothes are off. It’s a much more comfortable situation when you have a family member that you love and trust who’s also super talented. Tim, musically, can run circles around me. It’s been this blossoming relationship that I didn’t ever really count on. He’s so much younger than me, 15 years is a big gap, but music has really closed that gap. He showed me a song on the last tour you could hear Adele singing, it’s incredible. At some point we might have to rebrand it as the Hause brothers but for right now he’s cool with me at the mouthpiece of the whole endeavor, and he’s contributing these awesome ideas to the pile. That’s where we got the chorus for “Ditch” and so many other really cool bits.

HN: How did Philadelphia shape your sound?

DH: It seems like there’s more of a distinguished Philly sound now then when I was coming up. There’s definitely a chip on Philly’s shoulder, stepchild to New York and DC. The Roots developed and put their stamp on hip-hop but in terms of rock and roll, there’s not that many exports. There are now, but they’re more peers or people my age or younger. I just think the attitude of the city had more of an impact lyrically. That sort of working class struggle, that along with the redemptive stories of religion—those get in your blood and you can’t get them out. I think that upbringing, Evangelical Christianity and whatever that did to my psyche along with the struggle of being a working person in a capitalist society that constantly needs to grind people into money, those stay in the blood of what I do. Sonically, I don’t know. I just grew up listening to rock and roll music, Bryan Adams stuff like that, and then got into punk.

Punk has how I learned how to play. I ended up with this bastardized version of both. Bryan Adams fans are like, “Why is this so fast?” And punk rock fans are like, “Why does this sound like ’80s rock music?” It’s nice, there are peers [of mine] that have taken this type of music to mainstream success that you can see a path forward, but it is peculiar. The bass player in The Explosion [Damian Genuardi] came to the record release show we did in Brooklyn. He said, “What is this music you’re playing? What is this called?” He goes, “Think about grunge, grunge was obviously just rock and roll music and they renamed it grunge and it became a sensation. You guys don’t have a name for this. It’s not punk, but rock and roll would be the wrong thing to call it.” I think he was talking about Brian [Fallon], Dan Adriano, all of our friends that grew up in the late ’70s or early ’80s and have all that melodic stuff in there but also came of age playing in punk bands. Hot Water Music and the Bouncing Souls gave way to this, but they’re more punk bands. They wear that proudly. I think Damian’s right. We need a broader term! Flannel music! They’d say I’m into flannel music. [Laughs]

HN: As a guy who grew up in punk bands and ended up combining that with a singer/songwriter vibe, what do you think those genres have to learn from each other?

DH: I’m somebody who was raised with The Beatles and Bob Dylan and Tom Petty and Bruce Springsteen, stuff like that. For me it’s just all rock and roll. To me punk was just cranked up and had a chip on its shoulder to the bloat of the ’70s. I spend a lot of time breaking down songs on an acoustic guitar. A lot of it’s really similar, it’s just the speed or volume at which you play it. A lot of it comes from people without a voice trying to get their voice heard. Hip-hop is such a part of that, the whole American music conversation. I think a lot of it has to do with class, people struggling and punching up a little. Those genres are more similar than not.