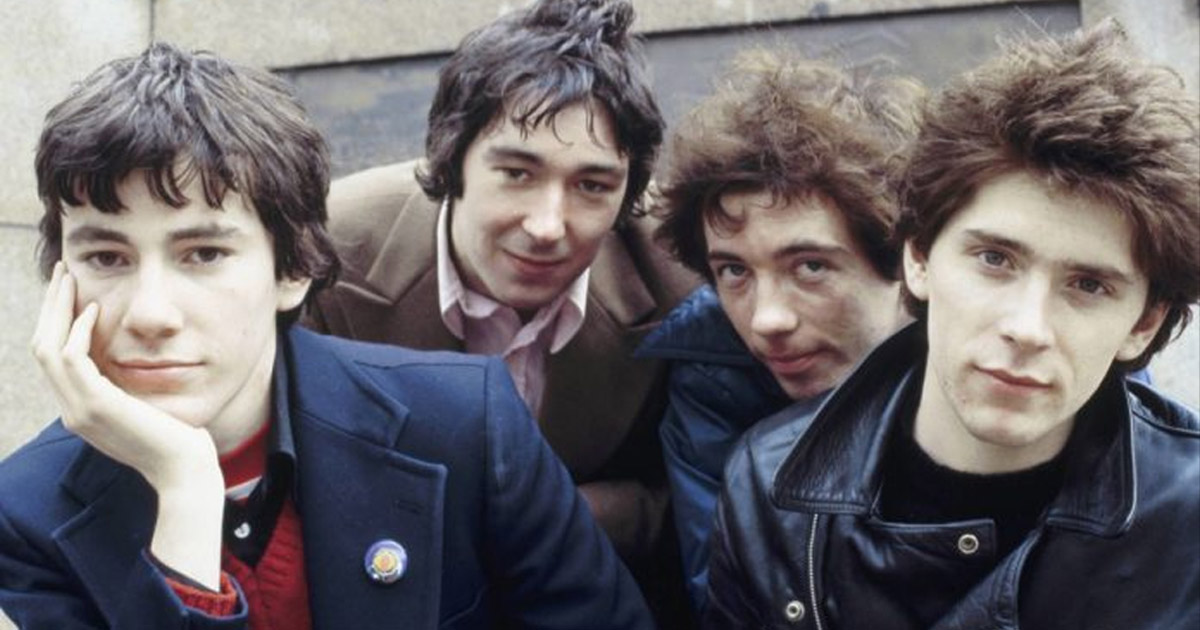 Pete Shelley is dead, but Buzzcocks live on. Steve Diggle is pretty certain Shelley would have wanted it that way.

For decades, Shelley shared the co-singer/songwriter/guitarist role with Diggle, but with Shelley’s death from a heart attack at 63 in December 2018, Diggle — as well as his mates for ten years, bassist Pete Remington and drummer Danny Farrant —  was left adrift.

“Initially, I had to deal with the emotional shock of Pete dying,” Diggle told me recently. “Being there from day one, we experienced a lot of things together and were very close. It was a difficult thing to deal with personally, but most Buzzcocks fans were very supportive and said ‘Carry on.’ This was a big part of my decision to continue.”

Diggle is only semi-joking when he calls this version of Buzzcocks Mach 3, figuring Mach 1 to be the brief Howard Devoto era and 2 being the long Shelley-led skein.  (It’s fair to say Shelley was the No. 1 singer and songwriter and Diggle No. 2.)

“As soon as we got together,” says Diggle, “from the first rehearsal with Howard Devoto, it worked. I knew this band had magic, had dynamics, all kinds of things you need to be a powerful group. Almost without trying. That set the tone.

“When Howard left [to form Magazine], the same question was asked: ‘Are you going to carry on?’ Both Pete and I said yes. So, this situation has arisen before. Now, we are in a new phase of Buzzcocks carrying on the legacy and also making new music. Ideals change and adjust every day, as does life itself. It’s just a matter of having the realization that this is the band now. We have just done a British tour, which was amazing and justified keeping the band alive. Tomorrow is always a new day.”

Diggle was planning on bringing Buzzcocks to the US, specifically the West Coast, in May, keyed around the Punk Rock Bowling & Music Festival in Las Vegas. That was, of course, pre-COVID-19, when this interview was done. Other gigs were slated for Los Angeles, San Francisco, San Diego, and Seattle. They relaunched as a recording band earlier this year with their first post-Shelley single, “Gotta Get Better”/”Destination Zero.” Although it’s the three remaining members pictured on the sleeve, Diggle says they have a fourth now, a guitarist and backing singer who goes by the one name of Mani.

“Live, it’s essentially a four-piece,” says Diggle. “Singing a full set is no problem to me as I did that with my band Flag of Convenience and my solo band.” Flag of Convenience, with ‘cocks drummer John Maher, was Diggle’s main outlet after the band split in 1981. Shelley went solo with a new wave synth/pop sound and scored with the sly “Homosapien.”

They re-united in 1989 and Diggle told me then: “The very nature of the beast, Buzzcocks, has got the flavor of the time. It was a magical moment in time, especially when that first album came out. History was changing. The whole world was changing.”

“We realized we have been blessed with really good tunes.” Shelley added.

Funny little anecdote: With Buzzcocks back together  and considered well-respected men of punk — I asked Shelley, whether back in 1976, he could have envisioned being a Buzzcock at this point in time. “Well, no,” he said, “but when we started in ’76, we didn’t think by ’77 we’d be still going.”

I suppose at every post-1980 juncture I’ve talked with Buzzcocks, we’ve all marveled how this thing — what we thought of as a young person’s game — turned out not to be that at all.

So, let’s backtrack, shall we?

Buzzcocks were on the front lines, among the first wave of punk rock warriors. In 1976, Buzzcocks became the first English punk band to make an indie record, an EP called “Spiral Scratch.”

After Devoto exited in 1977, Shelley became the main singer-writer and Diggle the secondary writer-singer. Buzzcocks had an incredible run early on. Those three albums, Another Music in a Different Kitchen, Love Bites and A Different Kind of Tension, came out over the course of just two years, 1978 and 1979. They also released a batch of killer singles, including “Orgasm Addict,” “Promises,” “Everybody’s Happy Nowadays,” “Harmony in My Head,” “Ever Fallen In Love (With Someone You Shouldn’t’ve) and “What Do I Get?”— some separately, some included on albums. The Singles Going Steady collection is a must for any serious punk rock fan; Buzzcocks B-sides were often as good as their A-sides.

Buzzcocks were masters of barbed-wire guitar riffs and tension/release arrangements. Diggle’s “Harmony in My Head” may be the quintessential ‘cocks tune. Riding a riptide of melody and frenetic rhythm, Diggle’s searing observation that “Life’s little ironies seem so obvious now” slams home. And of the ad world’s influence on us: “Your thoughts are chosen/Your world is advertising now!” A song both bitter and euphoric.

Shelley and Diggle both wrote witty, questioning lyrics and set them to (what were at the time) breakneck rhythms and soaring melodies. They were nasty, but neat; direct, but elliptical; agitated, but warm. Or, as Shelley cryptically told me after one blistering set, “We’re not a statement, we’re an adjective. Each time we play it’s like an accident in creation.”

They were geniuses of the quick-hit pop song — two and a half minutes (if that) and out. But one of their best is the seven-minute “I Believe,” a longtime concert-closer. It’s a series of stated certainties, some irrational, some profound, that Shelley dismisses at the end with “And I’ll be leavin’/What I believe in.”

“The song was all about paradox,” Shelley told me some years ago. “That just because you believe something, doesn’t mean it’s true. I was cataloging things, like ‘the elixir of youth’ and ‘the absolute truth,’ and ‘the Final Solution’ and ‘the Workers Revolution.’ Those [last two] would be discredited.”

“I think if you start asking questions, that’s better than giving answers,” Shelley continued, of his songwriting. “That’s the Socratic method. It’s what life’s about, posing that question … until finally you stumble on the right idea.”

Yet, Shelley was happy enough to pass the (dis)credit around. “’I Believe’ is just a ditty, a pop song, a rip-off of the chords from Yes’s ‘Starship Trooper,’” he said with a laugh.

Buzzcocks released their last studio album, “The Way,” in 2014, and it was a damn good one. Two years after that, Diggle sent me an email saying Buzzcocks were almost ready to record (and then tour) if only Shelley would get off his lazy arse to write more tunes. Shelley died two years after that and now, of course it’s Diggle’s baby.

So, we talked, both on the phone and then by email.

Hard Noise: There’s always this question of legitimacy, which is raised when any band loses a prominent member and others soldier on, flying the same flag. Legally, they may have every right to the name and to continue doing what they’ve been doing, but sometimes certain fans take umbrage as if that’s somehow a betrayal of the band’s ideals or an attempt to keep cashing in on the brand. Did you and Pete ever have discussions about what to do if one of you passed — what the band should do?

Diggle: Before Pete died, he was thinking of retiring and said to me, “Carry on.” It’s kind of strange that he said that a few times and I never really thought that day would come, and here we are.

Overall, over the years, I don’t know the exact percentages but would the breakdown roughly be that Pete wrote ¾ of them and you ¼?

I would say it was about a third of the songs through the third album era if you count the songs we wrote together, such as “Fast Cars,” “Promises,” “Why Can’t I Touch It” etc., which were usually my songs and Pete added to them. On the last four albums, we wrote about 50% each as you can hear on the new Cherry Red Records box set, Buzzcocks Will Sell You Everything 1991-2014.

Cheeky title!  How do you look back on that era?

Sell You Everything takes its title from one of my songs. The song was more about how much do you sell your soul for or everyone has a price. But now it has been used for this great box set and works well in a playful way. I think — and I know — many Buzzcocks fans see these later albums as under-rated and I think that, too. But also, the fact that they are coming out in this box set will highlight what amazing albums they were. Also, there is an album of demos, songs that we left on tape at various studios. There are some great never-been-heard unreleased tracks on the demo album. The sleeve has been designed so it looks like a bad bootleg cover from back in the day. It’s a fantastic document that captures the later years of the Buzzcocks, a must for any fan.

How do you approach singing Pete’s songs? Do you change your vocal style in attempt to get closer to his voice or stay with what you’ve got?

Singing some of Pete’s songs is not a problem as I have a vocal range to deal with that. When we were together, I tended to sing in a more “rocking” style to give more contrast between us and we complemented each other, or to counter-act his “quiet singing’ as I called it. Now, I sing in a higher range on some songs. I haven’t got that same high-pitched distinction, but I can go in those ranges and it’s not that same tone, with all the Pete-ness of it, but I can get up there and it is important to make them my own. And we’ve got the similar Manc accents. I’ve found I do a good version of “I Don’t Mind,” things like that. That surprised me really ‘cause that’s really up there. Certain things work, the more universal songs. And I have written over 55 songs for Buzzcocks, so I’ve got many of my own to play.

As people, me and Pete spent so much time together. We shared so many amazing things on the journey and we had lots of fun. A lot of drinks. And we learned from each other. Like any relationship, it had its ups and downs, but we did well get through all those years.

Where does your ongoing solo career fit into the new Buzzcocks framework?

I have been doing a few “in conversation” shows, which have been interesting. Answering questions from the audience about the band and doing some acoustic songs. I have done four solo albums that are a different style than Buzzcocks so I would like to write Buzzcocks and solo albums.

I like the first Buzzcocks relaunch, “Gotta Get Better”/ “Destination Zero.” Anything else on the horizon?

We recorded “Gotta Get Better” and “Destination Zero” as I wanted a new record out when we started the British tour to make it all relevant with new material. I am currently writing songs for a new Buzzcocks album. We have a great back catalog, but I think it is important and interesting to continue making new albums and new sounds.

So, with your British tour: Were the fans coming out?

Oh yeah, we did eight shows before Christmas, the first real shows and people actually loved it. Obviously, we missed Pete — it’s a big change — but people have come and we’ve delivered the goods. To be honest, I’ve been blown away. We come out to the music of “Rocky 2,” which is me throwing the gauntlet down, making a comeback, and that kind of sets the tone. The band has been really hot.