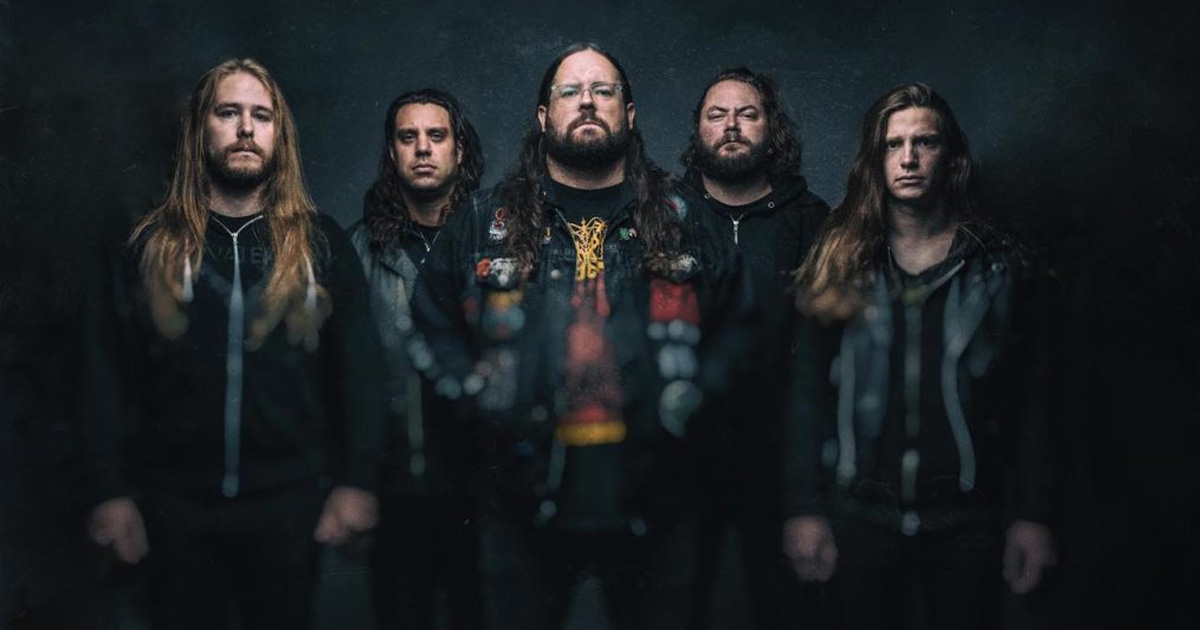 Trevor of The Black Dahlia Murder on Hardcore, Punk and Indecision’s Influence on the New LP

Besides being a vocalist for one of the longest-running heavy metal bands currently, Trevor Strnad is nothing less than a music connoisseur. His The Obituarist column at Metal Injection reveals him as a true fan of his genre but also a man of varied taste, one with a much broader palette that refuses to be shackled to strictly heavy music.

Strnad is celebrating the release of Verminous out TODAY (4/17) on Metal Blade Records. The release is the band’s 9th LP in a storied 19 year career, and comes at the most bizarre time for a record to be released in modern history (during the COVID-19 Epidemic). Regardless of the timing, it’s jaw-clenching brutality that tips its hat to black metal, thrash and death metal, all while keeping close watch on melody. It’s an eclectic effort in approach, but one that still fits nicely in the TBDM oeuvre.

Considering Strnad’s wide taste for heavy music, we cornered the vocalist to ask him about punk and hardcore, his upbringing around the genre in Detroit, modern and classic LPs that mean a lot to him and just how Indecision influenced the new LP Verminous (order yours). The results of our conversation are below. Answers have been edited for clarity and length.

What was your path towards hardcore and punk?

I began my journey as a young metalhead. I was lead into hardcore/punk from two of my friends in school, Ryan Dunn and AJ Polerecky. Well, more like their older siblings, honestly! In 7th grade I would bring blank cassettes over to their houses and sneak CDs out of their older siblings’ rooms while they were gone and we would tape them. My very first punk tapes were Ramones All The Stuff And More VOL 1 and Sex Pistols Nevermind the Bollocks. Shortly after it was Black Flag’s Live 84 album and the first Misfits collection. A great place to start if you ask me! Those were all scores from Ryan’s big sister, who we idolized.

My first year in high school was a major time of musical discovery. Punk, Hardcore, Metal, Nu Metal, Death Metal… it was all I cared about. In 9th grade, which was the ’95-’96 school year, I played in a really terrible band called Cesspool America with Ryan and another friend on drums. We played a kind of indescribable ‘local’ band sound that was just a mix of whatever we could come up with. Punk, Metal, even the beginnings of the Nu-Metal sound were hastily frankensteined together in a Molotov cocktail of naivety. I recall a song where I stole a Biohazard riff from a song off Urban Discipline. The drummer eventually moved away to Iowa and the band dissolved shortly thereafter. We never played a show or made any official recordings. We were out of tune and awful, but it was fun to create.

I heard so many great bands for the first time that school year. I remember hating the Dead Kennedys at first, but Ryan kept beating me over the head with them until one day it finally clicked. I remember listening to a tape of Fresh Fruit For Rotting Vegetables while I took my 9th-grade finals. I also arrived at a lot of great punk via Slayer’s punk cover album Undisputed Attitude. Minor Threat, D.I., T.S.O.L., it was a very exciting time.

As the 10th grade school year began, it would only be a matter of time before Ryan would switch from bass to drums and we would form a proper three-piece punk band by the name of Transgressor. As much as we would’ve loved to be in a metal band, we didn’t have the chops nor the patience to properly learn our instruments at the time. We wanted to get started right away. We wanted to apply all of the DIY ethics we were learning from Black Flag and Dischord records and make demos with cool collaged artwork and play shitty house shows. We defaulted to a three-chord punk sound because it was actually doable for us.

I was definitely attracted to the more metallic sounds that were coming out then. The early Victory Records roster (Integrity, Snapcase, Bloodlet, Deadguy) and Morning Again, whose Hand of Hope compilation completely tore my head off. The first two seven inches that I ever bought were Despair As We Bleed and Hatebreed Under the Knife, which I chose blindly from a local skate shop based on their cool names and cover art. My love for Death Metal had all but fizzled out by the end of the ’90s as it began to stagnate a bit in terms of quality, and I was increasingly attracted to the DIY approach of the hardcore scene. Hardcore bands were touring and available to see live. Death Metal bands on the other hand, at least as far as I was aware of at this time, didn’t have that same level of tangibility in nowheresville Michigan. I traded in a big chunk of my Death Metal library to get albums from bands like Boysetsfire, Torn Apart, and Kiss It Goodbye.

The metalcore scene was really popping off at this time. I was in love with early Cave In, Converge, Botch, Ire, Sons of Abraham, Acme, Fall Silent, Shai Hulud, Premonitions of War, Coalesce, Thoughts of Ionesco, too many to name. I also began to dive into the youth crew style pretty heavily around this time. Bold, Gorillia Biscuits, Youth of Today, Turning Point… I like the high energy and positive vibes it exuded. I didn’t claim straight edge but I was attracted to the drug-free aspects of a lot of hardcore. I wouldn’t drink until I was 22 years old. I remember attending Michigan Fest 98 to see Morning Again live and that being the first time I really got a scope for how huge the hardcore movement was. People traveled from all over the place to be there. It was an endless sea of distro tables and cool homemade zines. I was blown away and would attend the fest for the next few years with all the money I could save and an empty backpack to fill with hardcore CDs. It was like Christmas.

Just after graduating high school I formed a metalcore band in which I played guitar called Blinded By A Book of Fiction. This was like late 1999. We were influenced by Disembodied, Chokehold, Morning Again, and Torn Apart. The band name was actually a Torn Apart lyric. Although we had a hell of a screamer at the helm, I did cut my teeth on the metal style of lyric writing and patterns that I would eventually apply to a young The Black Dahlia Murder.

In discussions with you about hardcore music, not only have you expressed your love for bands rooted in NYHC, but also Japanese, Finnish bands, D-beat, and more. What style do you gravitate towards the most? What bands? Why?

I have begun to look a bit more internationally at ’80s hardcore in the last ten years or so. Lately, I have been really drawn to D-beat. For a while I was on a mission to find every band that sounded exactly like Discharge. Early Disfear, Anti Cimex, Meanwhile, Disaster, Discard, Disgust, Crude SS, Valvontakomissio, Recharge, Dissober, Fleshrevels… all great stuff. I love how raw and basic yet gut level it all is. I also fell in love with the Burning Spirits scene out of Japan… I was lead in by the metallic edge of Death Side’s Bet On the Possibility, which I heard at a punk rock bar while on tour in Japan. Nightmare, Bastard, Kuro, Judgement, Forward, Paintbox… I like the metal aspects woven in and the high energy feel of it. I also like some of the newer metal-infused bands popping up in the US like Knocked Loose, Vein, Candy, Drain, and Gulch. All different sounds but they still have that metal thread that ties them together. I admittedly am not as up on the state of hardcore as I once was. Being in TBDM really rekindled my love for death metal and black metal, which I am still obsessed with til this day.

Yes, I definitely quote a passage of lyrics from Indecision’s “Purgatory” in the second song on our new album. I hope that they won’t be bummed on it and see it as the loving tribute that it is if they ever get wind of it. While our song is based in fantasy and depicts a post-apocalyptic world ridden by zombies, the lines “No Heaven, no Hell, no here, no now” just seemed to perfectly encompass the vibe of a world gone completely mad. I’ve always loved Indecision… I saw them at one of the Michigan fests I mentioned earlier. I am particularly fond of the era with Artie Phillie on vocals.

Considering your touring and recording schedules, you go to quite a lot of live shows still. What were some hardcore/punk bands that you’ve seen that have impressed and why?

Flag were really cool! I got a bit teary eyed when I saw them. So much nostalgia hearing those Black Flag songs come to life! Cerebral Ballzy blew me away. It was like the second coming of Bad Brains and Death (Detroit)! I hadn’t heard them prior and they definitely stole the show that night. Fucked Up was very cool live. There was an intense family aspect to the crowd and a real unbridled joy coming from them. Vein, Candy, Bane, Catharsis, Botch, Ink & Dagger, American Nightmare, Converge, Buried Alive, Terror, Reversal of Man, Ascension, Fall Silent, Madball all put on inspiring shows. It’s the passion and freedom they exude. This is raw, unfiltered art filled with purpose and I wouldn’t have it any other way.

What are your essential hardcore records and how do they relate to your work with BDM?

I could go on and on. They all inspire me to be intense with my art. To take it seriously and put my heart and passion into what I do musically. I’m not just making a product to sell to someone but rather an impassioned and honest piece of art that I actually care about and can be proud of.

When TBDM first started, we cut our teeth playing hardcore/metalcore shows exclusively. We began as a metalcore band that worshipped Undying and Prayer For Cleansing. Even though the music we were playing was more technically demanding than bands like Bane or Throwdown who we were playing alongside locally, we felt challenged to match their intense stage presence and to break down the fourth wall by mic-ing people up who were singing along and encouraging stage dives and the like. These bands weren’t just standing there staring at their instruments like a lot of metal bands I had seen… they were leaving it all on the stage and just oozing passion from every pore. We still carry this hardcore element with us in our stage presence to this day, and I think we thrive the most in a small club environment.

The Black Dahlia Murder’s Verminous is out NOW via Metal Blade Records. Get yours.