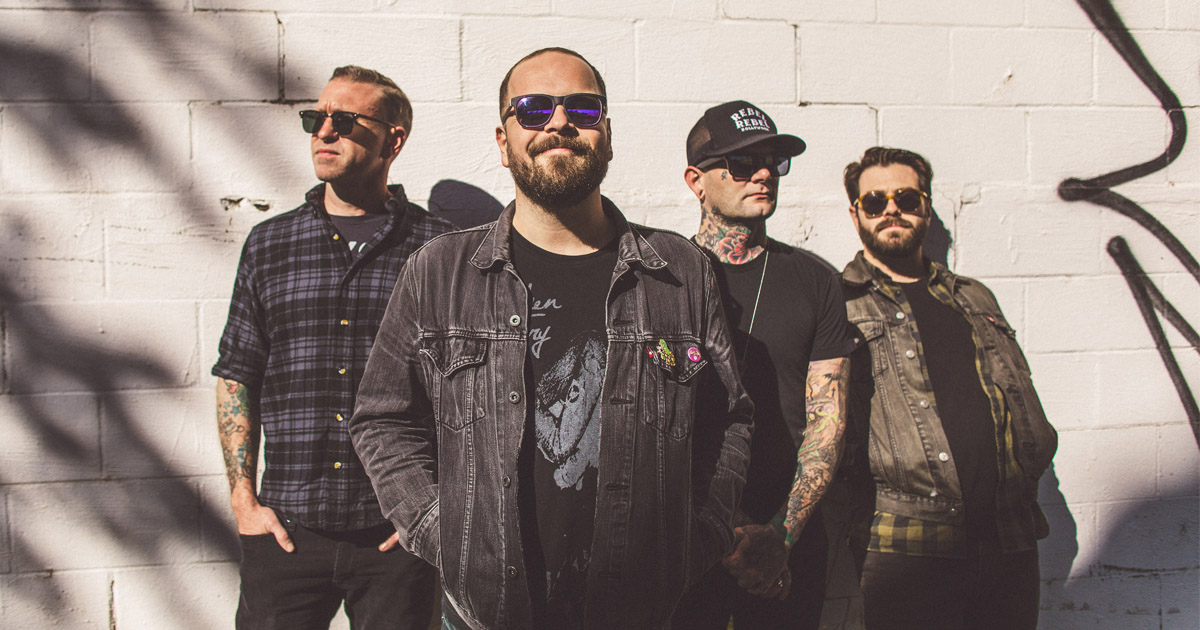 Ryan of Red City Radio on Psychedelics, Gardening, and Supporting Friends During Quarantine

Like everyone else, Red City Radio’s world has been turned upside-down by Coronavirus. Their American and European tour dates were cancelled as the future of live music quickly became uncertain. Never ones to despair, the band immediately began helping others impacted by the virus. They raffled off some sweet custom jackets to raise funds to buy PPE for essential workers on the front lines and created a new shirt design to support the brewers of their official beer, the If You Want Blood Orange IPA. I spoke on the phone with guitarist Ryan Donovan (pictured far right above) about their efforts to support their friends at Ratio Beerworks, his transition from Nothington bass player to Red City Radio, and gardening.

Hard Noise: How are you holding up in quarantine?

Ryan Donovan: I’m pretty good. Most of my work is from home anyways, so not a whole has terribly changed other than the restrictions to be able to get out and do stuff. It’s just wild times. You just gotta stick to the safety and ride this out till the world is safe to get back out into.

HN: How did this shirt collaboration come about?

RD: They’re good friends of ours, we love them dearly. They’ve been huge fans and supporters of our band as we have them of their fine establishment. Over the years, we got to [have] a pretty close relationship with them, they reached out to see if we wanted to do an acoustic performance on their channel. And I was like, “Yeah that’s cool, but that’s not really gonna help out the company and the staff, why don’t we do something that can generate some revenue for you guys.” It’s financially hard for any small business in this time. So I figured a t-shirt is something we can ship through all 50 states, we’ve got a pretty decent fanbase. We just wanted to do something to help put money in their pockets.

New one for the good pals over @redcityradio , super limited design, all proceeds will go towards helping @ratiobeerworks staff. Also, did this with a lot of help from the always good @truegrittexturesupply Stipple Studio Package. 🔥 ⠀⠀ #repost @redcityradio ・・・ Much love to our @ratiobeerworks family out in Denver, CO. Our “If You Want Blood” blood orange IPA beer collab now has a shirt! Proceeds from this limited design will go towards helping their staff. Huge thank you to @estudiomiopia for donating this incredible design! • Head over to @ratiobeerworks and click the link in their bio 🍺 🍊🐯 • From @ratiobeerworks : When life gives you blood oranges, you make blood orange IPA. We are honored that our long time friends, Red City Radio approached us to co-release this shirt to support us during these wild times. This will be a prelude to our If You Want Blood – Blood Orange IPA releasing in 6-packs on Friday 4/24! • Ratio has always been supporters of independent artists and musicians since we slung our first beer, and we are so honored to be supported by that same community and continue to let the beer unite and boost all of us up. ___ #redcityradio #rcr #ratio #ratiobeerworks #ifyouwantblood #ifyouwantbloodorangeipa #limited #merch #denver #colorado #skytigers #longliverockandroll #coronavirussupport ⠀⠀

RD: It tastes like blood orange. It really is tasty beer. It pours out red/orange, it’s an IPA base brewed with coriander, orange peel, and a shit ton of blood oranges. Then it’s dry-hopped with citra and El Dorado hops. It seems to be a local favorite. Dallas [Tidwell, drummer of Red City Radio] got a couple kegs of it for his wedding. Everyone’s got a beer, and I was thinking of a way to make ours stand out. Blood orange is a really tasty flavor profile, and the orange [matches] the tigers. It just worked.

HN: Red City Radio has cultivated a distinct aesthetic over the past two or so years with lots of tigers and psychedelic art. How did that come into being?

RD: This artist down in Brazil, Gustavo Magalhães (@estudiomiopia), did a flyer for one of the shows we did last year with Hot Water Music. That Skytigers design just kind unassumingly took off on its own branding and everyone just fell in love with it. Before we knew it, there were tattoos of it everywhere. It was “Yeah ok, cool. This Skytiger is now a part of our thing, a part of our branding.” We’re pretty open about enjoying our fun. Doing psychedelics, smoking some weed, having some tasty cocktails, that kind of thing. We just kind of rolled with it.

Stoked to announce this design for one of my favorite bands EVER! Thanks @redcityradio for this stoned wizard out there! ⠀⠀ 🧙‍♂️ 🐴 🔥 ⠀⠀

HN: I read that Skytigers is kind of your PMA mantra, could you elaborate on that mindset?

RD: Yeah something like that. [Laughs] A buddy of mine, Ryan, plays in a band called Hot Knife. We were on a trip in Cabo, Mexico. We did some acid, we were tripping, it’s just kind of like this attitude of letting yourself go, letting your flag fly and embracing what you love. I think a lot of people fight with themselves in fear of public perception of good or bad. Obviously everyone has different circles and walks of life, from the friends we hang out with to our families that we share Thanksgiving dinner with, but ultimately, whatever your vice is, as long as you’re controlled within it, why not enjoy it? Not be shy about or afraid to embrace that. But also it’s rooted in just being a kind person, being courteous to people even if you are being wild.  You can cut loose and still be respectful of the environment you’re around in your good times.

HN: Does that help you as a musician?

RD: Yeah, it’s pretty rock and roll. It’s subjective, but Red City Radio as four collective dudes and our front of house we’re super rock and roll, but we’re not gonna trash the hotel room rock and roll. But there are those assholes out there. [They think] this is what it’s all about, I’m gonna chug this beer, smash it backstage, and go out and rip a guitar solo. As rock and roll as that is, it’s also kind of an asshole move. We like to keep a fun balance, you know?

HN: You were the bassist in Nothington before becoming a guitarist in Red City Radio, what was that transition like musically?

RD: Well, it was equally really exciting and fun as it was anxious and stressful. I played bass my whole life, and we play punk rock so I’m just a mediocre musician at best. Although now playing guitar in Red City Radio I’ve become a much better guitar player. But it was a trip. Garret [Dale, lead singer of Red City Radio] called me when Paul [Pendley, former vocalist/guitarist of Red City Radio] left the band, and was like, “Paul’s leaving the band, do you wanna be in our band?” And I was like, “Yeah dude of course. I gotta let you know, I’ve never actually played guitar live in a band setting, ever.”

It was an interesting transition to now have to articulate all six strings. When I was trying to learn the songs, I was having a really hard time finding all of them, and I was getting stressed out, like did I just get in way over my head? These songs are hard to figure out. And I hit up Garret  and he told me the tuning was a complete abstraction of drop C but also the bottom 3 strings are also all dropped as well to F# G# C#. And I was like, “Thank God, now I’m not totally incompetent. It’s been a lot of fun, it’s definitely stepped up my game as a musician.

HD: You also serve as the band’s booking agent. Has your experience as a musician helped in that role?

RD: Being in a band has helped that. Ever since I was touring with Nothington, just meeting all the promoters in each city, really establishing those contacts, being a part of the community that is our DIY kind of roots. It’s helped me understand how artists can and should be valued, while also working with promoters because they’re working on their end to make sure your show is good when you come to their city. So they have to make money too, but you have to find a good balance and make sure the art is paid fairly and rewarded for the ticket sales. And everybody wins. The fans have a great show, we get to perform in a cool club, the band gets paid, then wake up the next morning and onto the next one.

HN: Does that level of control help?

RD: I think it really helps. There’s advantages to being on way bigger agencies, that probably helps with more festival plugs and maybe the next top-tiered level of tours. But you also run the risk of being a small fish in their big pond to where they’re not really going to care to negotiate for your top dollar, they’re just going to think, “Ok cool, we’ve got this little mark on the calendar. Couple hundred bucks, onto the next one, let’s book our bigger bands and really hustle and negotiate those deals.” It is nice to be that hands-on in this project, it gives us the best chance to win.

HN: What can you tell me about the new LP?

I can tell you it’s gonna be really fucking cool and that Garret Dale is a really fucking cool songwriter. It’s gonna be great. It’s done, there’s just a few little bells and whistles to put on it. We worked with Mike Kennerty from All-American Rejects again, he worked on our Skytigers EP and our last two singles we dropped, “Love a Liar” and “Young, Beautiful & Broke.” He’s a sweetheart and phenomenal at what he does. I can’t really say too much other than that other than we love it. It’s a rock and roll record. We did have the gumption of putting it out this year but now with this crisis and pandemic, everything is put on hold. Who knows? Hopefully 2021. We’re kind of in limbo right now. We’re just focused on getting through the mixing process. Hopefully if everything is back to normal come October and the Fest out in Gainesville goes down, maybe you’ll hear a new tune from the record, wink wink.

HN: What kind of non-musical art are you into right now?

RD: I do a lot of graphic design and marketing. More particular on branding. I help small businesses here in San Diego. One of them is a skateboard company a few blocks down from where I live, Sanford Shapes. Those are all handcrafted skateboards. I’ve been woodworking since I was out of high school. The Sanford family, I think of them as my family, I love them dearly. It’s a fun medium as well. I don’t know if it’s considered art or not but I really am trying to develop my green thumb. Got a little garden. Strawberries, zucchini, lettuce, carrots, and waiting on some watermelons, but we’ll see.