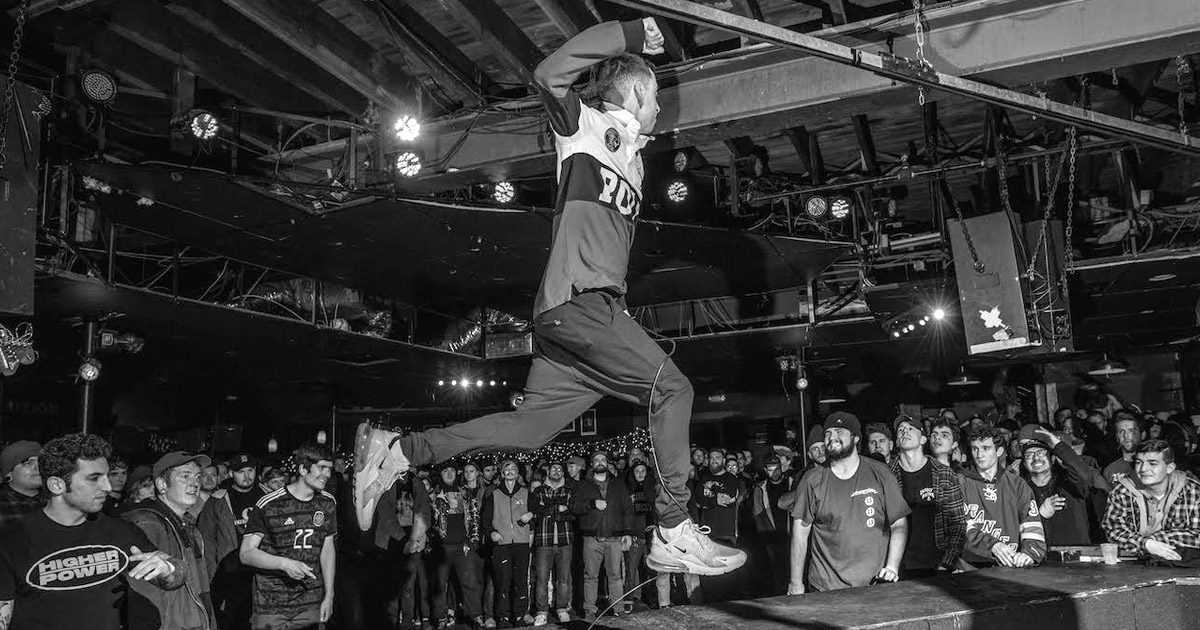 Mindforce on the New EP, Keeping the Gig Wild and the Magic of Ghostface

Hailing from the Hudson Valley in NY, Mindforce grew from the ashes of Living Laser after that band’s dissolution in 2016. Combining elements of crossover thrash with a strong sense of groove, the band became favorites very quickly off of the strength of their live appearances and the releases of their demo, The Future Of EP and a split with Dead Heat. All of the buzz came to a boil with the release of their Triple B debut LP Excalibur, which hit in late 2018. Though released late in November, it was hailed as one of the best of that year.

Riding high off of the buzz of Excalibur, Mindforce were ready to conquer the world when tragedy struck — guitarist Mike Shaw was involved in a head-on collision.  The HVHC crew went on pause as they banded together for Shaw, and the entirety of the hardcore scene joined in solidarity, helping push a GoFundMe built in his honor to monolithic heights. The band returned to action later that year, including a triumphant appearance at Sound & Fury.

On February 19th, Mindforce returned with a new EP for Triple B called Swingin Swords, Choppin Lords which sold quickly into another pressing. With that in mind, we figured a check in with vocalist Jay Peta of one of the most energetic and groovy hardcore bands around was in order. The results of our conversation are below.

Hard Noise: Let’s start with the accident a little more than a year ago. Can you take us through some of your personal thoughts and feelings when you heard the news? And your thoughts regarding the way the community banded together with Mike’s GoFundMe campaign?

Jay Peta: When I heard the news I was just so grateful Mike was alive and going to be OK… As far as what the hardcore scene did for Mike, it left me speechless with pride and gratitude. Our culture is truly something special. I’ll never be able to repay the scene for the help it gave my best friend. Shout out to Streets of Hate and the bands that played the benefit.

What are your personal thoughts with regard to Excalibur and its overall wildly positive reception?

I loved that people were into Excalibur. It made the live shows even wilder and that’s what we’re about — everybody going off at shows.

Swingin Swords, Choppin Lords is your latest EP, and it flew off the shelves shortly after release. Are these songs new? Have they been simmering for a bit? Will any appear on a forthcoming LP in another form?

Yea, these are new songs we wrote for the EP… I think we started writing them in the Fall maybe? We recorded in the winter. They haven’t really been simmering. Before we wrote these, we wrote a couple other songs for a live set on Axe To Grind Podcast but only kept one. I never like re-recording songs so we probably won’t rerecord them.

The title track’s main riff is very reminiscent of the Ozzy Osbourne classic “Bark at the Moon.” Was that an inspiration? How much does classic heavy metal factor into your music and were there any other direct influences that showed up on the EP?

It was definitely an influence, but how we got to that influence was indirectly because of NYHC crossover. There is so much heavy metal influence on early NYHC crossover that goes unnoticed under the thrash influences. For example, the song “Shadow Out Of Time” by The Icemen is filled Ozzy riffs, but with a hard ass NYHC delivery. We wanted to recreate those moments that we love from our favorite crossover where hardcore, thrash, and heavy metal all fuse.

If forced to pick a favorite on the new EP, what would it be and why?

Right now I like the title track but I don’t know man, it’s always changing. I’ll prob have one after we start playing them live.

We’re all in a state of flux regarding live gigs, so that said, what is your favorite gig that you’ve ever attended? What made it special?

Damn that’s a hard ass question! Off the top of my head, Ghostface at The Chance in Poughkeepsie in like 2010 was a banger. My dude Tony came out in all purple and opened up with Nutmeg. The lyric “big microphone hippie, hit Poughkeepsie crispy chicken” made the place explode, wild shit, I thought someone was going to bust a shot in the air.

Another one of my all time favorites was Quicksand at The Music Hall of Williamsburg in Brooklyn in 2012. Quicksand is one of my favorite bands and they had just come back, and I lost my mind when they started. Place went nuts. I remember stage diving non stop, even moshed my contacts out somehow. Got lost trying to drive home blind and had to have my wife come get me in the middle of the night hahaha … love you Tiff!

Are there any plans for a new LP? When?