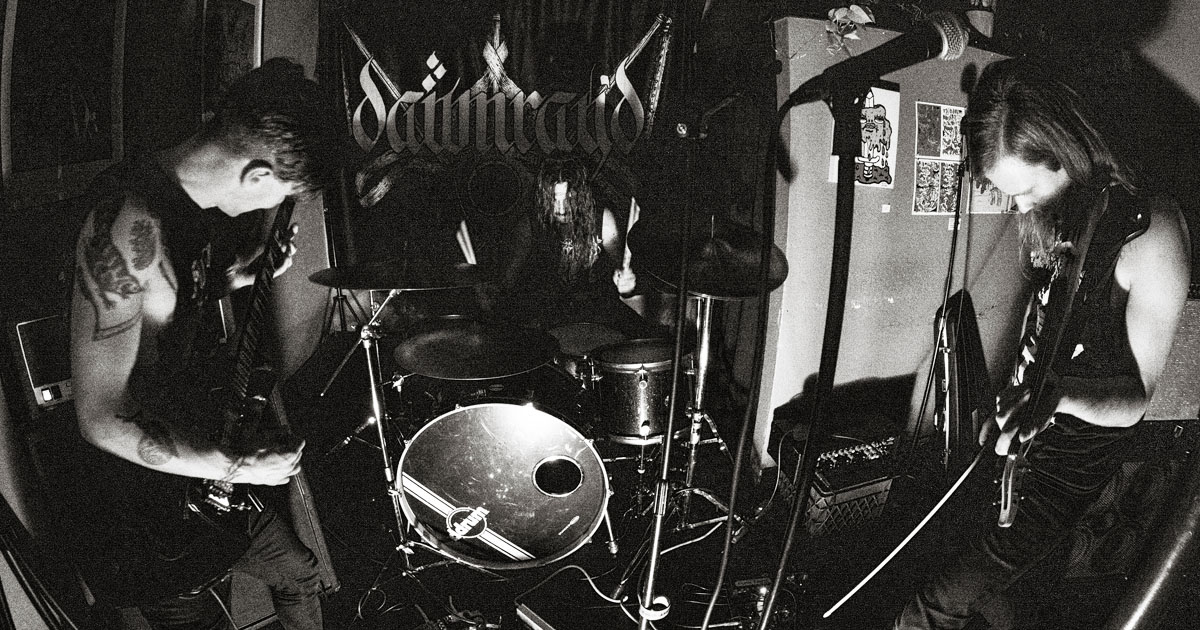 The Burning Rage of a Dying Planet: An Interview With Dawn Ray’d

Sometimes, our rage is justified.

As the British black metal three-piece Dawn Ray’d played dates across Oregon in January, a mass extinction event was taking place across Australia. Unprecedented bushfires consumed thousands of acres of the Outback, with high estimates of a billion animals dying in an extremely fragile ecosystem. This was just the latest beat in an endless, anger-inducing-news-cycle, one that Dawn Ray’d spun into the tactile fabric of their album Behold Sedition Plainsong, which was released in October, before most people had heard of Covid-19. In the last few months, the image of the apocalyptic catastrophe in which we currently live was transposed from the crisis in the outback to the global pandemic.

“[T]his is a very angry record, and often quite a hateful record, but in a very measured and calculated way,” says Simon Barr, lead singer and violinist for Dawn Ray’d. “I never wanted this to be a single issue band, like just a vegan band, or just an antifascist band, because that’s not what our politics are, and intersectionality is going to be more and more important as climate chaos starts to speed up around us in the coming years.”

Since 2017, Dawn Ray’d has defined itself not just through intensive commitment to anarchist politics, but also by what it’s not. Black metal has been singed by its associations with the far-right, tracing back to the earliest Norwegian incarnations that flirted with and often fetishized violent totalitarianism and folk-ish nationalism. Since then, neo-Nazi bands like Burzum have been lionized as a part of the genre’s founding mythos, as though its iconoclastic nature makes it even more valid. Over the past few years, an explicitly fascist current of bands has emerged, often tied to fascist street movements in Europe, and even those artists who aren’t connected to far-right politics have made themselves a public enemy of what they see as the “politically correct” currents of the left.

Dawn Ray’d comes from a different camp. Their rage draws from a wholly different tradition, one that is equally discontented with the world, but in solidarity with the masses.

“I think the cracks in capitalism are more obvious than maybe they were previously, but none of these problems are new, and we have been on this path for a long time. Every 10 years or so there is a crisis of capitalism,” says Barr. “Governments are very skilled at alleviating these problems with colonialism, foreign wars and recklessly exploiting the earth’s resources, but I guess we are fairly close to the inevitable end of this system. There have always been bands, artists and writers that try and signal boost current struggles. I hope that we are now part of that lineage.”

Inspired by the syncretic anarchist philosophy of Voltairine de Cleyre, the band is fighting for a world given back to the people and their communities, where the oppressed have a voice and the rich have been pushed away from society’s driver’s seat. To do this, Dawn Ray’d has connected with a growing network of left-wing and antifascist “extreme” metal bands and empowered organizations to come to shows, sell zines and political materials, and to use their stage to offer a radical vision for how to deal with the crisis of 2020.

“This band is anarchist before it is anything else. We don’t believe we can solve any one of these problems without first destroying capitalism. We are also going to have to break this down into smaller fights, though. We have jobs that are urgent, like helping people across borders or stopping fascism. Then we have the more long term struggles like ending environmental destruction and overthrowing capitalism,” says Barr.

Though it can be disorienting to think about this in the context of the current pandemic, Behold Sedition Plainsong was an album created in crisis. The band comes from an England that was already embroiled in political scandals inspired by Brexit and the rising xenophobia of the Tories, a situation that mirrors the Trump movement in the U.S. and national populist parties across Europe. The band’s short life — two albums and an EP since 2017 — exists at a turning point for global politics, where a new Gilded Age is wreaking havoc on the planet and people are desperately scrambling for a response. This makes Behold Sedition Plainsong not just a cathartic release of anger, but a clarion call for how to survive crisis and come together.

“My big concern for the coming years is eco-fascism. As soon as the ruling class start to admit climate chaos is happening and start hoarding resources, we are going to have to make sure we don’t let them use fascism to implement that. So yeah, we have a couple of songs that talk about the intersect between anti-fascism and anti-nationalism and also environmental politics on this record,” says Simon Barr.

The band uses their voice to offer a new way, an egalitarian proposal for social relationships where communities take on challenges themselves without the aid of corporations, militaries, and rich investors.

This vision of possibilities, born from the band’s deeply-laid anarchist ideals, is always present as they hand out political introductions at their merch tables and proclaim their politics clearly from the stage. Metal does not have a prideful tradition of political radicalism (that’s saved for the crust punks), but Dawn Ray’d’s success has been in intentionally building that space anyway.

And the politics isn’t just a backdrop. As they’ve included political projects, messaging, and fundraising into their shows, the band hopes this can be a transition point into doing the work on the ground. While sheltering in place, they are using their merch money to support unhoused communities in Liverpool and Leeds to meet their basic needs in the midst of the health crisis.

“Every scene is just a microcosm of society, and a good community to try and work within. If people talk about anti-racism and anti-transphobia within this scene, it definitely makes it easier for marginalized people to feel safe and valid at shows, which is itself a victory I think,” says Barr, who was first introduced to anarchism in a flyer at a show and wants to replicate this for future attendees.

With Behold Sedition Plainsong, their music took another step forward. Guitarist Fabian Devlin worked out the structure and riffs of the 11-tracks with Simon writing the lyrics separately, then bringing them all together with drummer Matthew Broadley in punishing rehearsal sessions until it felt right. Simon began training as a violinist as a kid, and the working class and leftist roots of folk music (literally, “music of the people”) has further helped Dawn Ray’d stand out.

Anarchism has always contained a mix of the future and the anti-modern, the past and the present as people try to uncover folk traditions that run in the face of empire and re-integrate them into a new way of living. Behold Sedition Plainsong, just as with their first full-length album The Unlawful Assembly, carries these reminders of the past. And the world right now is already very different from when the album was written; the crisis has only expanded, overtaking every community.

“My outlook has definitely changed in general. Seeing a global disaster like this come to your door, (even right inside house) is certainly sobering, and feels like it is a warning of what the future could be,” says Barr, whose concern about nationalism and border imperialism has only escalated in the short few months since the album was released. “With the acceleration of climate catastrophe, we see an increase of the chances of more and more disasters on a global scale.”

There is a vitriolic poetry to these songs, founded in the identification of power and the naming of enemies. “A mistrusting hatred centuries earned / The knowledge of the flung projectile / The cleansing power of the burning street / The loathing of the ruling hand,” growls Barr on “The Smell of Ancient Dust.” This is class rage, crystallized and thrown back at the audience, not out of lamentation, but out of shared struggle.

As wages fall, and smoke fills the air, we have a common experience in seeing the control over our lives slip away, and that can be the trigger point for fighting back. This has never been more true than in the midst of the Coronavirus, as mutual aid projects and hundreds of strikes spread across the world, challenging narratives about isolation and selfishness.

“I am optimistic. Capitalism is going to end no matter what, that is a given. It’s what we do as that happens that will be crucial, I think. Whether the revolution will happen in my lifetime or not I don’t know, but as anarchists we are needed to help people escape across borders, to defend the land, to physically confront fascist movements, to house refugees and the houseless and to constantly fight and confront the state whenever we can,” says Barr, adding that, amidst the biting anger, there is a lot of hope in the record. “There has never been a more poignant or profound time to be an anarchist! Whether we win or not, we have no choice but to fight tooth and nail for ourselves and our class!”

Dawn Ray’d had been touring endlessly, only taking a short break to record, before the performance industry was shuttered to a halt. Now they are writing the next album, yet have to wait until they can safely enter the same room together before those tracks fully come together.  In just a matter of three years, they have completely shattered expectations about what black metal can be, and, along with comrades around the world, they are rebuilding the scene into something more familiar and vital to their community. Which is, in the end, all we have to rely on. No one will do it for us. We have to do it ourselves.