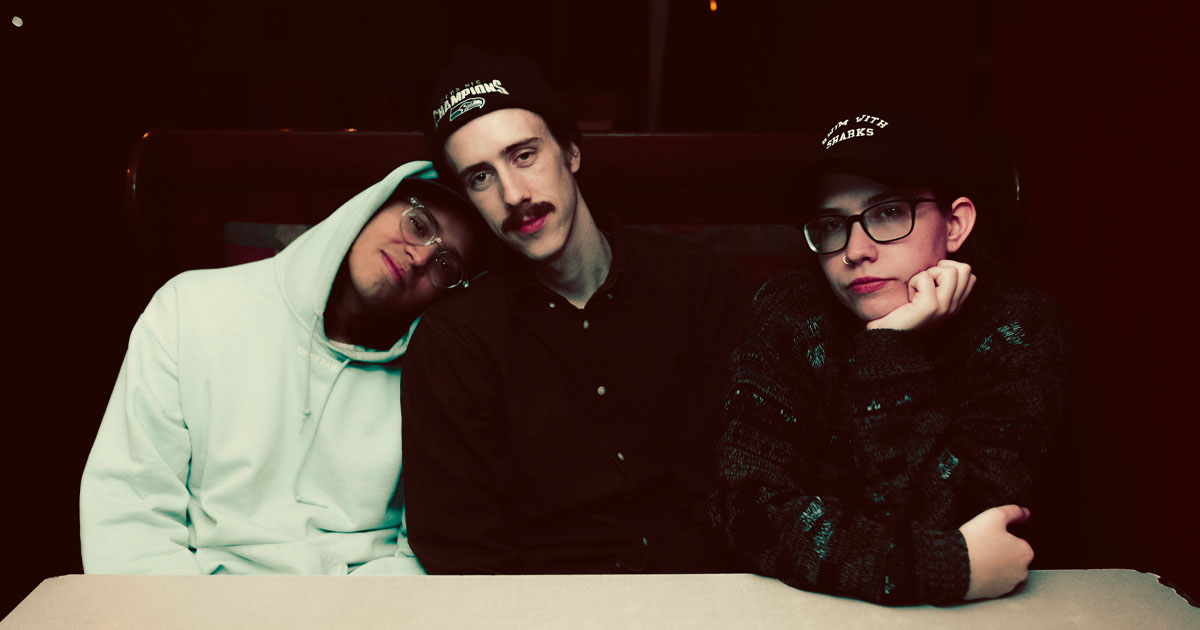 Chicago indie rock trio Retirement Party got started and hit the ground running. Their ability to fuse elements of emo, punk, and math rock, along with each member’s individual mastery, made them one of the most exciting new acts on the scene. After their self-released EP and widely acclaimed debut full-length, Somewhat Literate, they were hit with that dreaded question: What next?  “You finish a big project and feel a little burnt out from all of it,” lead singer Avery Springer explained. “A lot of times I wouldn’t write after that. It feels hard to get ready again.”

That sense of losing passion is, ironically, part of what inspired the group’s sophomore album Runaway Dog, out today on Counter Intuitive Records. Tracks deal with the isolation that comes with a loved one’s passing or a friend’s betrayal of trust, as well as ways that excitement about playing music can fizzle out.

Having recently graduated from Columbia College studying music business while fronting Retirement Party, Springer analyzes her on-again off-again relationship with her art on the record. “There would be times when I wouldn’t pick up the guitar,” said Springer. “I’d be back from tour, I’d be focusing on school. I just played guitar for two months and now I’m gonna read books and go to class for two months. It would get really frustrating, because I would write things that I wasn’t happy with.”

The album had a different development than other Retirement Party releases. “I always present at least half a song, a first verse and a chorus,” Springer explained of their previous process. “Instead of everyone writing their own parts [this] was a little bit more collaborative. It feels more organic between all of us. We were more ready to be critical of the parts each other were writing.”

Guitarist Eddy Rodriguez agreed, saying the process felt more deliberate. The record was demoed out without the lead guitar and later added where it was needed. “We make sure that we’re adding stuff. Not having a lead guitar for the sake of having a lead guitar. I wrote in the studio. It was me playing it, but everyone had a hand in what we thought was cool.”

The increased cohesion is apparent from the start of the album. The title track begins with a steady, almost lazy guitar note that chugs along to establish momentum. Drummer James Ringness’ fills expand the track sonically, giving Springer’s lyrics more room. Against such a simple backdrop, the lyrics about losing creative energy and focus make more of an impact. “My appetite is not what it used to be/moving forward, counting sheep.” Fewer lyrics make this a stronger song. The latter third is all instrumental — emphasizing energetic guitar hooks and powerful drum beats that create a more contemplative feel. It sounds like the band is having a great jam session that reignites their creativity.

Track to track flow is essential to any Retirement Party project. “I don’t like hitting shuffle, Springer admitted. “I find a lot of value in the order of an album and sequencing it that way. That experience definitely matters to me — that’s how I listen to music, that’s how I hope people listen to ours.” Listeners are definitely rewarded for following her advice. The lead-in from the end of ambitious “Runaway Dog” to the start of the spirited, boppy “Compensation” is incredibly satisfying, and every moment like this is intentional.

While on tour, the band played albums like Oso Oso’s Basking in the Glow and Dismemberment Plan’s Emergency and I front to back to help figure out how they wanted to sound. Springer said that muscling through writer’s block is the only way to overcome it, and “Compensation” sounds like the creative reward that only comes after months of ideas that suck, even more so when preceded by a track about being stuck. “You have to get a hundred bad ideas out before you can get one good one,” noted Ringness. The track deals with Springer’s efforts to not compromise her art in the name of business. “Compensation” explores that duality with clever lyricism and rhymes. “Is sacrificing integrity the intention?/It’s up for contention.”

The listener can hear this struggle start to weigh on Springer later in the record on “Afterthought.” The track opens with Springer confessing she’s too tired to sleep and is resigned to certain doom. The guitar here switches gears rapidly between grungy lows and squealing highs, tracking the absurdity of pursuing music as a career amidst impending ecological devastation. These moments make Runaway Dog a compelling meta-commentary on being a musician in 2020.

Runaway Dog is just as powerful when it deals with themes of family and friendship, like on the third track, “Old Age.” Written in response to the deaths of Springer’s grandfather and roommate, moody riffs score Springer’s rumination on grief, building to noisier crashes as everyone’s pain is taken into consideration. “Painstakingly unfair, don’t have to know the day by day of what happens to individuals, well what happens?” The huge, bluesy guitar solo on the track showcases something listeners already knew about Retirement Party while demonstrating how far they’ve come as a band. Yes, they’re excellent musicians capable of crafting intricate tunes, but giving this solo the attention is the result of them learning from and supporting each other’s strengths.

In spite of dealing with difficult emotions and circumstances, Retirement Party remind themselves and the listener that music is key to self-discovery in the closing track, “Wild Boyz.” Springer sings about being confused and unsure, but takes solace in the friends she’s made. The twanging, easygoing acoustic guitar and references to “running off with the wild boys” makes them out to be a wild west posse, giving the friendships described a mythic quality. Towards the end, it slowly descends into experimental noise to show the struggle of enjoying something you loved. Musically and lyrically, it’s everything Runaway Dog represents. The exhaustion of pursuing any creative endeavor is overwhelming, and so is life, but that’s why we have music.