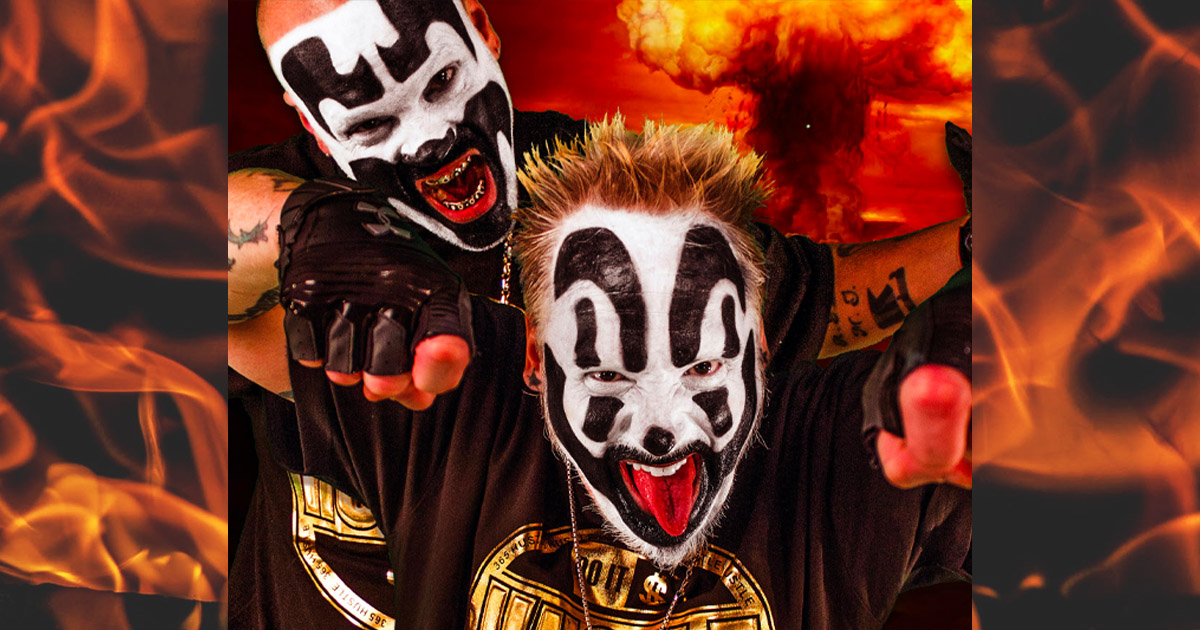 Up the Juggalos: Shaggy 2 Dope on the Left’s Gradual Embrace of ICP

In the last few years under the Trump administration, we’ve gotten used to seeing political and cultural lines redrawn and reinforced, and to watching people defend what was once considered indefensible. The schisms in this country run deep. But we have also been given the rare opportunity to watch the cream rise to the top. We’re seeing allies come from the most surprising places. One of these is a group of white rappers from suburban Detroit. And they happen to paint their faces like a bunch of clowns.

Whether or not they intended to, The Insane Clown Posse, and their massive following of working-class Juggalos, have risen out of the fire as a potent leftist ally. Fronted by rappers Violent J and Shaggy 2 Dope, the horrorcore group has amassed an army of global fanatics. The FBI deemed the Juggalos a gang, and the majority of society simply dismissed the whole movement as absurd. But as the lines in the sand have been drawn deeper in this country, ICP and the Juggalos have gradually entered into mainstream conversation in their own right, beyond mere spectacle or punchline.

The maligned group was pushed to the center of the fray in 2017, when a lawsuit against the FBI for its classification of Juggalos as a gang coalesced into the anti-police brutality Juggalo March On Washington, disrupting a far-right rally. Various Juggalo factions like Struggalo Circus and Lette’s Respect were created to fight racism and encourage feminism, shedding further light on the group’s overall message of unity. Violent J and Shaggy 2 Dope have continued to grow with the times and address the accusations of homophobic content in their earlier work. It’s not unusual to see an Anti-Racist banner with the group’s Hatchet Man logo emblazoned on it, or some leftist shitposter sharing a pro-Juggalo meme. Recently, ICP themselves donated their shirts to be turned into masks for COVID-19 workers. The rest of us are finally opening our eyes to what’s underneath the facepaint.

Due to COVID-19 fears, for the first time in its 20-year history, ICP cancelled their yearly music festival The Gathering Of The Juggalos. The Gathering isn’t simply a three day music fest, but a hallowed event where the fans can unabashedly be themselves and celebrate the community they have built. In a time where conservatives and democrats alike are swapping human lives for capital gains, ICP again showed where their heart is. The cancellation hit hard, but Violent J made it perfectly clear the health and wellbeing of every single Juggalo was the utmost priority.

The 180 turn in public opinion of the Juggalos has been surprising, to say the least. I reached out to Shaggy 2 Dope to see what he thought of all this newfound love, and ICP’s gradual, unexpected emergence as a political group.

Hard Noise: With the group’s stances on political issues and your decision to cancel The Gathering, we’ve seen a lot of respect from people that haven’t been known to support ICP in the past. How do you feel about this newfound love?

Shaggy 2 Dope: I feel it. It’s weird, it’s different. Back in the beginning, in Detroit, it was all love. But after we broke out, motherfuckers don’t just hate on us, they hate us. I don’t know what the fuck we did to anybody to deserve it, but we’re used to it. At this point, we embrace it. We know we’re the most hated band in the world, we’re not stupid.

Our whole career we’ve always done the right thing, but nobody wants to see that. Maybe because there’s something big going on and we’re not wilin’ it’s surprising. But it feels good. If people want to look at us like we’re some sort of hero for not doing the Gathering, I’m all for it. Like me. I’m not out here trying to get hated.

While you touch on some antiracist themes in your music, do you see ICP as a political group?

We’re not a political group, but we’re just not racist motherfuckers. I hear racist shit, but I’m out the loop on that shit. I don’t understand how somebody could be. That shit just doesn’t compute with me. I got a three-year-old daughter and we never pin words on anything. There’s nothing political to that, that’s just how we came up. But I hate racist people. It’s a waste of time and the dumbest shit ever.

As we move forward, where do you see the Juggalo’s place in the big picture?

I’ll tell you, you can take [Insane Clown Posse] out of the picture and ship us off to Antarctica, and Juggalos will still be here. They’re their own thing now. There are entire bands and products that are sold to Juggalos that don’t sound like us, and have nothing to do with us. When we’re dead and gone, that’s going to live on. Hopefully people will carry it on in a proper way and send out the same kind of message we represent now.

What can we expect to see out of ICP coming up?

Man it’s hard to say. We don’t blabber on about what we’re going to do, but we had so much shit planned this year. It’s a bummer, but I’m not going to make it about us. It fucked up everybody’s plans. Everything is pushed back. I’m not at liberty to talk about it, but we got a lot of big shit coming up. So keep your eyes open and hopefully by the end of year. If not, for sure next year.

For like President? That’s never going to happen. I don’t even know what I’d do. I’d probably be assassinated the second someone saw my name on that shit.