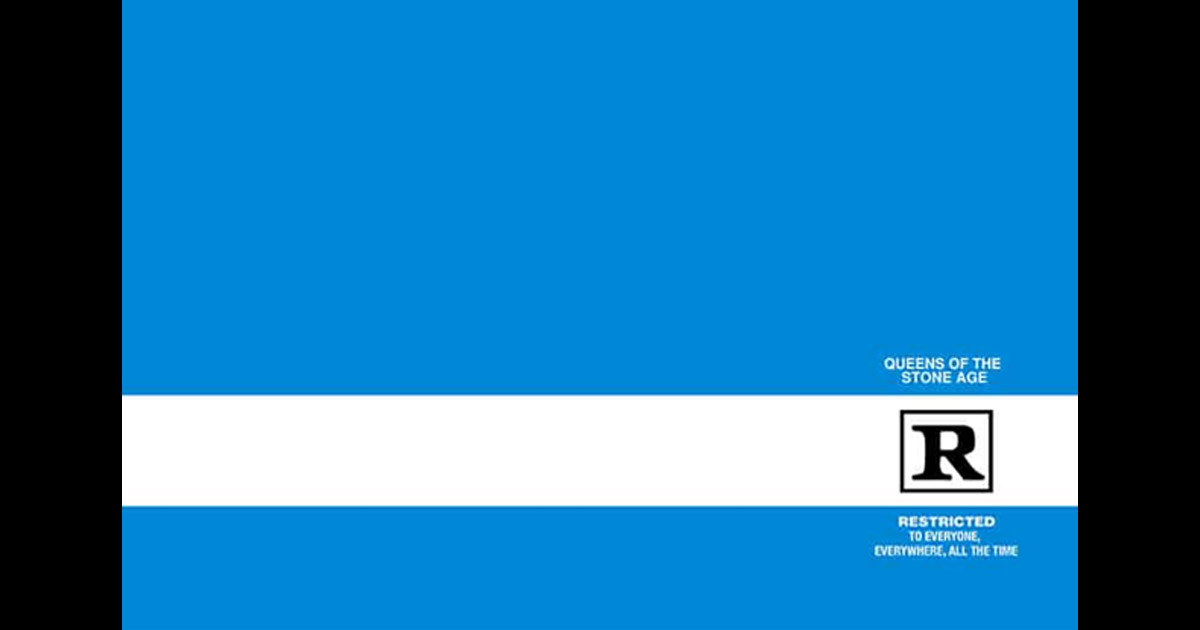 Touching the Weird: Queens of the Stone Age’s ‘Rated R’ at 20

In 2000, Queens of the Stone Age pumped weirdness back into rock music on their second album and major label debut, Rated R.

While the band’s self-titled debut swam comfortably in the sludge alongside Josh Homme’s previous band, Kyuss, Rated R is the sound of the Queens’ frontman indulging in his pop-rock sensibilities. The stranger those sounds were, the better.

“I wanted to wean our audience onto the idea that we were gonna play everything,” Homme said of Rated R in an interview with XFM Radio in October 2007. “We were introducing the strange. I wanted to add a weird quirk. I was interested in bridging the gap between the audience and the weird, like ‘Come touch the weird.’”

Rated R is not only weird; it’s dark, hilarious, furious and beautiful. It was unlike anything filed under rock music at the time, and that’s why it stood out then. In the 20 years since the album’s release, Rated R is a blueprint for the band’s future success, a calling card and warning sign that says this band will regularly defy expectations.

“Kyuss had rules…religion,” Homme said in 2007. “I wanted to do the exact opposite — no rules. It’s about the search for something that sounded great, no matter where it was. We wanted to be the antithesis of all other bands.”

A casual look at the “2000 in music” Wiki page, you’ll notice how out of place Queens of the Stone Age was. N*SYNC and Britney Spears were flirting with losing virginity while ruling the pop charts. Eminem released his second album, The Marshall Mathers LP, complete with odes to Em’s ex-wife “Kim” and “Kill You.” Rock music was just as full of MTV-approved acts like Kid Rock aping Metallica’s “Sad But True” on the single “American Badass.” Creed re-introduced Christianity to metal with its multi-platinum Human Clay. Santana cleaned up at the Grammys, with the help from Matchbox 20’s Rob Thomas, Everlast, and Eagle Eye Cherry.

Looking outside the top-selling albums of the year, rock in 2000 was either alternative sounds that mainstream audiences weren’t quite ready to embrace (Ween’s White Pepper, Deftones’ White Pony or Modest Mouse’s The Moon and Antarctica), or platinum-plus-selling nu-metal (Disturbed The Sickness, Papa Roach’s Infest, and Limp Bizkit’s Chocolate Starfish and the Hot Dog Flavored Water). Legacy acts like Pantera, AC/DC, Smashing Pumpkins and Oasis tried to make some noise during “The Return of the Rock” era, and they weren’t as successful as the dominant, ADIDAS-clad bros.

Still, for all the parental advisory labels, nu-metal was never dangerous. Rather, it was juvenile. Kid Rock might have put a picture of a middle finger on the Devil Without a Cause CD, but he would never enter a room, rifle off a list of drugs in a crowded room and let it sit, without connotation or annotation.

“Nicotine, valium, vicodin, marijuana, ecstasy and alcohol…c-c-c-c-c-cocaine,” Homme sings on the opening track, “Feel Good Hit of the Summer.” Is it an anthem? A band rider? A rock ‘n’ roll cocktail that Judas Priest singer Rob Halford claims to have invented before singing on the track? Therein lies the power of Rated R, an album that knows saying “fuck” 46 times in a song isn’t as memorable as the neon blue attached to the MPAA rating, R: “Restricted, to everyone, everywhere, all the time.” The designation plays on social norms, making it an automatic forbidden fruit.

“The goal has been to agitate,” Homme said in a 2017 interview in Dublin. “I want to represent something beautifully deranged and damn near god-awful.”

Rated R is the starting point for Homme’s prodding mission, written in a Joshua Tree, California, bungalow with then-bassist/singer Nick Oliveri and recorded with Chris Goss and a handful of guests like Halford, Screaming Trees’ Mark Lanegan and drummer Gene Trautmann, among others. Pushing the boundaries was key for the musical commune of talent on Rated R, and Goss told XFM that “every song had to change up.” The bizarre is the only consistent element across the album.

“Leg of Lamb” is a structure-less song with a slippery, sloppy guitar solo in the middle of dueling guitars that sound like car alarms panned left and right. “Better Living Through Chemistry” is an anti-drug song that opens with bongos, a middle that fades out and back in before returning to its paranoia. “Monsters in the Parasol,” a track originally recorded on the fourth volume of Homme and friends’ Desert Sessions compilation, is robot rock about Homme’s first LSD trip where his friend’s dad came home just as the drugs kicked in. For those who wanted the heavier sounds, there is the one-take “Quick and to the Pointless,” with Oliveri yelling, drooling and howling. With each track, another head is turned, as the re-recording of Mondo Generator’s “13th Floor,” titled here as “Tension Head,” is followed by Dave Catching’s instrumental, acoustic “Lightning Song.” Hell, the album ends with a test in patience as jazz horns topple each other on “I Think I Lost My Headache.”

Within Rated R’s weird world, however, there are more straightforward, darker pop-rock songs like the lead single “The Lost Art of Keeping a Secret,” “Auto Pilot,” and “In the Fade.” The three tracks are among the band’s best, showing how well the band works within pop-rock songwriting while destroying that formula. “The Lost Art of Keeping a Secret” could be a comment on society’s need to constantly make public every detail, or it could be an anti-drug song. Such mystery goes against the explicit loud-quiet-loud formula of radio-friendly rock ‘n’ roll. “Auto Pilot” sounds like a desert love song with its chorus of “I wanna fly, wanna ride with you,” sung by a goatee’d hound in Oliveri. “In the Fade” re-introduces Lanegan’s to the world not by reestablishing his loner vibes, but casting him in a new, triumphant light as he sings on the chorus, “Ain’t gonna worry…live till you die.”

Was music ready to change Queens of the Stone Age’s dial? Not quite. Early reviews were favorable, but still defined Queens as stoner rock, attaching Kyuss’ legacy to a band that sounded nothing like Kyuss. A slot on Ozzfest 2000 ended prematurely because Queens of the Stone Age would never fit alongside the then-popular rock sounds of Incubus, Static-X and Godsmack. Walmart initially refused to carry Rated R unless the band removed “Feel Good Hit of the Summer,” then insisted on a warning label.

“It’s fun to push buttons,” Homme told Rolling Stone in 2000. “If you’re not making someone pick sides, it’s not art. It’s only really good if they don’t know until it’s too late.”

The mix of fuzz-laden rock, big-name guests and weird detours with lyrics that keep the listener at arm’s length can be found on every record since Rated R. By 2002, with Dave Grohl playing drums, and nu-metal in the permanent rearview, Songs for the Deaf propelled Queens of the Stone Age into the stratosphere. Just as Rated R toyed with the idea of censorship, Songs for the Deaf poked fun at radio rock’s insistence of repeatedly selling the same song. “No One Knows,” a song with a drum solo, topped the Modern Rock charts and earned a Grammy nomination. On Lullabies to Paralyze, the weirdness remained in tact on heavier tracks like “Tangled up in Plaid” and “Someone’s in the Wolf,” sitting alongside bigger hits like the cowbell-infused “Little Sister” and could-be-pop jam “In My Head.” Era Vulgaris was the most blatant middle finger, as Homme groans, “I’m high class, I’m a whore, actually both, basically, I’m a pro,” on “I’m Designer.” With each album, the band mutated, bringing in guests like Lanegan, The Strokes’ Julian Casablancas, Elton John, and ZZ Top’s Billy Gibbons. To date, the band still pushes buttons, causing a stir with its fans by teaming up with producer Mark Ronson on 2017’s Villains even as the album roars into songs titled “The Evil Has Landed.”

The more rock music stays the same, the more Queens of the Stone Age change, exactly as Homme promised.

“I always feel like an outsider,” Homme told Jim Derogatis, then reporting for Guitar World in 2000. “I’ve always tried to be outside of whatever’s going on. I play rock and roll because I want to do something that someone else isn’t doing. I’m sort of free to run the range, because I’m not competing with that bullshit. I couldn’t ask for a better time. It would be much worse if there were a bunch of bands trying to sound like us.”

No other band could sound like Queens of the Stone Age, especially on Rated R.

Published in Culture, Features and Reviews