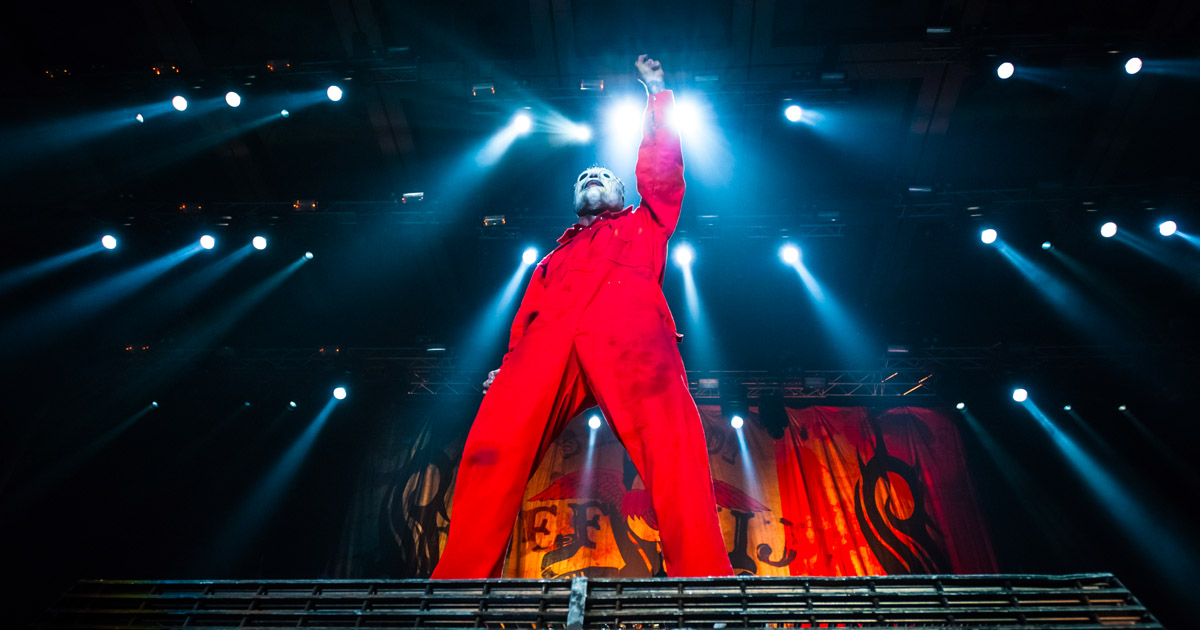 Slipknot are not an easy act to cover. Their fans are so devoted they proudly masquerade as “Maggots,” no doubt rejecting any attempts at tribute by other bands, as the larger metal scene has often rejected their favorite band. Hell, it took this writer years to come around on Slipknot. However, some brave souls have gone out on a limb and done exactly that. Benighted recently ratcheted up the risk by not just covering a beloved band, but by doing it in a genre where that band might not get respect: deathgrind. They went for a surprising song, too. In honor of that, here’s a list of the most surprising and just downright badass covers of Slipknot songs.

These French deathgrinders loaded up a deluxe edition of latest LP Obscene Repressed with a bonus track cover of this self-titled bonus track. Its status as such makes it a shocking one, as it’s not exactly one of the more popular picks. However, a short run time and relatively punk energy makes the translation to something grinding relatively easy, while the blunt lyrics work with the brutality. The original featured a voice demanding, “Give me a scream Corey,” while this time around the producer asks for a “bree” from pig squealing vocalist Julien. Both frontmen oblige to kick off the song. Get this, indeed.

This cover might even be more of a surprise than Benighted. These Chicago pop-punks pushed their fingers into Slipknot’s biggest song last year for Rock Sound’s Worship and Tributes: Volume II. The first thirty seconds match the band’s other 2019 release, an acoustic EP, but they bait-and-switch for a faithful cover — even busting out the baseball bats. Vocalist Dan Lambton deepens his vocal register, and while the spoken parts warble slightly, he remains powerful when belting. Maybe he left earlier this year to pursue something more metallic.

This song was infamously cut from Slipknot’s debut for its lyrical content, which referenced a horrific case of a young woman being buried alive. However, it wasn’t cut for its disturbing nature but because the story ended up being fiction, and the author stepped in. It’s a shocking objection, as the band did the creepy caper justice in the song. Similarly, Employed to Serve did the original justice in this cover. It’s so on-point that the runtimes match at 4 minutes and 25 seconds. The differences are mainly in production, with the UK metalcore band opting for a more modern sound and mixing backing vocals higher in the chorus. The dual vocals from Justine Jones and Sammy Irwin add another layer of dynamics.

Carnifex’s take on this Iowa staple is firmly on the 666 side of things. Like one-time deathcore peers Bring Me the Horizon, much of the difference is in the devilish vocals, here provided by Scott Lewis. It’s done impressively, and you can’t really blame the band for not putting their increasingly blackened influences on it too much, no matter how rad it could turn out; remember, Maggots are a devoted fanbase who could cry sacrilege. “The Heretic Anthem” was a longtime set staple by the time it was put to tape for the Bury Me in Blasphemy EP, which also features a Nine Inch Nails cover to round out some surprising influences.

This super group was only a super duo back when they took on this Vol. 3: (The Subliminal Verses) classic. YouTuber Jarrod Alonge and Red Handed Denial vocalist Lauren Babic covered “Duality” by both coloring within the lines and, at times, scribbling outside of them. While much of the structure is the same, a melodic lead over the chorus changes the feel, as do the djenty metalcore tones. They take that one step further, with a discordant breakdown after a requisite atmospheric build-up ala Northlane. Babic doesn’t attempt to emulate Corey Taylor, instead aiming for his power, while ensuring her delivery matches her band’s take. Now imagine if As It Is’ Patty Walters was in the band at this time.

Periphery’s take on “The Heretic Anthem” was always a little tongue-in-cheek in concept. The opening drops the creepy countdown in favor of a proclamation, “Ladies and gentlemen, I give you ‘The Heretic Anthem,’” which wouldn’t be goofy if not for the Dr. Evil-style voice. The band’s penchant for fun was solidified by this time — the cover appears as a bonus track on their second LP, on which they named a blastbeat-laden track “Have a Blast” — but they deliver the end result with a straight face. Vocalist Spencer Sotelo led this project, which surprisingly found band founder/guitarist Misha Mansoor holding down the drums and the line-up down a few members. All in the name of fun!

ThoSe FucKing HoRses · THE HERETIC ANTHEM

This is one of the most unique covers on this list, with Conjurer bringing the same level of nuance and dynamics to loudness they did on critically acclaimed LP Mire. This version of the song, the first half of Slipknot’s desperate stalker duology, appears on a digital covers comp with fellow UK genre manipulators Palm Reader. The original was already a downtrodden romp, but Conjurer introduce a doom metal plod, as the guitars rumble. Vocals are positively demented, with some of the growls sounding like a possessed demon. The rhythm under the solo tastefully incorporates panic chords, encompassing the anxiety felt by the character as he battles his desires. Similar to how the original is a companion to Pt. 2, so too this cover is a loving companion to its inspiration.

Architects’ Sam Carter is one of metalcore’s most recognizable vocalists, with his voice swelling from yell to gritty scream within words or even syllables, all while emoting pain. The half-yell, half-scream is quite different than Corey Taylor’s half-sing, half-yell, but the Brits make it work. Solidifying it even more, the cover features a requisite “blegh” right before the closing breakdown, which adopts the group’s trademark bounce. This metalcore take on Slipknot’s first single appeared on Rock Sound’s Worship and Tributes compilation.

Slipknot have been known to deliver deranged songs, but this is a more straightforward modern metal track. Palm Reader didn’t release their cover on the aforementioned split with Conjurer — it appeared on the Kerrang! Ultimate Rock Heroes! compilation — but they maintained the same experimental energy. The UK metalcore deconstructionists do exactly that, inverting the energy in the verse and chorus. The pulsing refrain goes to a slower place, pushed and pulled along by panic chords, which also take Slipknot’s groovy verse to a more frantic place. It makes the composition more unsettling.

Bring Me the Horizon – “Eyeless”

Ironically, it’s the sampled Amen break that was more indicative of Bring Me the Horizon’s career trajectory than the brutal Slipknot cover that followed, closing out the Hot Topic deluxe edition of Count Your Blessings. Though they’d increasingly experiment with electronics and melody over time, that’s far from the focus here. The layering of Oli Sykes’ powerful bellow and shrill shrieks give this a deathcore flavor distinct from the original, as does the song-ending slowed-down breakdown — a genre staple!

Spite hadn’t even played their show when they released this cover. It came out a month after their Misery EP and solidified the fact that their moshy downtempo deathcore was influenced by these masked madmen. It was hinted at on that release’s “Red” and solidified on the bouncy yet driving delivery of “Death Sentence” from their self-titled follow-up LP, but this cover makes it undeniable. Their performance is pretty spot-on to the original — up until the ending, which features Darius Tehrani flexing his throat with unintelligble guttural growls. It’s a brutal ending to an already devastating song.