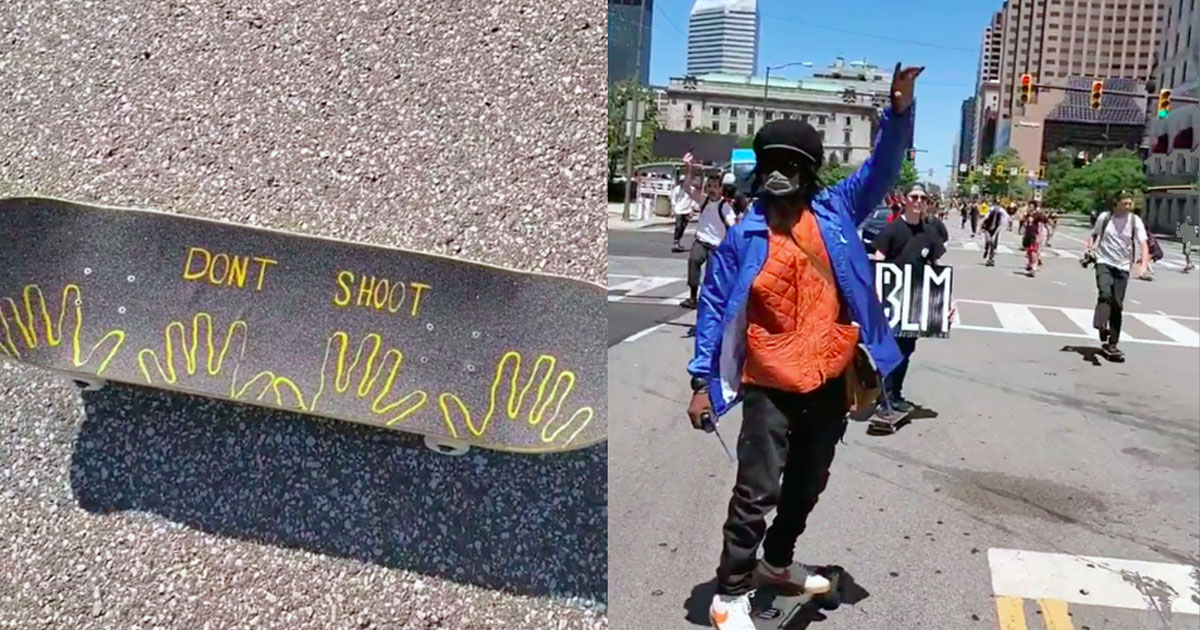 In recent weeks, protesters have marched and demonstrated against racism and police brutality in every state. But some are taking to the streets on longboards, penny boards, roller skates, bicycles, and more. From Long Beach to Phoenix, skaters are turning up and kickflipping out to support Black Lives Matter and stand up against police brutality. These events, with names like “Push For Peace” and “Push Against Racism,” show how skateboarding’s spirit of rebellion and freedom can support bigger movements for equality.

Squint for details on this Sunday’s Pushing For Justice peaceful protest on wheels! Very excited to see everyone there ✌🏾✊🏾✌🏾 #pushingforjustice #blacklivesmatter

The near 300 skaters and cyclists in attendance traveled 2.5 miles from Public Square to Greenwood Park. Video on social media shows boarders rolling through the main streets of the downtown area, some carrying signs. At the park, the organization held a raffle with the help of local sponsors and raised approximately $1,000 for Black Lives Matter Cleveland.

“We put together the flyer only a few days before the event and to our surprise, we had an incredible turnout considering the short time for promotion,” the organizers said.

“It was great to see people that we would never normally see at our skateboarding events, like cyclists and roller skaters, participate and speak out against police brutality and racism,” they shared.

The crowd stopped at Market Square to listen to various speakers including skateboarder Jeffrey Stringfield and rapper Ja’Ovvoni Garrison.

Stringfield led chants and shared in his speech, “You know me like I know you, and I love you.”

There’s one race and that’s the human race! We are one! Here’s a glimpse of @spooky.jeff and @grandlyricalaudio ‘s inspiring words yesterday at Market Square during the Pushing for Justice protest yesterday. Thanks to everyone who came out together to skate against racism and police brutality. We roll together onward in peace.

Stringfield shared with Hard Noise: “I feel as if skaters know what it is like be oppressed. We aren’t wanted many places because we are seen as outcasts who come to stir up trouble and cause destruction when really all we want is to feel free and enjoy our life on the board. So, it’s easy for us as skaters to relate to the movement of wanting to be seen for who we are and not what society projects us to be.”

We came together as a community! We pushed hard against racial inequality and police brutality! OUR voices were heard! Most importantly we spread love far and wide and thats what matters most. With true love, compassion, sympathy, empathy, and understanding for one another.. racism will cease to exist! We accept eachother as we come! We remember to ask before we assume. We remember the have patience with another. We remember to love those the same way we want to be loved. WE ARE ONE! 🤟🏿✊🏿

“There is such a thing called ‘normalized racism,’ which is just the evolution of racism over the years that has been accepted as normal,” Stringfield shared. “I believe it is important to be aware of this and for us to not only stand up for ourselves but each other when we recognize it.”

He noted that some may make mistakes in their activism, and that’s okay. “As we continue to learn from our mistakes, we must accept our mistakes and others to continue to push growth amongst ourselves and those around us,” he said.

Joe Gerin is a local celebrity at Kent State University and at the University of Akron who rode through the streets of Cleveland during the protests. Students and faculty called him “Longboard Jesus” for his tricks, long hair, beard and at times, his sash and robe.

Shortly after this video was uploaded on his YouTube page in May, Gerin cut his iconic hairdo and donated his locks to Wigs For Kids.

He found a happy place outside of his now-retired persona saying, “It was pretty cool to see so many skaters in Cleveland come together and protest. No bad vibes, no hate. Just peace and skateboarding.”

Cleveland native and 22-year-old musician Michael Taddeo (Rusted Hearts, PAWN, Motives), who’s been skateboarding on and off for 12 years, was also in attendance. Taddeo is also well-known in the punk community for his funny tweets on Twitter account @milkinhisbag.

“I’ve just been trying to get out to every protest I can, but seeing one put together by a community I love and one I’ve been a part of for a while definitely made me want to be a part of it,” shared Taddeo about the skate protest.

“I was there to listen, learn and amplify the voices of the speakers,” said Taddeo. “We were loud and made our voices heard as a community.”

Another skater, 24-year-old Kristina Wolin, shared how the protest was marked by friendly and helpful people throughout the Cleveland community.

“Some people wiped out going down the bridge and we made sure that they were okay and we kept pushing forward,” she said. “People were honking their horns in support of us.”

Day 23/365 it was an amazing and empowering day to skate and protest the injustices of this country together! I met some really amazing roller skaters. WOW just amazing! . . . . #rollerskating #quadskates #moxiskatedailychallenge #365skatechallenge #purplerollerskates #suregripboardwalks #suregrip #rollerskates #skatejournal #pushingforjustice

Hard Noise asked each skater which organizations they are supporting during this time and in the future.

Taddeo shared, “Sign this to make the KKK a terrorist organization, which should’ve happened long ago.”

“Then donate to this fund which is set up to establish a network of Trans-led and Trans-owned, sustainable housing for black trans women, prioritizing those who are homeless, sex workers, or living with HIV,” Taddeo said.

Wolin discussed a recent case out of Akron where 18-year-old Na’Kia Crawford was shot and murdered through her car window at a stoplight.

“We believe that it was a hate crime,” she said. “Right now the family is accepting donations on the GoFundMe ‘Na’Kia Crawford Memorial Fund’.”

The fund is being run by her father, Nicholas. The funds will be used for funeral expenses, grief counseling, endowing a private scholarship and more.

Stringfield noted, “Everyone who supports the movement and who is doing something to make a change, thank you. We are one in this. We cannot make change without the support of each other. Unity is Love.”

The individuals behind Public Square Group do not have any events scheduled currently, but “we are definitely looking at hosting more events in the near future to help benefit Black businesses and other organizations that benefit the Black community in Cleveland,” they say.