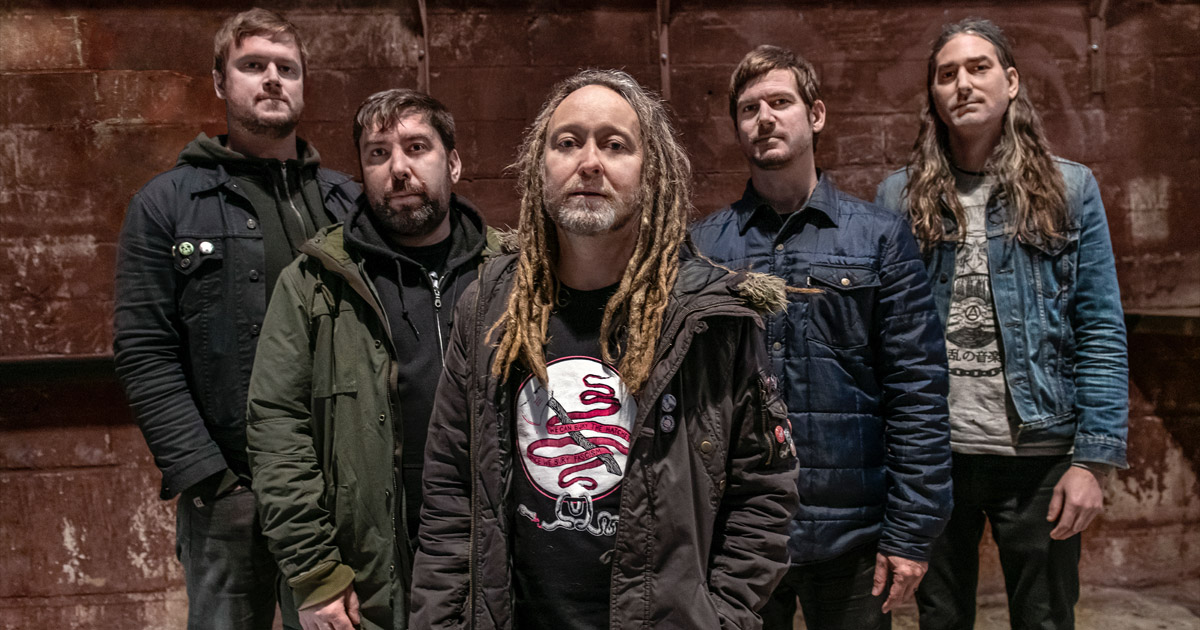 Strike Anywhere’s music is timeless because they write about the essential truth of America: that it is a country permanently drenched in blood — established on stolen land by rich hypocrites with lofty ideas of freedom and equality — and that not enough has changed since then. Strike Anywhere’s newest EP, Nightmares of the West, out July 17th via Pure Noise Records, was written in fits and starts over a period of five years. “This is a group of songs that felt like a little family. They became to us more than the sum of their parts,” said lead singer Thomas Barnett. “This is a record, it felt like.”

Despite its long production process, Nightmares sounds like it could have been written in a blind rage last week. On paper, some lyrics feel cheesy — the kind of stuff you’d use to describe the world as a thirteen-year-old punk raging against “Propaganda plantations” and the flow of “oil and blood in the Apple Store.” However, given the past several months of mass protests, civil unrest, police brutality, public health crises and economic desolation presided over by an openly fascist President, they nailed it. If anything, Strike Anywhere has been right all along. Let your inner angsty teen rejoice!

Barnett seemed bewildered and excited by the forces of history that made his work all the more relevant. “It cannot be overstated how important and special this feels, seeing some of our songs be used at protests occasionally. The toolbox is wide open now. Like all the little tiny pieces of radical culture, of activism, the connective tissue between that and all the liberation movements of history. It feels like they’re all at the table for this one. ”

“We used to have punk meetings…in 1991-4, where we’d talk about Food Not Bombs, and antiracist action in riot grrl,” Barnett recalled fondly. “We’d sit on the Lee monuments till the cops came, just to litter it, just to be the people on it. Cuz that shit was lording over us our whole lives.”

On “The Bells,” the ghosts of the Civil War haunt the present and rewrite history. Barnett triumphs over the South’s revisionist narrative by leading gang vocals about the true legacy of the war. “Leaders’ and resistors’ breath/control liberty and whitewash death.” The song also deals with the essential contradiction of the monuments: glory and honor are given to the losing side. In a witty call and response verse, Strike Anywhere decry and ridicule anyone who’d argue Confederate statues are a way of learning history. “No one remembers it all/till monuments fall.”

Strike Anywhere is at their best when unpacking conflicting elements of life in America. “Frontier Glitch” informs the listener that “Men of peace just said/the state of the world is war.”

Closing track “We Make the Road by Walking” commands us to “Carry all your broken dreams/Mile after mile/Step after blistered step” in spite of it all. Barnett sees punk as ideally equipped to deal with these conflicts.

“I think punk is kind of uniquely positioned for that because unlike the hippies and most of the 1960s counterculture, punk embraces a lot of irony and uses the cognitive dissonance as a part of its art,” he explained. “Punk does have that value, the ability to take the weaponized cognitive dissonance of the establishment, of white supremacy, of patriarchy, of capitalism and the war of each against all, and move it into something that opens a door in you.”

Barnett had no delusions about the efficacy of songs. “We definitely don’t have a grand idea of solving the world’s problems by writing punk songs,” he admitted. “But it helps us get a grip on things and stay focused, and have courage, and celebrate something, and mourn something.”

That piece of political punk songwriting is key. Nightmares of the West is a record about mourning. Mourning the lives lost to white supremacist violence at home and American imperialism abroad. However, rather than dwell on these losses, Strike Anywhere shows us that the best act of mourning is the ways we move on to honor the dead.

Even though a punk song won’t solve problems on its own, it can ignite us to action. “Listen deeply,” Barnett advised. “Listen in a way that feels new to you. Even if you’ve been involved and been on the ground level of activist communities, everyone has got to make a change now. The listening is your power, and that’s where it starts.”