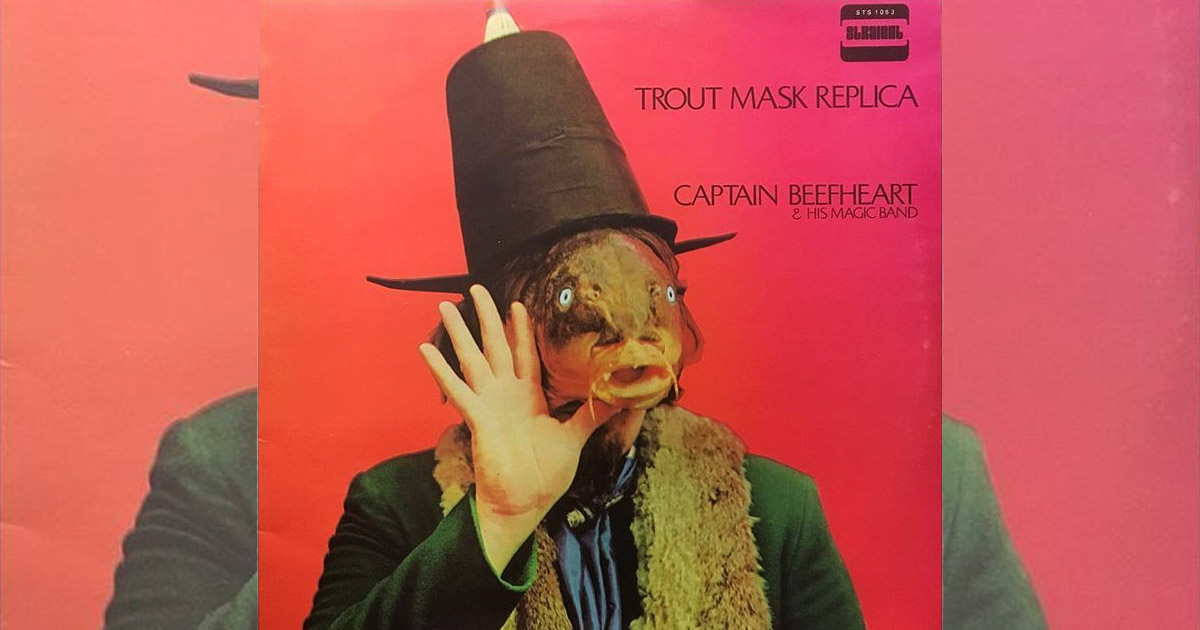 “Captain Beefheart, the only true dadaist in rock, has been victimized repeatedly by public incomprehension and critical authoritarianism… What the critics failed to see was that this was a band with a vision, that their music, difficult raucous and rough as it is, proceeded from a unique and original consciousness.”

When legendary rock critic Lester Bangs wrote these words for Rolling Stone in 1969, it’s unlikely he had any notion of the movement that was about to swell under his feet.

1969 was a watershed year in music journalism — this was the year of Led Zeppelin I, Tommy, and The Beatles’ final performance. These were the stories rock fans wanted to hear, and most music journalists were happy to serve them up.

But others were hungry for something radically different, challenging, and fresh. Thus, a bold new genre of music journalism bubbled up from the underground: long, effusive, and overwritten retrospective reviews of Captain Beefheart’s 1969 avant-garde “rock” album Trout Mask Replica.

Like their subject, the reviews were controversial and inaccessible. To untrained eyes, many of them appear to be nothing more than pretentious, masturbatory exercises in elitism. But I implore you to look deeper, reader — if you do, you’ll find a never-ending wellspring of profound, audacious craft that has inspired generations of critics, journalists, and narcissists.

What is a “retrospective,” really? Lester Bangs pioneered the art of the TMR review, but does his work possess all the hallmarks of a full-blooded TMR retrospective?

Bangs’ review certainly presages the fledgling genre’s gushing, overwrought descriptors: to him, TMR “is a total success, a brilliant, stunning enlargement and clarification of [Captain Beefheart’s] art.”  He also established the movement’s penchant for left-field comparisons with his observation that the album was “more in the nature of a tribal Pharoh Sanders Archie Shepp fire-exorcism than the ranting noise of the Blue Cheer strain of groups.”

In these words, we see an awe-inspiring display of self-satisfaction that future TMR reviewers would struggle to imitate, let alone surpass.

That said, Christgau’s review introduced one important innovation to the genre: condescension towards fellow TMR reviewers. Christgau mocked Rolling Stone’s Langdon Winner for calling TMR “the most astounding and most important work of art ever to appear on a phonograph record,” expertly ignoring the fact that Christgau himself had referred to it as “arresting, even brilliant.”

In 1979, Greil Marcus edited Stranded: Rock and Roll for a Desert Island, which invited rock critics to select and expound upon their “desert island disc.” For his chapter, Langdon Winner chose TMR, and what he wrote about it would finally give shape and purpose to the nascent TMR-retrospective movement.

“The listener,” wrote Winner, “always completes an artist’s work. In this regard Trout Mask offers two things that other records do not: 1) An enormous variety of musical puzzles that require a considerable amount of time and concentration to figure out, and 2) A seemingly inexhaustible supply of unfinished ideas that one can fill in oneself.”

Breathtaking. Winner’s essay contains far too many innovations to unpack here (note the pseudo-academic serialization, the ingenious redundancy of points 1 and 2), but his masterstroke lies in a single word: “puzzles.”

With this word, Winner revolutionized the genre. Earlier critics had pretended to “get” Beefheart’s nonsense, but this approach naively assumed that his album had a message or purpose. But if the album were an unsolvable mystery, then critics could continue to endlessly revisit the album without ever having to say anything of value.

The salad days of TMR criticism began. The New York Times compared Beefheart’s “impossibly dense and atonal chord clusters” to Stravinsky; Newsweek determined that Beeheart sounded like “a geezer raving about… what? Genetic engineering? A careless mother? His own obsessions? All of the above?”

There were no rules, no limits, no logic. It was beautiful, the zenith of music criticism as an avant-garde art form. But the good times couldn’t last forever. With every rise, there must come a fall.

In the mid-90s, unscrupulous journalists made a terrible discovery: if they included TMR on a “best-of” list, they could ingratiate themselves into the ranks of TMR critics without actually doing the difficult work of retrospectivising. What was once baseless slander was now proven true: journalists could indeed be very lazy.

Outlets rushed to follow the new vogue: The Guardian, NME, NPR, and Vox all added TMR to their “best albums of all time” lists, and even Rolling Stone debased themselves by placing the record in no less than three “best-of” lists. The dark age of the TMR retrospective had arrived: the sublime diatribes of yesteryear were replaced by commercial dreck.

But all was not lost. As the new millennium began, some brave young critics developed new, quietly original approaches to TMR retrospectives. Mark Richardson of Pitchfork, for instance, published a retrospective of Langdon Winner’s retrospective, bringing a previously unseen level of postmodern meta-commentary to the genre. The Guardian’s John Harris managed to turn his review of TMR into a confessional journey of self-discovery, complete with celebrity cameos. The third wave of retrospectives was on the horizon, and it would take the world by storm.

2010 – Present: Dead Beefheart and the Future of Retrospectives

Captain Beefheart died in 2010. That doesn’t matter; what does matter is how many intrepid young critics sprouted from his grave. Rolling Stone and BBC obituaries would introduce TMR to a young generation hungry to show the world just how sophisticated its tastes were.

The greatest weapon in these new critics’ arsenal was YouTube. The first TMR retrospectives on YouTube were amateurish, but replete with an undeniable charm; the hosts of “Velocities in Music,” for instance, described Beefheart as “a complete, like, dick, from the sound of it.”

It would not be long before TMR reviews recaptured their experimental bent — Anthony Fantano managed to praise the album for eight straight minutes before calling it “really annoying,” and Estelle Caswell of Vox intercut her own ravings with footage of music scholars saying absolutely nothing, thereby transforming her retrospective into an exploration of the Kuleshov effect.

And this new wave of overappreciation has only just begun. TMR was reissued in 2019 by Third Man Records, which is owned by famously high-brow tastemaker Jack White. And though it is just over a year old, this reissue has already proven a watershed moment in the history of the TMR retrospective. Dozens of outlets have jumped at the opportunity to dust off the hyperboles and bon mots that have fallen into disuse since TMR retrospectives fell out of fashion.

Thus, the future looks bright for the noble art of the Trout Mask Replica retrospective. Its rise, fall, and resurrection mirror the trajectories of so many other forgotten art movements, and like those, it deserves greater recognition. It is this writer’s hope that this article will inspire future generations of critics: if there’s a lesson to be learned here, it’s that sometimes, all you need to push the boundaries of imagination is some weed and a D-grade novelty jazz-rock album.