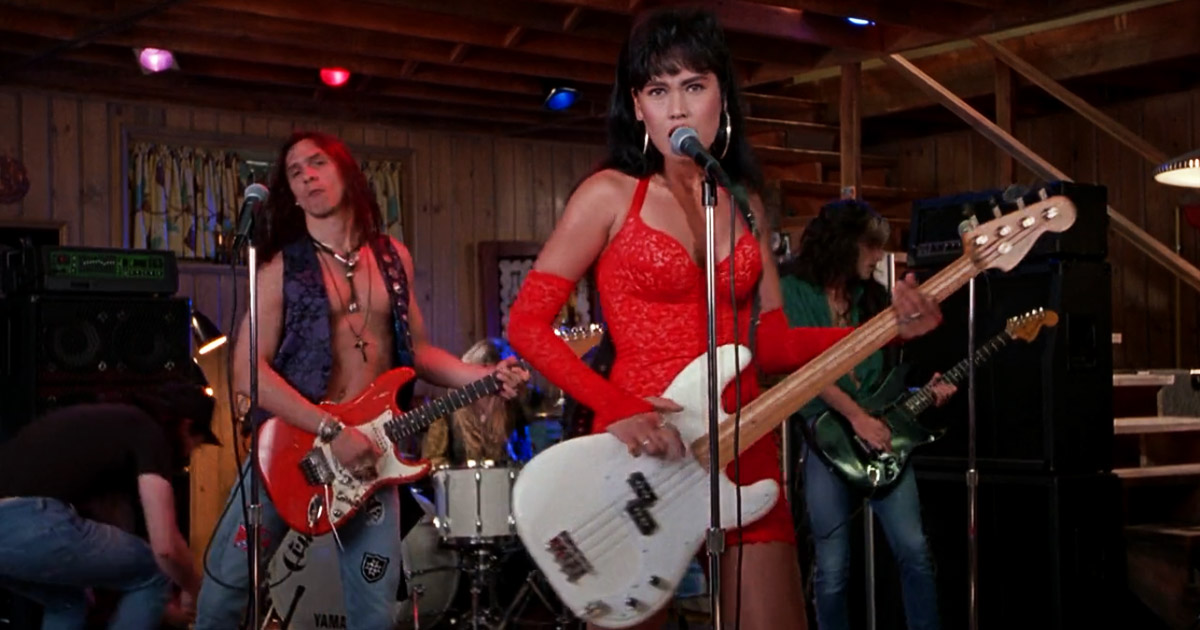 Music movies are rarely great. Such features are often strung together from behind the scenes drama, leaving the tunes to hover over montages. Outside of biopics, good movies and shows about fictional bands are even harder to find. However, these groups do exist, surprising audiences and stealing scenes. What follows is a list of the 15 best fictional rock bands and a few honorable mentions that propel routine fodder into a cult-like stratosphere. These are the talented few that make us think, “What if this band actually existed?”

Of all the music biopics, the best is the one that skewers them all. “Walk Hard” pokes fun at the genre’s formula, displaying the rise, fall, and return of a music legend. The “drama” is quotable and ridiculous (“The wrong kid died!”). The music, be it Cox’s ill-fated attempt at covering “That’s Amore!” or a cocaine-fueled punk version of “Walk Hard,” is just as hilarious and essential.

Sex Bob-omb from “Scott Pilgrim vs. the World”

With a yelp of “We are Sex Bob-omb, and we’re here to make you think about death and get sad and stuff,” Scott Pilgrim (played by Michael Cera) and his buds in Sex Bob-omb destroy the competition in writer-director Edgar Wright’s “Scott Pilgrim vs. the World.” Thanks to Beck and producer Nigel Godrich, Sex Bob-omb’s tunes are a raucous blast from the garage rock past.

The Lone Rangers from “Airheads”

Nowadays, I’d pay to sit in a room and listen to Adam Sandler, Steve Buscemi and Brendan Fraser talk about whatever. But if you tell me these guys were in a movie together, playing a kick-ass rock band that holds up a radio station to play their song…obviously, the conversation is going to steer into, “Who were the ad wizards behind this one?”

Before getting dragged into a messy drug deal and Harvard-related blackmailing scheme, Malcolm, Jib and Diggy are just three nerdy teenagers with a hiphop/punk band called Awreeoh. High school, amirite? Pharrell Williams wrote and produced Awreeoh’s music for the “Dope” soundtrack, with actors Shameik Moore, Tony Revolori and Kiersey Clemons performing as their characters for the songs.

Sincerely stupid, acoustic bro-rock ate up radio waves in the ‘90s, but it never sounded better than when fronted by Pawnee’s own Andy Dwyer.

Spinal Tap from “This is Spinal Tap”

The Ain’t Rights from “Green Room”

A touring punk band finds a gig at the wrong club in director Jeremy Saulnier’s 2015 horror-thriller. Not to ruin anything about this tense movie, but it is supremely badass that The Ain’t Rights start their set by agitating the crowd with a cover of Dead Kennedy’s “Nazi Punks.”

Something She from “Her Smell”

In Alex Ross Perry’s drama, Elizabeth Moss captures the panic, pain and paranoia of a self-destructive rock star. Maddening as Moss’ Becky Something may be, songs like the above “Breathe” (written by Bully’s Alicia Bognanno) absolutely rule.

Some would argue these shredders saved the world with their music. Can you name another rock band that did that? No way!

So you think fictional metal can’t succeed? Take a look at Brendon Small’s Dethklok. The band’s debut shot to number 21 on the Billboard album charts. Subsequent releases peaked higher, with 2012’s “Dethalbum III” debuting at no. 10 overall, and topping the U.S. Rock and Hard Rock album charts. Throw in tours with Mastodon and Converge, and you have a case for how Small has the chops (and the jokes) to rock alongside metal’s biggest acts.

The Wonders from “That Thing You Do!”

We now interrupt this list for an irresistibly catchy ‘60s-style tune from an underrated 1996 musical comedy. R.I.P. Adam Schlesinger, the mind behind this and numerous other great songs. Had I never seen this, I would’ve never played music at all.

Pulled away from the mighty Tenacious D and loco jams of Sonic Death Monkey, Jack Black taught kids the power of rock in Richard Linklater’s 2003 hit comedy. These pre-teens make mincemeat of the competition with a killer cover of AC/DC’s “It’s a Long Way to the Top (If You Wanna Rock ‘n’ Roll).”

Conner4Real and the Style Boyz aren’t rock, but no list of fictional musicians is complete without Andy Samberg and Lonely Island’s hilarious, pop parody. I’d add that  “Fuck Off” is a pretty punk rock track.

Was Jane’s older brother’s band actually good, or was it simply enough for us back then to contentedly observe as Trent hoarsely mumble-moaned lyrics like “Ow! My nose / Ow! My face” over crunchy guitars? Yes.

Observe the power of Cassandra and Crucial Taunt. When Cassandra is introduced in “Wayne’s World,” she distracts Wayne and Garth from 1) the fact that they just secured $5,000 2) psycho ex-girlfriend Stacy and 3) a p.d.a. from their dude Terry. Later in the movie, Cassandra predicts the actual future by performing in a music video with a huge snake slithering all over her. So, basically, this movie and the career of Britney Spears doesn’t exist without Cassandra and Crucial Taunt. We’re not worthy.

Gino from “Billy Madison”; Gown from “Hot Rod”; Lustra and Matt Damon from “EuroTrip”; Dr. Teeth and the Electric Mayhem from “The Muppets”; Infant Sorrow from “Forgetting Sarah Marshall” and “Get Him to the Greek”; The Beets from “Doug”; Crash and the Boys from “Scott Pilgrim vs. the World”; Celeste from “Vox Lux”; Autobahn from “The Big Lebowski.”