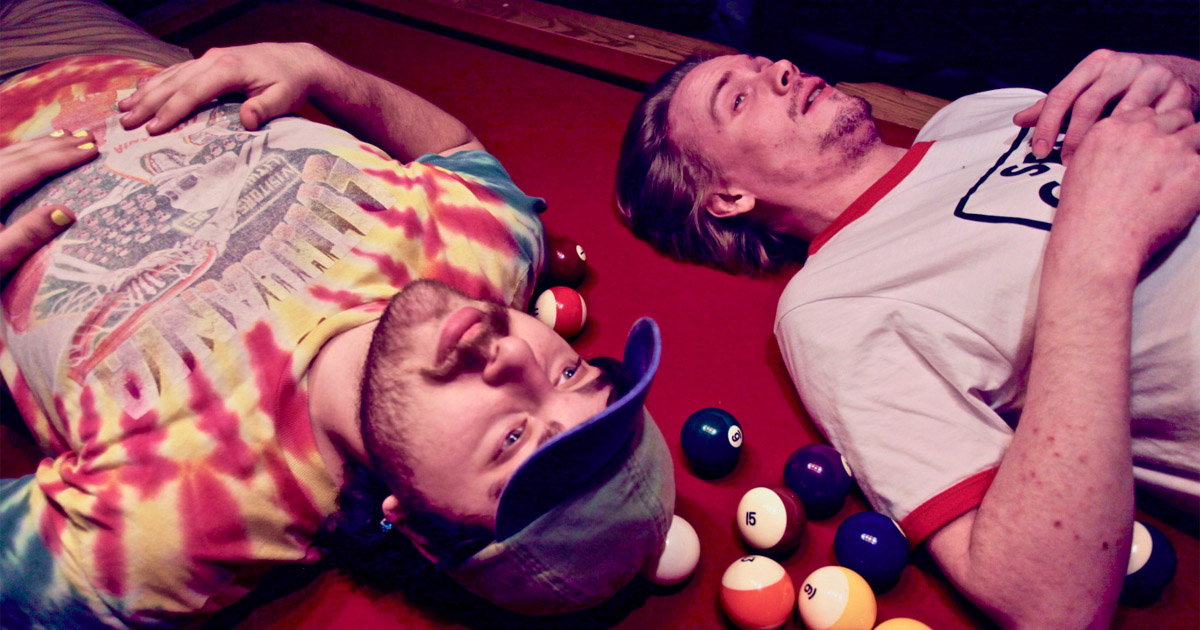 NYC’s self-proclaimed goof rockers TOP Nachos proved that they’re gifted wizards on last year’s Dank Side of the Moon, capable of making colossal sounds with just two people. But vocalist/guitarist Eli Frank and vocalist/drummer Kenny Hauptman might also be psychic. They released the self-explanatory “Donate 2 the Bands” earlier this year, but it was written and recorded long before shows and tours started getting covid-cancelled. And new single “Hang,” recorded in the same session, is all about wanting to kick it with friends but not being able to. Sounds familiar, no? Thankfully, the on-the-nose nature of the songs stops at the subject matter — TOP Nachos makes music that’s fun as fuck.

Hard Noise is psyched to premiere the latest single “Hang,” part of the Two More Songs EP coming later this Fall.  The song is loaded with meaty riffs, explosive drums, and topped with infectious vocal harmonies. Listen below, and read our interview with Eli to hear more about accidentally predicting the future, the bands they want to see live once this is all over, and all the weed they absolutely 100% have not been smoking.

Eli Frank: “Hang” is a reflection of how tough it can be to make plans with your pals. Seemed easier back in the day, call em up and they’d come biking over or they might get dropped off. But yeah, we wrote this song about a year ago and everyone had lotsa stuff goin on, so it was hard to find times to hang.

Now it’s a similar result, but a completely different context. We’re all mostly stuck home with loads of time on our hands but we still aren’t able to see our friends. Still got my cat tho!

What was the writing and recording process like for the Two More Songs EP?

We like to jam it out to start off every practice, and each jam will usually lead to a new song. First we get the riffs down, then the general song format, add little dynamic shifts and lastly the lyrics. We find it easier to feel what vibe the song has and then ascribe its meaning later. We did the bulk of the writing at our old house show spot in New Paltz (RIP nachohouse).

When we had our EP ready to go we recorded in Saugerties with our pal Jay Anderson (operation audio). We cut the drums and rhythm guitar live, then added more guitar and vocals. We tried to keep the new EP more focused and less cluttered than our first album “Dank Side of the Moon”.

It’s pretty surreal that you guys recorded “Donate 2 the Bands” and “Hang” last year. How does it feel to be blessed and cursed with the gift of prophecy?

Not feeling too blessed, haha. Damn these prophetic powers of ours! It’s definitely been a while since we recorded the tunes, and we wish they were being heard under different circumstances. We just hope the music can lift your spirits up even the tiniest bit.

Maybe the next song we write should be called “corona is gone forever”. Hopefully our powers will still work!

How are you getting through the pandemic? What’s your go-to stress/anxiety relief?

We’ve both been playing way too many video games. Kenny with his SSX tricky via GameCube and me with my old-school Runescape (don’t judge). It’s just like I’m in middle school once again, except I hang out with even less people!

Obviously we haven’t been smoking any weed cuz it’s illegal! As it should be! Just re-watching every tv show and movie, and definitely not smoking weed. At all! That stuff is for fools!

Got a rowing machine as well since the gym isn’t an option anymore, it’s definitely a great piece of equipment for small apartments. Using that and band practices to stay nice and swoll, plus newer tunes!

If you could pick any 3 bands to play the first show you see once shows are a thing again, who would they be?

We’d have to go with a homies-only show for sure. Number one is Dolly Spartans of course. We went on our first real tour (to the Midwest and back) with them around 2017 baby. Second is Oceanator cuz they’re putting out some of the best tunes during this pandemic. Third would be Sweet Pill, who are our favorite Jersey sillyheads. We were on tour together to SXSW when all this Covid-19 ish went down. Couldn’t have picked a better group of people to become our pandemic pals!

What kind of music are you currently writing, and what will it tell us about the future?

We’re coming at you with the hard-hitting, eye-opening content the world needs right now…probably our deepest and most meaningful album ever…with songs about gummy underwear and flat earthers, what more could you ask for!

You know you can count on TOP nachos to deliver the stupidest songs you ever heard, but hopefully they’ll make you wanna dance around! Do it! Why not? It’s 2020, no one cares!