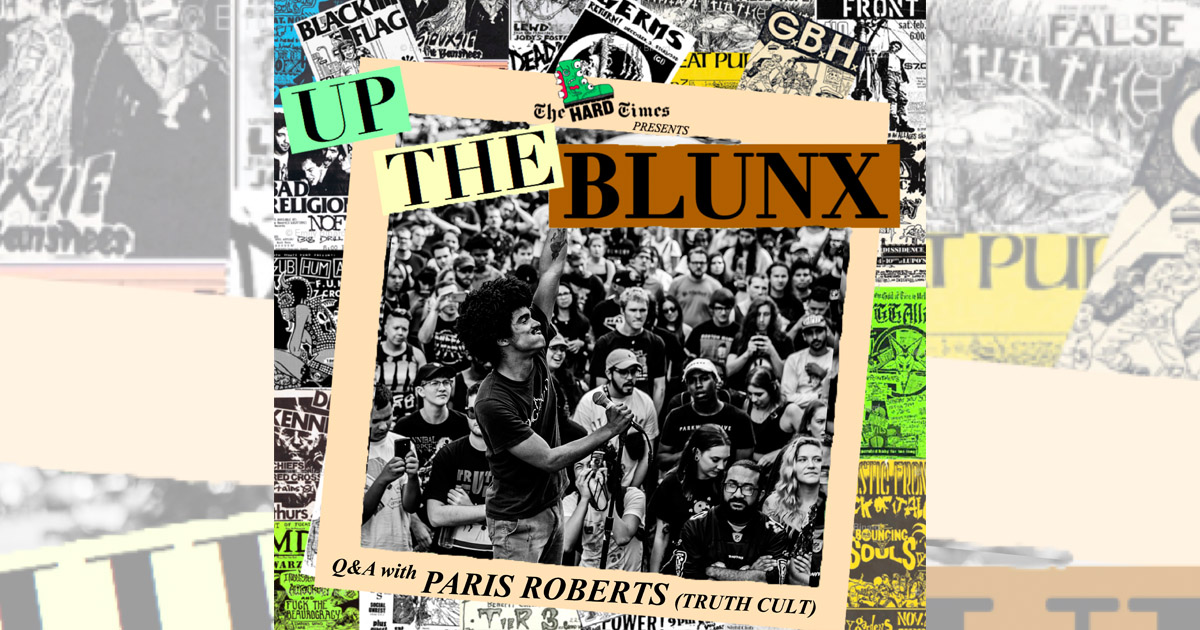 Up the Blunx Featured Artist: Paris Roberts of Truth Cult

Up the Blunx is a podcast where two black punks from different walks of life get together to voice their opinions on everything from straight edge to condiments to the police. The show, from comedian Kevin Tit and End It frontman Akil Godsey, regularly features music from black artists. In this series, we dig a little deeper into the artists behind the music featured on Up the Blunx. This week’s Q&A is with Paris Roberts of Baltimore’s Truth Cult, whose song “Hell Baby” was featured on episode 2.

How old were you when you discovered punk, and what about it appealed to you?

I wanna say I was about 6 or 7 years old. Like a lot of others, I was playing a lot of the early Tony Hawk’s Pro Skater games, and even Crazy Taxi with “All I Want” by The Offspring kicking off the game. Super bad ass. Loved how fast a lot of it was, and just how raw/catchy it could get.

When I dove deep into those soundtracks, I knew that I would always have a thing for Alternative music. I would sneak to the living room late at night to watch “Headbangers Ball” on MTV2 and write down all the fucking awesome tracks and music videos I would see.

What was your experience like when you first started going to shows?

My first experience was kind of wild. I went to a Warped Tour and seen Cake live back when I was in like middle school, but in early high school when I realized there was a scene right under my nose in Baltimore, it was almost like finding a gold mine.

I was really ecstatic and stoked on all of it, to the point where I would even go to the Charm City Art Space shows that only 6 people were at. I remember thinking that this shit was incredible, and I needed to go to every and all shows possible that were happening. Looking back it was a bit OD frankly.

Has being black in punk ever led to any particular struggles with your identity?

Most definitely. I mean, people talk to me differently all the time, as if they have never interacted with a black person before. Its all in the language/vernacular, and I didn’t realize till I got a little bit older. When I was younger and real excited going to shows, I had rarely seen any black people in bands/shit I enjoyed. There were also times where I could hardly relate to some of my white peers in the scene, and feeling bad as hell about it.

As said before, I never noticed till I got older, so I suppressed a lot of those feelings of guilt and paranoia because I figured that was just the way it is. Luckily, later on in high school, I met some inspiring people who are black and in the scene, most of which being in bands that I love greatly to this day. Funny too, Dag Nasty being one of my favorite Dischord bands, when I found out that the OG singer is black, it was like fucking Christmas man, I was so stoked; that was one of the bigger inspirations.

What artists / bands would you say influenced you as a performer?

There’s a lot of influences for me (as mentioned before, Shawn Brown being one of em). Andrew Wood from Mother Love Bone for-fucking-sure. A lot of R&B acts too like Jodeci, SWV — thats how I learned where to groove with songs and do special moves at certain key-specific parts of songs. Also some Baltimore artists like Abdu Ali, Butch Dawson, and Kotic Couture for their interaction with the crowd. The whole show is interactive in general, and they make the crowd just straight up lose it whenever they play.

I watched a bunch of videos of David Lee Roth years ago and was like, “Yo, this is the kind of shit I need to be on. Most definitely.” A lot of my stage moves are from him, frankly. Oh man, and those splits I do when I perform, I get all of that shit from Prince. I watched so many cool live videos of him just going straight stupid, and remember thinking that I’d just try it out one time for a show. When I did it, it felt soooo good that it just became my thing that I do. Probably plenty more that I’m gonna regret not thinking about for this, but these are the essentials.

Any advice you would like to instill on other young black people who are trying to navigate their way through punk?

My biggest advice to give is introduce yourself to other black people in your scene and put yourself out there! There’s a whole community with people just like you, so you don’t have to navigate alone. Thats something I didn’t take till later, but I’m glad I did either way. There are so many things I’ve learned from the homies that way, and have played a big role on my growth as well.

Always remember that, like many others, we built this genre, and are the reason that this counter culture exists — move however you want in this shit because you can. Book shows, start a band, make a zine, do whichever! This is your space/scene, too.