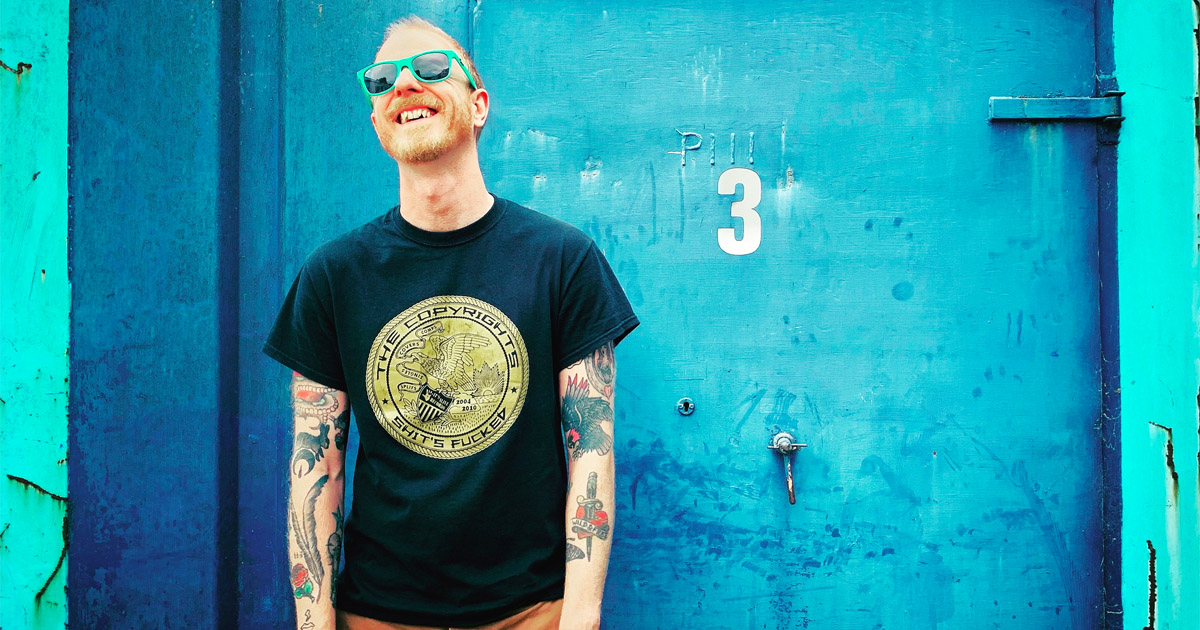 English pop punk troubadour Sam Russo kept his fans waiting five years for his last record, Back to the Party (out now from the comrades at Red Scare). The singer-songwriter’s warm, crackling voice has always been perfect for delivering ballads about living in hard places during hard times, without veering into bleak territory — which in this writer’s opinion is a very appropriate vibe for our times. Russo writes acoustic yet full-bodied tunes that make you feel like you’re there, complete with all-too-relatable themes of struggling to keep love, friendships, and hope alive.

Back to the Party feels, and sounds, so much more rich and complex than you’d think possible for a 33-minute record. It’s definitely his most triumphant to date (and this is coming from someone with a pathological preference for every band’s “early stuff”). Hard Noise is thrilled to bring you a brand new lyric video for “Young Heroes,” a tender and soaring anthem from Back to the Party. I talked with Russo about what the song means for him, how this record came together, and tabletop RPGs.

What’s “Young Heroes” about to you?

Young Heroes is all about staying young and growing wise…

What do you hope listeners take away from it?

I hope the imagery gives you something to relate to. Fond memories, things that shaped you, things you’re hopeful about for the future. I hope the lyrics remind people to keep their own sense of youth alive in their hearts — sleepovers, parties, day dreaming, feeling invincible, monsters, escape, mistakes — all these things we associate with growing up, I hope people remember to carry with them. The real message is in the lyric ‘time heals all wounds, and pride makes old fools of young heroes’.

What was new or different about the making of this record compared to previous ones?

I spent a long time writing this record because I had no interest in rushing something out that I wasn’t happy with. I’m both a slow writer and a passionate music fan, and I know how it feels to listen to a record by someone you love and be disappointed that it sounds rushed or half-arsed. I am not that kind of writer, so I just gave myself room and time to grow the songs. It felt great to say exactly what I meant on this record and it gave me a great sense of satisfaction to have it sound exactly how I wanted it to. I want it to sound and feel like a treasured cassette tape that gets handed around a group of friends on the school bus. That vision took a lot of work to make real!

When I recorded it, I worked with a new engineer (Sam Inglis) and an old friend (JG Harding) as producer, and that dynamic was both really new and really productive. We recorded the whole record in 5 days during a heatwave so it was really intense — it felt like a sweat lodge ritual!

Overall I’d say the whole process was new and different, because every time I record I consciously mix things up with different people and environments so that my sound never stagnates or gives people exactly what they expect. I also experiment a lot with my writing, and I tried everything I could think of to give listeners a feeling of comfort and familiarity while sounding very different to what they might be used to hearing in my music.

What are the highlights on Back to the Party, for you?

“Always Lost” is great fun to sing and I love telling that story. “Corporeal Gloom” has a really cathartic second half and I get really lost in that song. I love how “Darkness” sounds on the record, the piano and strings are really subtle and it just has this vulnerability and honesty that I’m really glad I was able to articulate.

The pedal steel on “Tears” is something I really love too, that was Sam Inglis — he took the song home one night and just came back the next day with the whole pedal steel arrangement recorded. He set it playing and went to make a coffee and when he came back I was just curled up in a ball crying! He broke me with that one.

Lots of highlights! I love this record. I really think it shows everything I’ve got as a songwriter. I gave it everything I had. It’s five years of my life in ten songs, and all of them mean a lot to me.

Recently I had to kill off one of my all-time favourite characters, a guy called Chicken Cooper. He was a mutant goose hobo in a campaign I run called Venice X, and he got shot by a flea cartel while they were trying to kidnap Tony Hawk.

The game is basically a bunch of mutant animals having adventures up and down the California coast, and Chicken Cooper was an NPC ally who did stuff like accidentally burning off all his body hair distracting a reporter while wearing a bra full of rum raisin ice cream. He was great. He sacrificed himself to save the players.

His funeral was at Venice skatepark, it was luau themed and everyone wore Hawaiian tuxedos. A great comrade! (The game is the old Teenage Mutant Ninja Turtles RPG by Palladium if anyone’s interested! I love talking RPG’s on Twitter and Instagram — hit me up!)

What music are you listening to lately? (or, what’s your personal soundtrack for this extra apocalyptic period in time?)

I have been getting into Phoebe Bridgers (who hasn’t?) and I’ve been revisiting Neighborhoods by Blink 182 a lot. It’s got some great tunes tucked away in there. I also recently listened to the whole Copyrights discography in order and had a ton of fun with that! Lots of Dan Andriano jams, some Samiam, a lot of Bad Religion, and to be honest I’ve mostly been listening to these crazy surf rock playlists because I’ve been escaping to deserted beaches most weekends.

I broke my back recently (I’m OK — I can walk and stuff!) so I just walk the beach until I find a good spot then I just lay in the sand listening to surf rock covers of the Twin Peaks score and read post-apocalyptic sci-fi until I pass out. Summer 2020! What a time!