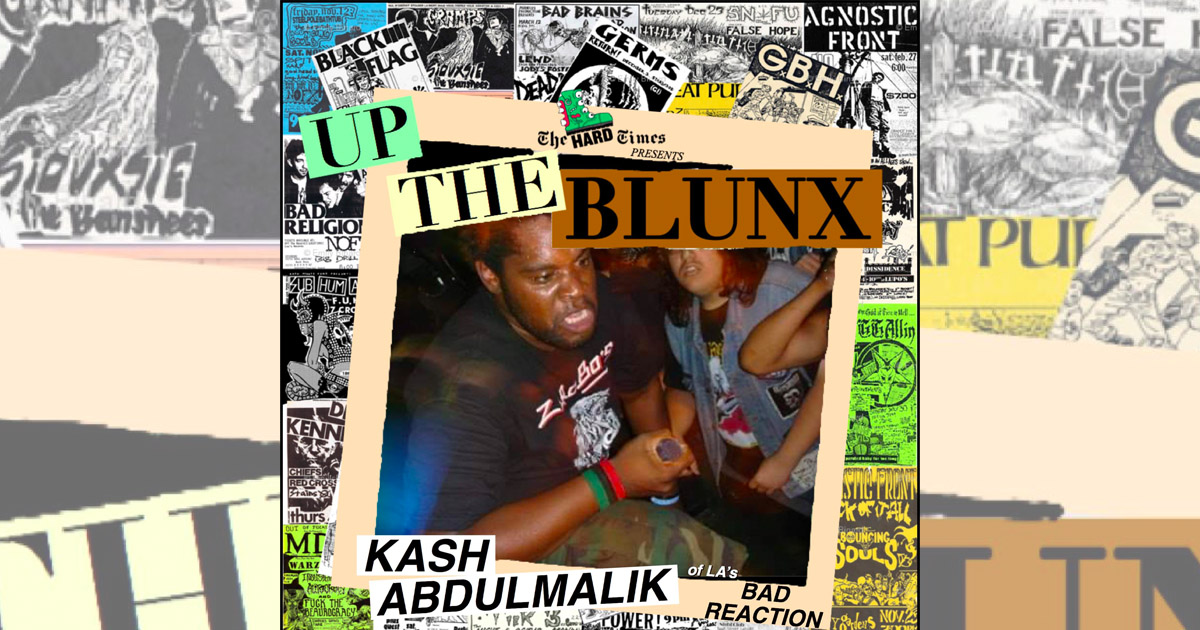 Up the Blunx Featured Artist: Kash Abdulmalik of Bad Reaction

Up the Blunx is a podcast where two black punks from different walks of life get together to voice their opinions on everything from straight edge to condiments to the police. The show, from comedian Kevin Tit and End It frontman Akil Godsey, regularly features music from black artists. In this series, we dig a little deeper into the artists behind the music featured on Up the Blunx. This week’s Q&A is with Kash Abdulmalik of Los Angeles band Bad Reaction, whose song “No Rules” was featured on episode 3.

How old were you when you discovered punk, and what about it appealed to you?

I think it was towards the end of high school. Like junior year. I’m from Brooklyn and grew up very much a hip hop head. I’m dating myself but EPMD, Public Enemy, Nas, Wu Tang, Tribe and De La was all I listened to, and I (jokingly) subscribed to the idea that white dudes with guitars screaming was “some ol devil shit.” So dumb. At that point I was skating a lot with my friend Jason Roman. He introduced me to the Misfits, The Business and a few others. All of a sudden I was like “I like devil shit.”

I’m kidding, but it really did ignite something inside of me. I’m the youngest sibling and my brother had a few problems, so a lot of attention from my family fell on him. I never knew how to project my anger and insecurities about feeling discarded and alone. Then along came hardcore and everything changed for the better. This made sense to me.

How long after that did you find yourself going to shows?

I think it took a week or two. For that first week, I kept feeling like I shouldn’t like this music as much as I did. I was young and it felt like I wasn’t in my lane. I remember listening to Minor Threat on the subway and keeping the volume low so people couldn’t hear what I was listening to and judge me. So crazy. Black folks made rock and roll, so of course it belonged to me.

One day after I got off of work, my buddy Adam Altman gave me a tape to listen to as we were skating. The Bad Brains ROIR tape. I listened to it and was floored. Then I opened up the tape box and saw who the fuck was playing!! Black people??!! They made this?! That was it. I went to my first punk show that night. FEAR, UK Subs and The Turbo AC’s at the Continental off St. Mark’s Place. The next day I started making flyers to put a band together. Talk about a catalyst.

Bad Reaction fucking rips! When did you first start playing in bands and what/who influenced you to do it?

Shit, thanks man! The Bad Brains tape was the biggest influence. I saw a lot of footage of them playing and loved how HR let the music possess him. That’s what I wanted to do. I didn’t just want to perform, but attack the crowd. I wanted to destroy. My first incarnation of a band was with my pals Jason Roman and Matt Straub. I think we practiced four times. Hahaha! After that I had one or two poppier bands in college (One kinda like DFL, one kinda like early NOFX). I was into more poppier punk at that time. I never really separated the Epitaph brand of pop Punk from NYHC like Agnostic Front. Those were my two go-to’s at the time.

David from Warzone is a family friend. My dad was an Imam at a local Masjid and David converted to Islam. Once he learned about my new love affair with punk, he showed me my first bass licks and taught me a lot about hardcore. He was a HUGE inspiration and helped push me out the door. Later that year, I moved to California without ever having been here to start a band. I thought Black Flag is from L.A, what could go wrong? I was very, very lucky cause a lot could have.

Has being black in punk ever led to any particular struggles with your identity?

Dude. Yes. Identity and race. One of my friends who isn’t in the punk scene knows first hand about some of the racist stuff I’ve dealt with over the years. She said, “You must love punk rock a lot to put up with that.” And I really do. I love punk rock. But the issues with identity don’t only come from people saying “You’re one of the good ones,” or “I never seen a black dude like you before” or any of the other insane shit I’ve heard over the years (and I know they meant well, but Jesus Christ).

A lot of issues came with what I felt when I was younger. Am I selling out? Is this MY music? It’s funny because all those insecurities are just waiting in you when you’re young. As I grew older, I stopped tip toeing around those thoughts and I started stomping them out. But that’s what this music is about: “Fuck your self doubt.”

Have you found that some of your experiences in punk have made it easier to transition into the world of comedy?

Fuck yes it has! You need a thick skin to make a career in comedy, and punk gave me one over time for sure. Don’t get me wrong, I’m a sensitive dandelion but I can most certainly take a joke. I wasn’t always as callous to things as I am now, but punk definitely made it that way.

And besides, punks are some of the funniest people I’ve ever met. Damn near after every show I’ve played, I’ll be outside laughing my ass off cause some jackass is cracking me the fuck up. All of the guys in Bad Reaction are fucking hilarious. As are damn near all of the bands we ever played with. But nobody more than me. Clearly.

Any advice you’d like to give young black folks who are trying to navigate their way through punk?

No matter what you hear, no matter what anybody tells you, you BELONG here. This music is yours. Go full force into it and it will help everything you do. Start a band, write a zine, organize a show. And if it’s dope, send me a copy of your record. Hahaha! That’s what’s up.