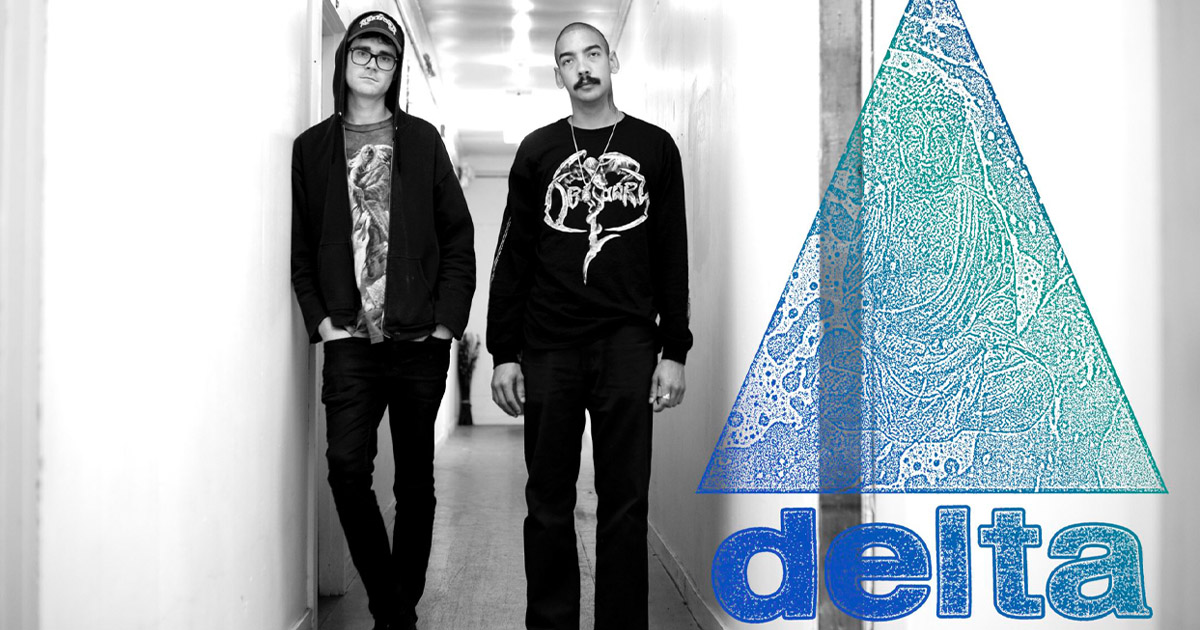 Matt Walker may not be a name that you recognize right off the bat but as a mainstay of the San Francisco punk scene, there’s a pretty damn good chance you’ve seen him play music in San Francisco based punk ‘n’ roll outfit, Culture Abuse. Walker’s project Delta with Kevin McCammon releases their new full length The Height Of Nirvana today (August 14), a record that is– in his own words–“the most insane music rn it sounds like ancient space shit like fucking star wars.” Considering his past works, The Height of Nirvana is a complete departure–  experimental in nature and owing more to  acts like Tapage and 猫シ Corp.

With the release of the full length imminent, we spoke Walker to discuss the origins of Delta, his musical history and his thoughts on experimental music and technique.

[Editor’s Note: Though Matt Walker’s time in Culture Abuse was quite some time ago, Walker and Delta offered a statement regarding the situation with the end of the band. Check that out below]

If memory serves correctly, you and I met at the Culture Abuse release show for Peach in San Francisco around 2016. Was Delta a band during that time or did it exist prior?

The idea for it has been around for a while before that. Kevin, the other member of Delta, and I used to have this tape label that we were doing called Arcane Visions that was mostly focused on releasing black metal and harsh noise. When we launched it, we made this zine that had a compilation CD and that had the first Delta recording on it. We had the concept for the band and were playing around with it, but hadn’t really decided to actively do it at that point.

Something that was really notable to me about listening through the new album, The Height Of Nirvana, is that it’s all instrumental and that’s not the music that I associate you with for the most part, especially being a North Bay guy. When I think of that scene I think of bands like Sabertooth Zombie and Ceremony. Was it intentional in trying to make something that different from your peers and do you even consider bands like that to be your contemporaries?

Yes and no. The goal wasn’t necessarily to do something just to be different– but we wanted to fill an occupied space. I don’t really know of any other bands that I would consider contemporaries now. Our music originally was a lot more metal oriented and Sunn O))) worship– that was kind of the idea for the band, we’re into Sunn O))), Earth and Boris. I just thought to myself “Is anyone doing that?” That was really just the whole idea, we were getting into more experimental stuff and wanted to have a band that was bound by genre.

Would you be able to walk me through the setup of your equipment and how you do a live show?

We started out with the idea of wanting explore the relationship between guitars and synthesizers in a “drone.” We did this demo years ago that definitely laid the foundation for what we were trying to do– Kevin was playing guitar and I was doing something with a synthesizer, I think it was a microKORG. By the time we actually went into the studio, Kevin had got more into the synthesizer stuff– modular synthesis, Eurorack specifically. Then I started playing guitar and that was sort of the foundation of the sound now.

We developed new influences and started including percussion a little more, which lead to our last album Starseed. World music and finding sounds outside of typical rock or metal or whatever started to be more of an influence. The last couple shows we played before everything was shut down with Covid-19 we’d both have these ceramic drums while Kevin has all his synthesizers and then I’ll be on guitar. A lot of my tone does come from pedals, so in the past I haven’t been too picky about amps but I’d like to get away from the big pedalboard going forward. Kevin’s synthesizer stuff is always directly plugged into the PA. The last couple shows we played were with Kevin on Roland Wind Synth– an electronic flute to replicate some of the sounds on the last record. The goal is just to get the live sound to match the studio but there’s so many limitations.

Do you see parallels with the hardcore scene and the experience you’ve had with Delta and experimental music?

I had to relearn my whole approach to doing a band. Everything we do has been pretty different. As far as parallels from previous experiences, the only thing that really carried over was what I had learned being in studios in the past.  I guess I thought that it would be easier, to be honest, to come from [hardcore] and be taken seriously.

The last Delta album, Starseed, was released in January. That is quite a quick turn around in terms of output.

Yeah, that’s been more of a more recent effort. Starseed had actually been recorded around a year before that and I was hoping that I could maybe get a label to pick it up but that never happened– we ended up self-releasing. It’s not that I have a problem with self releasing, it’s just easier when someone helps you with it. You don’t have to worry about every little detail.

Walk me through your entire life history of bands.

My first band was when I was in high school– a hardcore band called Between Ships. That was my first experience really trying to be in a band and being more serious as a musician. That was also when there was still a hardcore scene in the North Bay. There was a venue (kind of) and people still had house shows and it felt like things were happening. I wanted to be involved and seeing Ceremony get bigger outside of our area and expand musically really made me understand what’s possible. That band was when I got to play outside of our hometown for the first time. We’d play Monday nights at Submission in San Francisco. After that ended I didn’t really a steady band for a while and a couple years after that Kevin and I were living together and that was when we started doing Arcane Visions in 2013.

We also had another band that was more of a psychedelic rock/stoner kind of band called the Blue Sunshine Family Band. It was, and has been, an on-and-off thing for years– we never fully got it together with that band but we haven’t entirely called it quits either. Like Delta, the Blue Sunshine Family Band was also instrumental and we would get a lot of people saying that we’d be better with a singer–  almost as if it wasn’t an artistic choice. At some point during all of that was when I joined Culture Abuse.

How long were you with them?

That time of my life is kind of a blur now, but only a year and a half or two.  I wasn’t there at the beginning and I really wasn’t around that for long in the grand scheme. But I was around when it really kind of started to take off for them. That was interesting and I think that’s why I didn’t last too long because that period for any band is usually the most grueling. I don’t know, it’s hard to remember the timeline of that.

So going back to the North Bay scene and really the Bay Area scene at large,  I’ve always felt like it was just overwhelmingly white. Did you ever feel off put by that in any way?

Yes and no. That is not an inaccurate observation and I think in general there haven’t been a whole lot of people of color in bands coming from here. It never really felt weird to me until I started exposing myself to other area scenes but that’s just kind of how it is growing up around here in Santa Rosa. There is just a lot of white people. I was lucky to grow up there since most of the time racism wasn’t really something people had to think about.

As far as the experience has been with Delta, all I can really say about that is I’ve heard a lot of people in the music industry say that they’re bored with bands full of white guys playing guitar, but I still see quite a bit of that coming out.

So any plans for a release show or tour for when Covid 19 relaxes?

I think probably by the time that people are able to have shows again I hope that we’ll have released more material, so the idea of a release show is probably not really something that we’re going to worry about.

I do want to do some video performances. A lot of bands are trying to do live stream stuff and don’t get me wrong, it’s great and I think it’s really cool that people are trying to adapt in any way they can. I would rather make a video, or just film a live set so that it can exist forever and not just be this thing that you have to tune in at a certain time to see. I do think if you can’t be there and really feel the music it’s important to try and do other things to make it interesting and make it an experience. I wouldn’t call it a music video necessarily because I want it to be more like a concert short film, where you can see in more detail a band performing but then at the same time have different visual things going on in other shots. Still I think the barrier is just a matter of money and equipment.

A statement from Matt Walker:

I just wanted to mention the Culture Abuse situation. With the news coming out about a lot of things, I haven’t spoken up because I don’t necessarily see it as my place.

I feel like as men, we have a responsibility to keep each other in check and make sure that no one is being a creep, and that doesn’t always happen. I hope that people are learning from all this. I’ve been thinking a lot about my past involvement in things, and how I maybe could have made a positive change. It’s causing a lot of reflection and I hope that that is happening to everyone. I’m still learning a lot right now and don’t want to be the person who jumps on the podium just to say something, and it has been so long since I was in the band. I didn’t want to come at anybody and am not looking for anything. I think there are more important voices to be elevated right now. Those voices need to be heard.

Since I was involved with the band at one point, I want to make it clear for Delta as a band, that we stand with survivors, and I’d like to invite anyone to reach out to me if they feel inclined to discuss anything. Thanks again for sitting down with me. ॐ