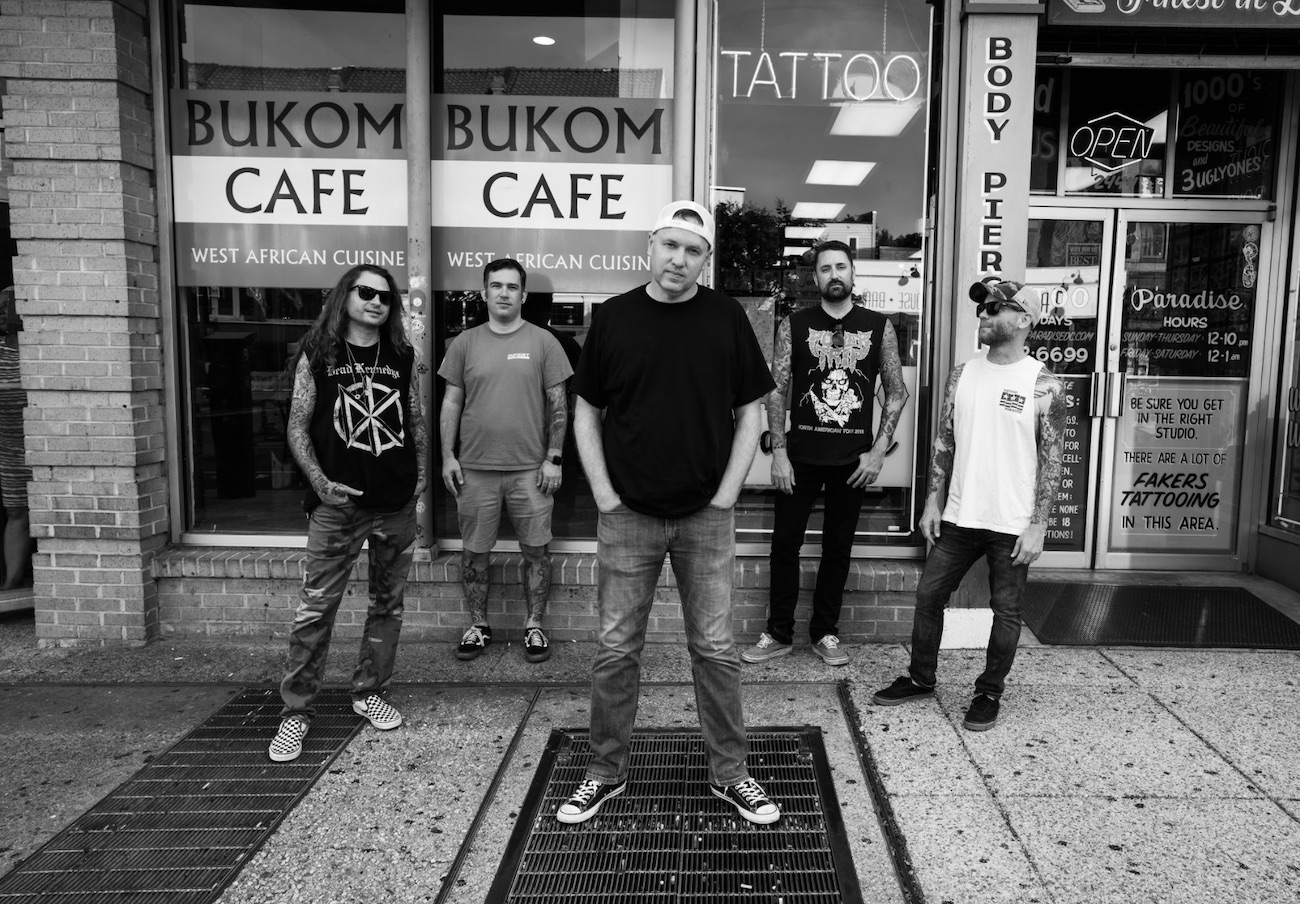 Be Well features an impressive lineup of guys who have done time in bands like Darkest Hour, Bane, Converge, Fairweather and more, but what might be the most fascinating is their frontman Brian McTernan. A renowned producer in his own right, McTernan first came onto the hardcore scene via the much beloved DC hardcore band Battery, who released the We Won’t Fall 7″ via Lost & Found Records in 1993 before quietly morphing into Worlds Collide with McTernan’s exit and Zac Burger’s entry on vocals.

Yet with the release of We Won’t Fall, Europe had developed a ravenous appetite for Battery, and the band returned with more material before calling it quits in 1997. A pair of reunions followed in 2012 and 2017 but aside from that, McTernan’s vocals have been sorely missed on the scene.

The Weight and the Cost is Be Well’s debut LP due via Equal Vision on August 21, and the first project for McTernan on vocals since 1997. With that in mind, Hard Noise talked to McTernan about the genesis of the project, the end of Battery and what he hopes fans will gain from the music of Be Well.

So in 2017, you decide to get Battery started again which is really interesting. Where did that come from?

People have asked us to do a lot of things over the years and it wasn’t something that we wanted to do — there were some relationships in the band that ended on not the best terms. We did the Revelation 25 thing and it was amazing but Graham, our bass player, wasn’t able to come out because he’s living in Sweden and at that point Ken and I weren’t really talking that much. So it didn’t feel like great — we did it, and it was good, but it wasn’t like “I want to do this shit all the time.”

One night, Jason Hamacher (Battery, Frodus, etc) came up to have dinner in Baltimore and told me that Battery had gotten an offer to do Damage City in DC, Revelation 30 and this really cool festival in Europe. Revelation was such a big part of my life growing up and between all of the cool offers it felt like if there was a time to do it, maybe now would be the time. So we took a different approach — Ken and I got a coffee and talked about a lot of stuff that we probably needed to talk out. It was really good and we decided to do it and it was fun. It was a great time.

Battery’s history is so interesting, how you guys became a thing in Europe after a record on Lost & Found which, to this day, I am not entirely sure did legitimate records except for a handful of occasions…

Well, what I don’t know with Lost & Found is how much of that stuff was actually bootlegs and how much of that stuff was like one dude in the band that got a check and told them, “go ahead and press it.” The one thing that was interesting about Lost & Found, we never got paid anything from them ever but they really did push the band. The two bands that were like actually new bands on the label were Battery and Ignite and they really did a pretty amazing job promoting the band. We had a pretty magical run over there.

So how did Be Well come about?

Battery did that new song “My Last Breath” — one day, I woke up and Ken had sent me a song idea. I hadn’t written lyrics in 20 years but I sat down at like six o’clock in the morning and wrote all the words for the song in like five minutes. And it felt so good. From when Battery broke up and back to my earliest memory, all I did was write. Lately, I was producing other band’s records, so I just kind of shut that part of myself off. So it was cool to do it and then record a song and sing again and I realized “wow, I really missed this.” The shows were some of the best experiences of my life.  So after those dates were over, I felt like “I don’t want to give this up again.” So I started writing and made a commitment to myself to try and do something creative every day. I felt like I need to keep that part of myself sharp and alive.

So I was writing and feeling inspired but musically and lyrically, Ken and I were just not on the same page. He was sending me ideas that I thought were good but just weren’t what I wanted to do, and I think I was writing things that he didn’t want to do either. I just kind of felt like the world doesn’t need another Battery record, unless it’s going to be amazing — that would have been forced. Ultimately Mike Schleibaum, who was also playing in Battery, and I decided to do something new, which was Be Well.

So a lot of the initial song ideas for Be Well were written in 2017 when we were still doing the Battery stuff. Mike and I spent a little bit over a year jamming with different people, trying to find the right members. It took a long time to find people that felt like they were like the right fit musically and kind of like were in similar places in their life.

So it didn’t fully come together until summer 2019 when Battery did a tour with H2O. Aaron Dahlback from Bane moved to Maryland and Mike sent him the demos we had been working on and he loved it. When we got back from the Battery tour, Mike sent it to Shane Johnson and Peter Tsouras (both from Fairweather), our guitar player and drummer, and they were into it. So we had our first full band practice with all the people, like a week after we got home. It all kind of fell into place from there.

When did you record the LP?

Well, we kind of recorded it twice. Before we found the members of the band, we actually recorded the whole record, which was me, Mike, and we hired a studio drummer. I hated the record.

Did you play anything on it besides singing it?

I contributed some stuff on it. But on the initial one, we hired a studio drummer and it was too perfect. The thing about hardcore is it’s gotta swing a little bit and it felt just a little too stiff for me. So actually the week before we went on the Battery tour, Andrew Black, who was playing drums on that tour was in town. I went into the studio with him and tracked like six or seven songs to just see if it would feel better and he fucking killed it. So actually Andrew Black, who was in The Explosion and Good Clean Fun, played drums on seven of the songs on the album. Shane joined the band later, and he played drums on the other four.

A lot of the content surrounding this record, and you’re very forthcoming about it, is about fighting mental illness and depression and anxiety. I feel like now everyone’s very open and honest about it and there’s zero stigma attached to it at this point. Were there older bands that you connected to that were based around some of these ideas that maybe like inspired you to write?

With hardcore, there are different things that I connected to for different reasons. I loved all of the early DC stuff, like Rites of Spring, because I loved how abstract but also relatable and personal the lyrics were. It was a broad enough palette that I was able to find myself in that. With Embrace it was a kind of the opposite in the sense where it was really specific and really clear exactly what he was saying and what the songs were about. For me, I kind of always straddled the fence between the two lyrically, where it’s a little bit abstract and also highly specific.

7 Seconds was a huge kind of inspiration for me lyrically too. But it’s not always people singing about depression or anxiety that inspired me. It was just emotional music I really connected to. I loved Gorilla Biscuits and Agnostic Front for different reasons. I listened to a lot of Elliot Smith, who is a big influence on me. I was writing what I was feeling and it kind of ended up coming out the way that it came out. I think it’s cool. I’m a really private person, so it’s funny that I could feel more comfortable putting it out in a song as opposed to sitting down with a friend and talking to them about it.

What do you hope people will take away from this record?

I think that it’s going to be totally different for different people. We’ve all played for a long time. We’ve all written songs for a long time and none of us ever stopped playing. So it’s pretty powerful and catchy and fun to listen to. From the reaction we’ve gotten from people, I feel like people are definitely finding things that they’re able to relate to, lyrically. And I think what’s cool about it is there’s a lot of mental health stuff there I don’t feel like you need to have suffered major traumas or severe depression or severe anxiety to appreciate it.

I feel like everybody has had disappointment, pain and loss. Everybody has things about themselves that they wish were different, or make them fearful of sharing with other people. And the hope is that people are able to find pieces of themselves in the music, in the same way that I have always found pieces of myself in other’s music.