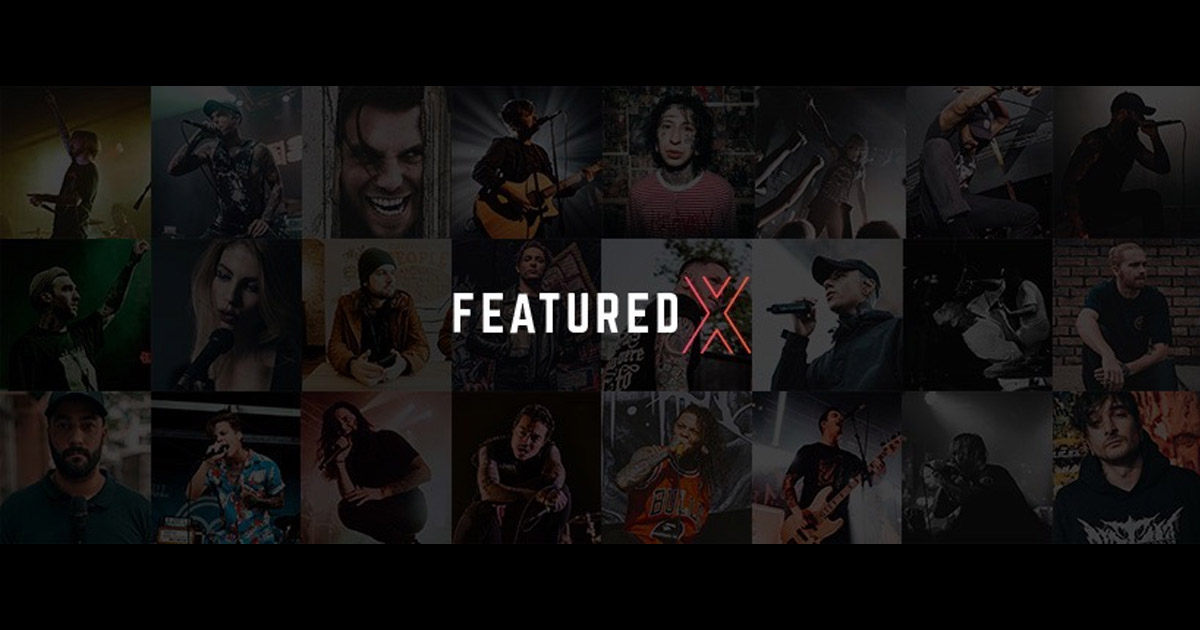 Technology is constantly changing the way musicians collaborate. In a simpler way, it’s democratized connection. Bands can fire ideas across the internet to write or even fully produce an album without ever being in the same room (which is especially useful during a pandemic). But social media can be notoriously unreliable. When it’s not slowly devouring your mental health, you might miss a critical tweet or DM and lose out on a potential collaboration. It’s from this uncertainty that Jeff Menig came up with the idea for Featured X — like Cameo, but for booking guest recording artists.

The one-time manager for nu-metalcore pioneers Sworn In (and current Marketing Director for Atlanta’s Masquerade venue) brought up the idea to longtime friend Ryan “Tuck” O’Leary, bassist/vocalist for metalcore band Fit for a King. The latter’s friendships combined with Menig’s idea and marketing know-how, then were elevated by web designer Adam Pickney, who moonlights as guitarist of Artessa.

We caught up with O’Leary to discuss where Featured X came from, how it’s been going, and plans for the future. Answers have been edited for clarity and length.

Tuck O’Leary: Yeah, we’re just trying to make a splash. We broke the scene internet for a few hours and had everybody seeing Featured X posts and asking what the fuck it was. In the first two days after it, I think I acquired like 25 new people; we received a ton of applications, which was great. And this week we just dropped like 40 new people and we’re up around like 101-102 artists now on the site [up to 157 at press time], including some pretty sick ones like Tyler Carter and AJ [Rebollo] from Issues and Alex Koehler, formerly of Chelsea Grin — bunch of really cool fucking artists on this week, so I’m stoked. We’re also starting to highlight some younger artists whose bands might not be huge, but I think their bands are really good, and they would be an asset to people’s music.

It’s almost like Uber or one of those things, where it takes modern tech and it fills a niche because, let’s be real, taxi cabs are kind of an old fashioned thing. And so is the old way of getting guest vocals where you have to just cold call someone.

I agree fully. I pretty much only use Ubers, unless I have to. It’s kind of nice because all these people don’t want to have to deal with the red tape and the management and labels and all this shit, so I just do it already and then it’s taken care of. Some guys are a little more specific where we’re trying to get more artists to value publishing and masters — and if they’re singing on a song, they do deserve 5-10%, maybe more depending on how they write — so that’s one thing that will be a little new for some of the smaller bands, because they’ve never dealt with a lawyer before. But it’ll be a good learning experience for everyone, and help independent artists to run their businesses a little smoother.

You’ve done a few vocal features before, and some of the folks reading this might not understand how a band typically gets a guest vocal feature. Could you share some insights as to your experience with getting asked to do (or asking for) guest spots?

The ones that I’ve done, generally a lot of people have been friends, and I’ve done people from local bands from my area that I grew up in that I wanted to support, stuff like that. Usually they can just slide in my DMs and I see it, and I’m like, ‘Well, they’re my friends, of course, give me a couple hundred bucks and, shit, let’s do it.’ No biggie. Or you do it for free because you really like them. When it comes to trying to get, say someone like Ryan [Kirby, Fit for a King] now, you can slide into his DMs and hope that he sees it, and he’s very receptive. We don’t have as much red tape to go through as a lot of other artists. Our label really lets us do what we want and use our best judgment, and as long as we don’t sing on anything that’s bad for our image, it’s ok.

When it comes to getting someone like Jake Luhrs [August Burns Red] or Mattie Montgomery [For Today], they’re our friends, so that helps. On top of that, there’s not as much red tape to go through because people are like, well, this is also pretty good for the artists, up-and-coming young band, let’s let them be on the song, it’s not a big deal. But when it comes to a local band trying to book Levi Benton or Ryan, it’s difficult because you have to go through the DMs, you have to speak to management, that artist is supposed to either understand their contract well enough or clear it with the label and then can sing on it. It is a process.

The reality is, even with this business, I’m waiting in people’s DMs, and even with that blue checkmark, you wait a long time. Sometimes people get back to you, and sometimes they don’t. Sometimes people leave you on read. Sometimes they’re not interested. But this is a cool way because now, instead, you’re hitting people with the music right away and not so much chitchat. You’re sending them the song, you’re sending them your social media links. That person logs into the profile, listens to the song, checks it out, and if they like it, they approve it and go with it. And so far, it’s been pretty successful. Out of the 14 requests we received this week, four of them were accepted, and not everything else has been rejected yet either, so we’re not saying that everyone else got the bone. It’s been a really nice way to just focus on the music and to think about, ‘Hey, is this something that I want my voice on?’

How do you choose the artists you work with? It seems to be a decently diverse group.

I’m doing my best to prioritize having it be an equal playing field for everyone. The reality is for every woman I approach who turns me down, I have 50 males to choose from. I have so many more options, and it’s not that I’m not doing my best, it’s just slower. But this drop definitely had a lot more diversity to it. I’m trying to always incorporate as many different people as I can. I just want the best musicians on the planet and have no bias toward anybody. I think we’re doing a good job so far. I’ve gotten some of the more popular people in each of their respective demographics.

It’s also not a game. I’m not trying to pick up someone because it’s like, “Hey, you’re fucking different than everybody else. Will you be on my website?” That’s such a prick thing to do. I’m just trying to have fun and work with my friends and with people that are really talented and can continue to support the music community — and help to pay some bills and sing on some good music while we’re at it. The whole goal of this thing is there is that band out there that is going to pay the money and is going to have Tyler Carter [Issues] sing on a song.

I remember seeing something about co-writing with Featured x. What’s going on with that?

It is coming soon. We’ve had a lot of the artists who are very interested in doing co-writes and ghost writing and all that kind of stuff. I also really want to add other instruments. I want to have anything from a guitar solo to the violinist of Yellowcard on the site. I have a lot of ideas or hopes for expansion in the future, but the co-writing and ghostwriting section is 1000% coming because I think a lot of people want that and want to have the opportunity to, not just have their favorite artists sing on a song, but actually give them proper feedback and be like, “Hey, let’s chop this up, let’s move this chorus here and let’s switch up the bridge.”

That’s what’s going to make this music really start to get good and really help bands to progress and get better. I have guys that are specifically more interested in that for instance, like Bobby from Fit for a King, he really wants to do that. I’m excited to add that feature and have that going. It’s just this idea really hasn’t even been birthed for that long and we’ve gotten as much accomplished in the time that we did. It’s nice to have plans for the future, and if anyone that reads this goes and tries to beat us to it, I’ll fucking kill you! (Laughs)

On top of being busy, the real reason why we haven’t added it to is that when you’re doing co-writing, it involves publishing and masters, so we can’t do it until we have a legal division, which we are working on. Luckily, we have two really amazing lawyers who love the project to work with very relevant bands who would like to get involved, so we’re just finding a term of agreement between us and them. Once I have that, not only are we going to be able to do the co-writes, publishing and masters, and be able to really have that be a smooth process for everyone, but I will have in-house representation for every single artist that doesn’t have a lawyer.

We’ve kind of danced around this the whole interview, but what is your ultimate goal for Featured X?

My goal with Featured X is to accomplish a few things. I want to support the artist at a time when we don’t have many large avenues to support our lifestyle or our homes or pay our rent or to live. We don’t know when we’re going to get to come back, and from the news that I get regularly, it’s not looking very good. So first and foremost, my concern was taking care of my friends and making sure that my friends are okay.

After that, I want to support really good up-and-coming bands. One of my favorite things in the whole universe is music, and if I can help to connect some people who can make better music because they know each other, hopefully make their career happen, or get a record deal, or go on a tour, or whatever. Whether it happens to be big or small, if it helps, then that’s awesome to me. If I can continue to listen to good music, and my friends are happy, and they’re doing okay, that’s what it’s all about to me, man.

That’s awesome! If there’s anything else you want to say about Featured X, the floor is yours.