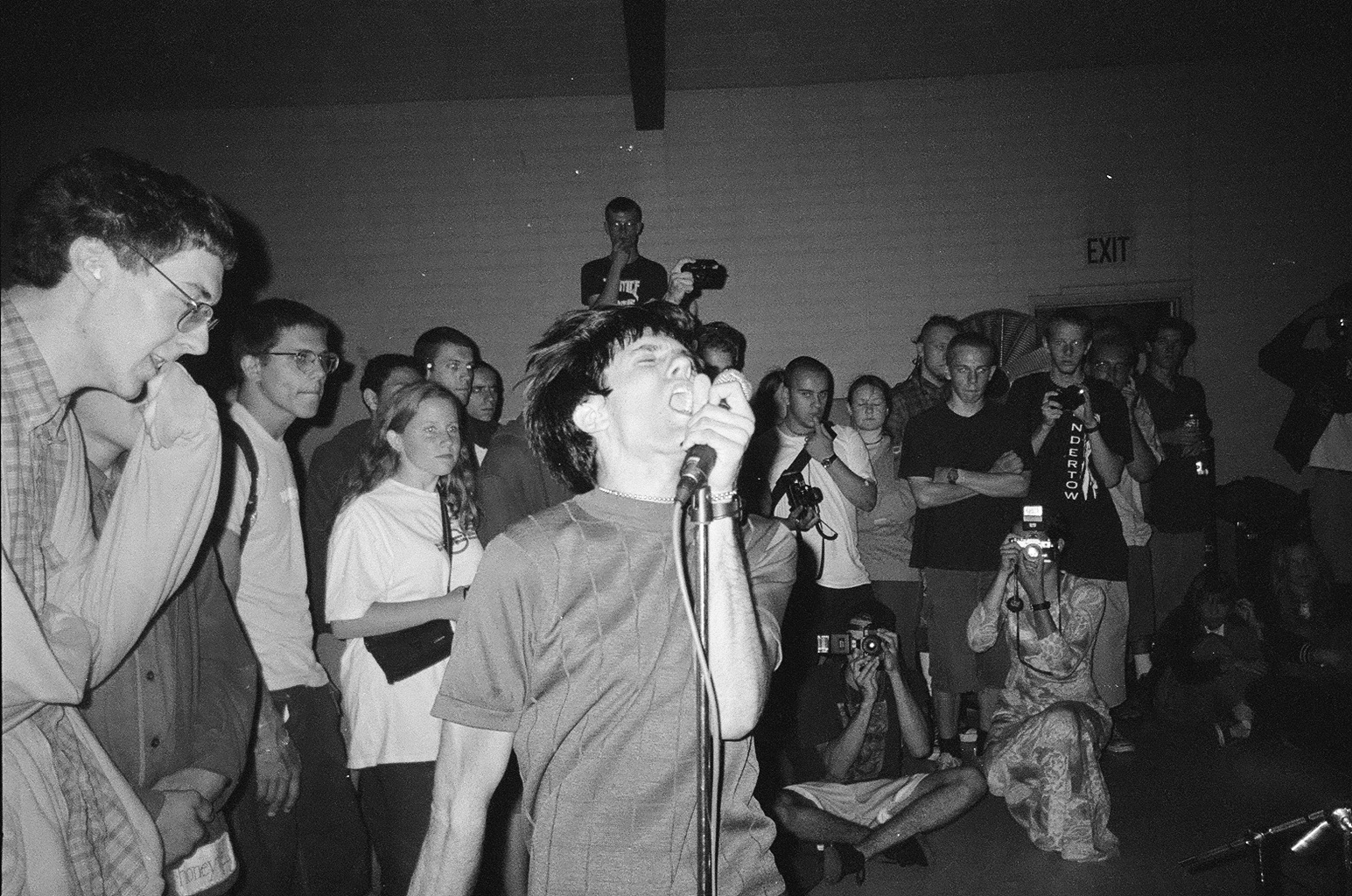 Justin Pearson on Dead Cross, the Locust, Swing Kids and His Dream Collaborators

Justin Pearson is nothing less than a Southern California hardcore hero. Between his Three One G imprint and projects like Swing Kids, Some Girls, Planet B, The Locust, Dead Cross, RETOX and more, the legendary frontman and punk musician has consistently released wildly unhinged material that kept one foot in the hardcore punk realm while the other explored grind, noise, deathrock and any all forms of aggressive music. For those of you counting at home, that’s pushing 30 years of bands that changed the boundaries of subculture.

At the start of 2020, Pearson was gearing up to do dates with The Locust, work on material with Dead Cross and Deaf Club, and tour as much as possible before the Coronavirus brought the entirety of music to a halt.  With that in mind, we checked in with Pearson about his new Swing Kids reissue, the current status of some of his bands and who the notorious collaborator would love to work with in the future.

Hard Noise: Let’s start off by discussing the repercussions of the Coronavirus shutdown on you.

Justin Pearson: I had four tours that were canceled, including the Locust tour which was a huge bummer. Not to mention getting stuck with all of that merch was pretty shitty. But, I’ve just been recording a ton. So if and when everything opens back up, I’ll just be plowing records out left and right. I’m still working on this Dead Cross album, this Deaf Club LP is done and then I started working on this project called Satanic Planet which features Dave Lombardo on it, and that record is getting mixed right now.

So let’s start with the reissue of the Swing Kids stuff. How did that come about?

I think that running an independent label that puts out weird shit is obviously hard. I can see what sells and as much as I am aware of that, I would rather put out new stuff, but like there’s no money. That said, I realized that all of this Swing Kids vinyl has been out of print for years, so I thought “maybe I should just do one LP with everything.” After we broke up and after Eric Allen passed away, we recorded two other songs with our second guitar player, Jimmy Lavelle, and then released a single and you know, that was fine. I think a lot of people didn’t even know about that.

So I had this idea, “let’s just remaster everything.” I had it mastered and I had probably been sitting on the mastered album for at least a year, maybe two years, and just never had enough money to do it — not that I have enough money right now. I definitely don’t. But I was like “okay,  this is going to sell, it’s the back catalog that people associate Three One G with” aside from a handful of other bands. So I put it into production, and it’s weird because I only pressed 500 thinking like hopefully I’ll sell, but the preorders have been better than I thought.

So have you been in San Diego this whole time? Did you participate in any of the George Floyd protests?

I’ve been going to LA once a week to record the Deaf Club record but for the most part, I haven’t gone anywhere else. I don’t think I would fly anywhere. The protests have been insane in Southern California. I’ve been going to a lot of them, actually. It’s weird because at the end of the day, you’re going out in the middle of pandemic. But it’s civil unrest. It’s not a simple thing. I’ve been going to a ton of protests, as many as I can.

I went to one last weekend because these younger women of color have been putting on these protests in this area called Santee, which is nicknamed “Klan Tee” because there was a dude with a Klan hood shopping at a Von’s grocery store. It’s pretty gnarly out there. So these women have this march scheduled for social justice and women of color. So all these things are totally important, but do I need to go out? No, I don’t need to. But should I? Yes, I should. I think that the more people that show up in support — it makes a statement.

There are also these counter-protesters, like this white supremacist organization called Defend East County, who have been super fucked up and fighting people. They’ve made threats online about how they’re going to “have this big surprise” for protesters and I’m like “this is gnarly.” They’ve even canceled protests because of this organization. So in a lot of ways it seems like people should get out there and show support.  We can’t let them outnumber us. It’s a peaceful march about equality and justice.

What do you listen to for comfort?

Man. That’s interesting. Well, to be honest, I prefer silence because when I listen to music I can’t necessarily listen without trying to study it. Regardless of what I’m listening to, I’m going to start studying it, listening to the patterns and the individual instrumentation. That’s where my mind goes.

Is there anything that you don’t try to dissect? Ambient music or jazz or something that might be a little bit out of your normal wheelhouse?

Yeah, I just recently got the sunn 0))) record, “Life Metal.” You can study it and I’m still trying to figure out each of the two guitars happening, but you do get lost in it eventually. So that did happen to me. It’s not a criticism of that band whatsoever — it’s nice. I think percussively mainly, so I’m usually concentrating on the beat and since there’s no drums, it’s a little bit easier. But yeah, I put on “A Love Supreme” by Coltrane the other day which is something that I love as well.

Luckily we got all the music tracked right before the pandemic. When we were recording, Mike Crane and Ross Robinson got really sick so I thought for sure I was going to get sick. Coronavirus was a thing but it being on a full-on pandemic level wasn’t, yet. In retrospect, it turned out that Crane actually had it. So, I thought I got it but I was negative.

In the last month or so, Mike Patton has been working on the lyrics and vocals. Patton is also geared up on having me sing on the record as well. He keeps saying how we have two singers and that we should utilize that because not every band does. That is flattering to hear from him, but I don’t consider myself a singer like him. So I’ve been writing lyrics and recording some vocals and I’m trying to figure out how we’re going to do it.

You’ve done a lot of collaborations over the years. Who are some people that you would like to do stuff with?

I’m a huge fan of drummers more than anything else. So one of the things that’s been brought up every now and then over the years was doing something with Zach Hill. I think that the guy is certainly an insanely rad drummer and a fucking cool ass dude. Another one of my favorite drummers is Mario Rubacalba. I would love to do something with that guy. He’s from San Diego and can play in anything and it’s amazing to me. I’d love to do something with John Syverson from Daughters. Or Metz — the whole fucking band is ripping.

I’m open to anything. I think the only thing that would like make me hesitant to working with someone is if the music wasn’t sort of abrasive? I just don’t think that I’m capable of being a part of something that doesn’t have an element of aggression to it.