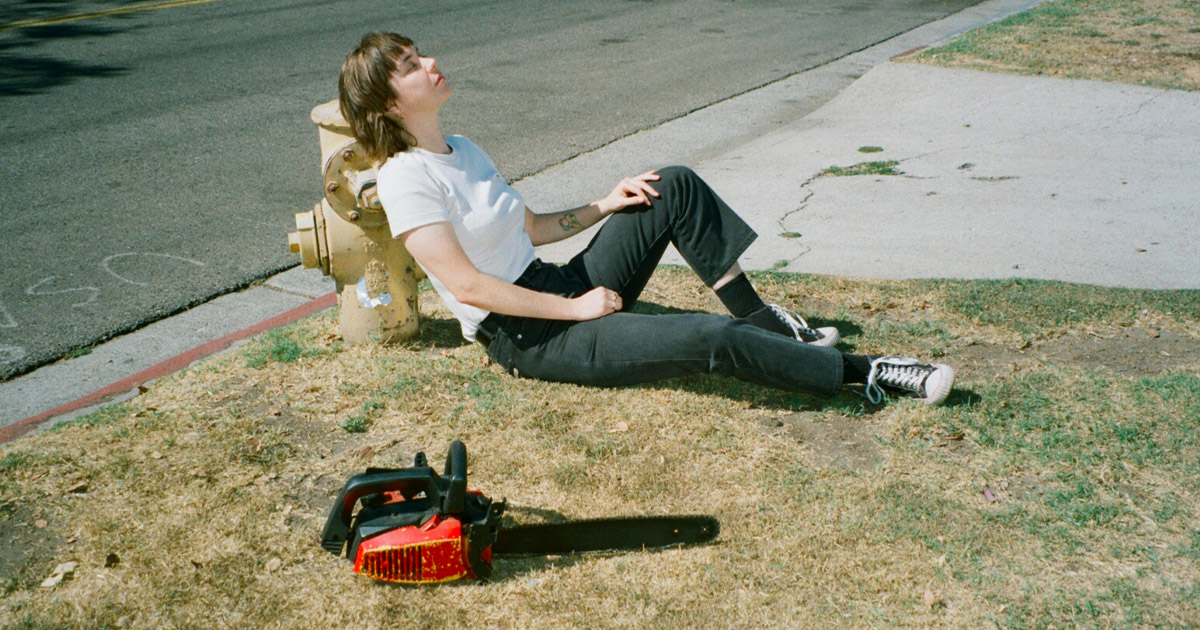 What New Zealander composer Emily Edrosa calls “guitar music” is seriously robust in honesty and realism. Her forthcoming album Another Wave Is Coming (Park the Van Records) is her transition record from being in a band to working solo. Lyrics exhibiting a lilt of playful sardonicism melded with bright and mesmerizing instrumentals — along with punchy rhythm and the exact right amount of fuzz — results in both a mastery of her own story and a gift of universality for listeners.

Hard Noise is excited to bring you the video premiere for “Wade Thru,” a track that bounces along the fringes of psychedelia and garage rock. Read on for our Q&A with Edrosa, where the multi-instrumentalist discusses perceptions of isolation and the difficulty of change — themes of the album set to be released on November 20.

Hard Noise: What does “Wade Thru” mean to you?

What was it like producing Another Wave Is Coming in two different continents?

Well, I really liked it at first. When I started doing the record in New Zealand, I was just doing it all on my own. And I really liked that freedom. Because, before, I was kind of working with a band, and the band would go and rehearse, and then you’d get tight, and then you’d go and record it. Whereas the way I wrote this record was recording it as I was writing, which was kind of cool because you can try different stuff. So, I really liked being able to write a song and immediately hear it back and being like ‘what if this was here?’ and being able to move stuff around on the timeline.

By the end, I did find it hard working without collaborators. If you’re at a crossroads and you don’t know where to go, or if you suddenly decide that something sucks — which, it always has the potential to suck — if you’re working with somebody else they can just be like, ‘no, keep going, it’s good.’ I don’t know, I really miss that. ‘Cause if you’re working on your own, you have to send it to somebody else and be like ‘I don’t know, what do you think of this?’ And they might be busy. I always feel rude expecting somebody to take time out of their day to give me their opinion. And their opinion is gonna be ‘it’s good,’ ‘cause they’re not involved, they’re not gonna be rude about it. I guess I just miss collaborating.

Considering the power of your lyrics, did you find freedom in writing this record?

Yeah. I think I did. I wrote most of the lyrics when I’d just moved here [to LA]. It was a really lonely time and I felt really, really isolated, which is kind of funny now considering all of this. So, yeah, it was cathartic to write the lyrics, more than it has been in the past for me. It was kind of more for myself.

Speaking to a theme of Another Wave Is Coming, has this pandemic affected your view of isolation?

Yeah. I mean, I felt pretty isolated living here, but it’s taken it to a new level, for sure. I live with my partner and she just went away for over a month. And we have our own house here, so I was completely on my own for a month. That was pretty intense. I kind of liked it, though. I always feel like I see people and I feel like an asshole myself, like ‘oh, I’m thriving in the pandemic.’ Because it’s simply not true. My prefrontal cortex is just over it. I haven’t been able to be creative at all, which is what an artist ideally would be doing at this time. But there are some things about it, when I was on my own completely, you kind of do grow or something.

It is funny to put out this record now, firstly because of the title. Another Wave Is Coming. Because everyone’s always talking about the ‘second wave.’ Which I didn’t know about when I called it that. And also how isolated I was, and how the whole album is about isolation and loneliness.

Is the idea of change exciting to you, especially faced with less than ideal dispositions?

I struggle with change a lot, actually. To the point where it’s affected relationships in my life. I’m a Taurus, and I don’t know. I fucking hate blaming shit on star signs. It’s silly to think that you don’t have any free will or you’re not able to change. I do struggle with change a lot, that’s probably why I like this record. I was struggling a lot moving here because it’s so different than Auckland where I grew up, where I had a music community and a bunch of friends. I think you can hear I was struggling with the change. But, to actually move here and take that gamble or whatever, I was drawn to it. Just like part of the title.

Change is very difficult. I’m not somebody who’s gonna jump on a horse and run away from their life. I have to really think about it. It’s something I wanna get better at. I think it got to the point where I spent too long on this record, ‘cause I didn’t wanna have the change in my life of not working on this record. I can definitely stagnate as a person. But change is good.

Pre-order Another Wave is Coming here!