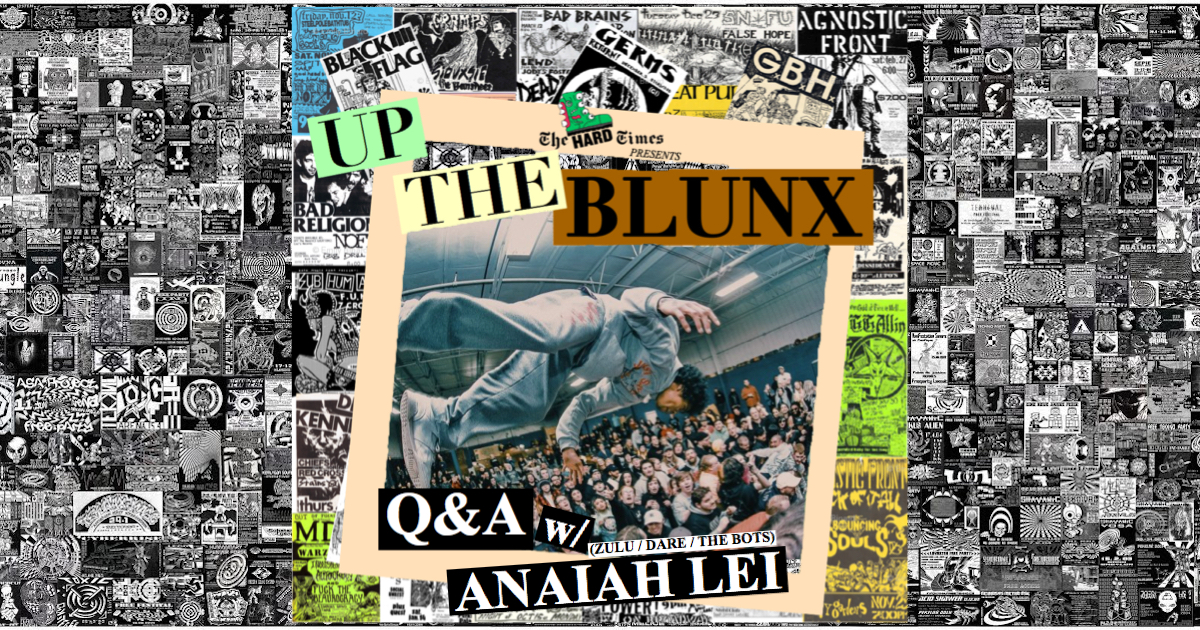 Up the Blunx Featured Artist: Anaiah Lei of Zulu, DARE, The Bots

Up the Blunx is a podcast where two Black punks from different walks of life get together to voice their opinions on everything from straight edge to condiments to the police. The show, from comedian Kevin Tit and End It frontman Akil Godsey, regularly features music from Black artists. In this series, we dig a little deeper into the artists behind the music featured on Up the Blunx. This week’s Q&A is with Anaiah Lei of Los Angeles powerviolence band Zulu, whose song “Do Tha Right Thing (And Stop Frontin’)” off latest album My People…Hold On was featured on episode 6.

This new record is black as hell and it fucking rips! Can you give a brief history of ZULU?

Thank you so much heck yeah, definitely black as heck! So I had this idea of singing for a band for a long time and I always wanted to do an all black project as well. Zaine, who plays bass, hit me with the idea years ago and at the time I was so busy with this other band I was in, so I couldn’t jump on it. Got together a lineup that changed around a bit, but everyone plays in different bands and stay mad busy so I just decided to write everything and record everything myself. Easier that way I figured, you feel?

You’re a one person wrecking machine recording all the instruments yourself. When did you start playing and writing music?

Yes! I’ve been playing drums since I was 4. I started guitar around the same time but it didn’t click as much until I got older. Even now it’s not an instrument I frequent, I just know how to play it alright. Same goes for bass, but I love playing bass more to be honest! I started writing music with my brother when I was in the 6th grade, and we played in a band together for like 11 years after that.

Aside from everyday life, have you ever felt as if your race has played a significant factor in your experience coming up through punk / hardcore?

Absolutely, these scenes are supposed to be inclusive and promote equality but it’s still heavily white, and there’s still mad judgement. There’s still mad racism, fools just are mad subtle about it. At the same time, people obviously try to tokenize it and that ain’t it either!

What were some of your biggest influences going into making this last record? Whether it’s musical or just inspiration from life.

Everything that’s been going on has been a major factor into this record. But for a lot of people, they think this sorta treatment is new for some reason. And I’m just like nah, it’s BEEN going on. But apart from all that, musically I’ve been straight up influenced by the likes of Jill Scott, Bobbi Humphrey, Ronnie Laws. Mainly soul and rhythm n blues truthfully is what really gets me going with the Zulu stuff.

What message would you like to send to future generations of black youth who may feel isolated or be unsure how to navigate through the world of punk?

Straight up if anyone tries to hassle you, or ever make you feel like an outsider in this scene —fight those fools. Don’t let anyone try to make you feel unwelcome. We’re the reason this is even a thing.