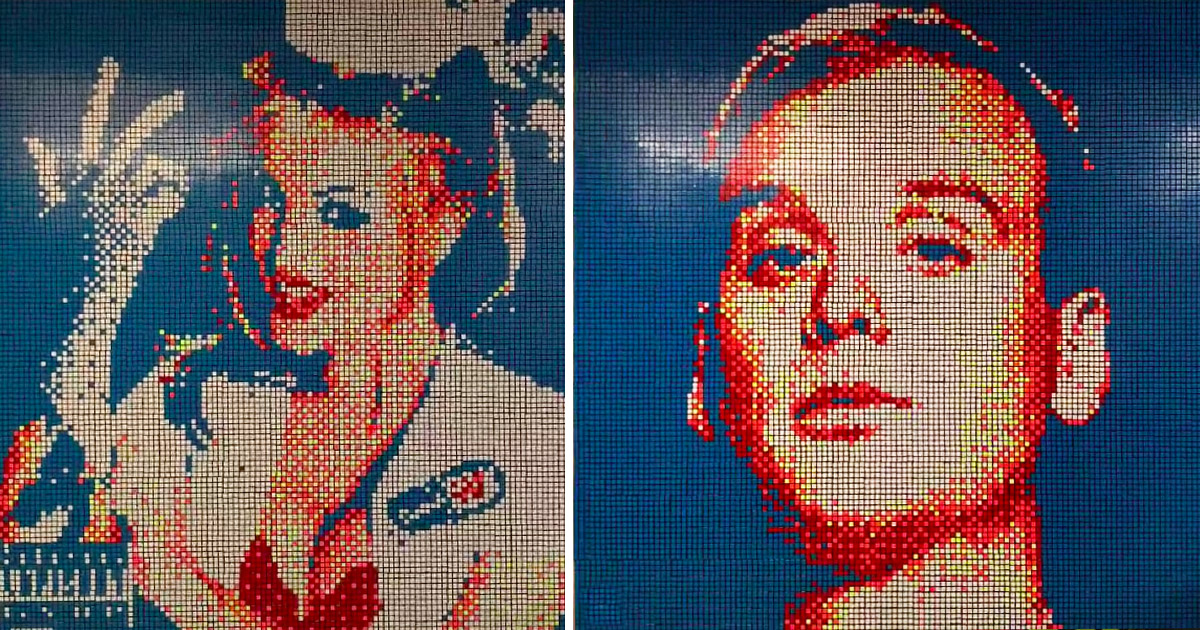 Meet the Artist Making Punk Portraits out of Rubik’s Cubes

Chances are you’ve toyed with a Rubik’s Cube before. Maybe you’ve even solved it, or at least lined up a few colors, before chucking it across the room in frustration. The 3-D puzzle took the world by storm in the ’80s, with its six colors, 26 mini cubes and estimated 43 quintillion combinations making it a popular toy (or at least, interactive desk accessory) even today.

The current world record for speed-solving the Rubik’s cube sits with Yusheng Du, who solved the puzzle in 3.47 seconds. While the average person may struggle to solve it in less than four seconds, or unapologetically never solve it at all, some use their quick Rubik’s skills to create art pieces.

Enter 37-year-old Torgeir Amundsen, a Rubik’s Cube artist hailing from Bodø, a town on the upper northwestern coast of Norway. By day, he works as a financial advisor, but by night, he transforms over one thousand Rubik’s Cubes into enormous, hyperrealistic mosaic-portraits of punk legends.

A few of his pieces include portraits of Green Day, Tom Morello of Rage Against The Machine and Inge Johansson of Against Me! Amundsen even created detailed renditions of famous album covers such as Blink-182’s Enema Of The State for its 20th anniversary, Rage Against The Machine’s Evil Empire for their return to live music and the hallowed Refused record The Shape Of Punk To Come, just for it being one of his favorites.

“I never played in a band myself, but me and a friend started a record label to put out music made by friends,” he tells me. “Doing this and being on tour across Europe with good friends are to this day some of the greatest memories I have in my life.”

He ran Great Northern Records and promoted artists Rumble in Rhodos, Dominic, Lukestar and others on their punk journeys in the mid-2000s.

“Getting involved in the punk scene got me interested in politics,” Amundsen notes. “And the DIY ethic is something I imagine will be a part of me throughout my life.”

While he also creates portraits of celebrities like Ariana Grande and comedians such as Bo Burnham, a great deal of his inspiration comes from the music community.

“In my art, I like to make portraits of people who have inspired me or affected my life in a positive way,” he says. “Punk has definitely done so, and will probably be an important inspiration for my future creations as well.”

Though it was tough to narrow down, Amundsen determined that his three favorite punk musicians include Matt Pryor, Matt Skiba and Walter Schreifels.

His art process is a feat in its own right. In fact, Amundsen has only been creating mosaics of this stature for less than three years, and taught himself to cube with YouTube videos. He takes about 30-40 seconds to solve a puzzle and anywhere from four to eight hours to complete a 1600-cube portrait.

To form the realistic faces in his work, he creates a sketch broken down into 14,400 pixels for his 1,600 cubes with the six iconic colors.

“The darkest areas become blue, then red, orange, yellow and white, the lighter it gets. The mosaic often goes through a trial and error process, but mostly in the preparation for the sketch. Once the sketch is ready, I just start at the bottom and cube myself through it,” he says. He often shares his cubing process on social media.

His talents have not only caught the attention of his art subjects, but also of the Rubik’s brand, who made Amundsen a Rubik’s Cube Ambassador. This allows him to create cool projects for public and social media use.

One such project was an installation for the world premiere of Gemini Man.  Rubiks’ YouTube channel shared how lead actor Will Smith was highly impressed with the 1,872-cube piece while it was showcased in Budapest.

“I have been fortunate enough to get to travel the world, meet people I never would have dreamt I was going to meet, see places I never have seen before and also work with and make friends with the most amazing people,” he says.

Be sure to keep up on all Amundsen’s creations by following his Instagram page @cubearting. Surely, more jaw-dropping art inspired by the DIY community is on its way.