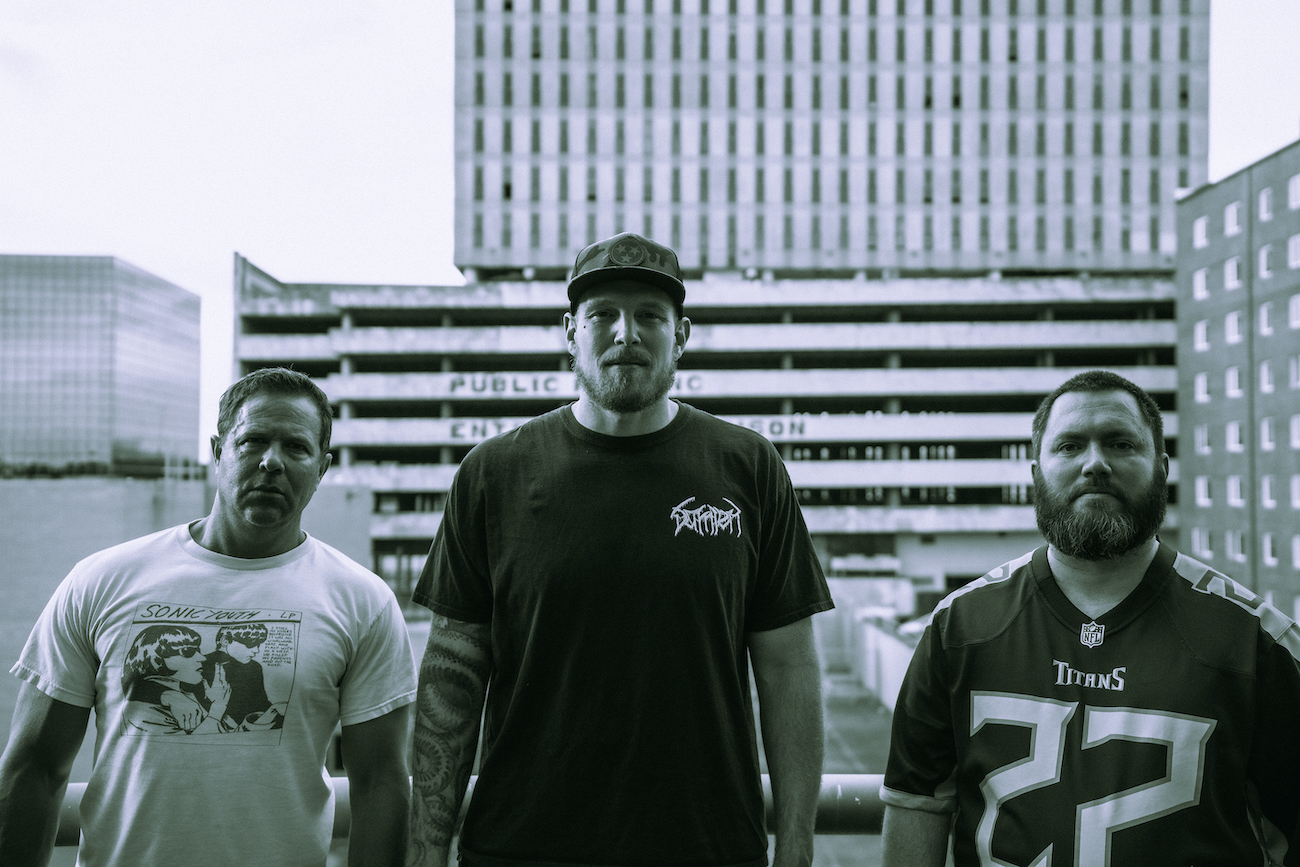 Hailing from Memphis, brutal hardcore crew Reserving Dirtnaps has shaken the ground with their latest EP Another Disaster out now via WAR Records. Over the course of eleven minutes and four tracks, RD cement their place in the genre as one of its most muscular and unrelenting. Led by the vein-bulging vocals of Brandon Pearce and backed by merciless instrumentation with notes of Merauder, Cold as Life, Neglect, Madball, and early Xibalba, Jesus Piece or early Harm’s Way, their sound also leans heavily on crushing, Obituary-style riffing.

“Under Siege”, the second track from the EP, is a bruising, teeth clenching track not for the faint of heart — but with a strong personal message.

“I wanted to capture that desperate feeling of struggle,” recalls vocalist Brandon Pearce about the track. “When the lyrics open with ‘the mongrel breed runs through these veins,’ some of that is personal in that I don’t know my heritage or what cultures I descended from. I grew up in a two parent household, but my biological father is a mystery so being the successor to vast wealth and privilege through some bloodline isn’t in the cards for me, or really anyone I associate with. So here we are, a random pack of stubborn people in a band and a bigger pack of stubborn people in the Memphis scene who together continue to exist. We hope that things get better but in the meantime we aren’t going to wait. This song puts the onus on us and the listener. If you want something done, you better make it happen now because tomorrow is not guaranteed. Otherwise, you are welcome to sit and do the same shit that leaves you disappointed until the day you die. It’s really up to any of us. We claim we have hopes and dreams and visions. How will they come to be? Who will make them reality?”

Head below for the premiere of the new video for “Under Siege” and a discussion with Pearse on Memphis, the new video and the future of recording for the band.

Hard Noise: Memphis has a rich musical history, with some of the greatest hardcore punk of all time (Deathreat, His Hero is Gone, others) and incredible rap, garage punk, and many legacy artists. How do you think that Memphis — and this question is specifically not aimed at punk/punk adjacent scene stuff — has helped foster you as a band?

Brandon Pearce: Before I address the non-punk influence of Memphis, like any scene, there is a very long list of Memphis bands who broke out or just held it down in their area but Clenched Fist, Dead City, and Bury the Living are the greatest Memphis hardcore to me. It’s what I came up on. All three bands were savage in their own styles. I went to shows for around 10 years before I ever joined a band, but all three of those bands had an extremely intense vibe and epitomized how a DIY hardcore band is supposed to operate. I am so thankful that I was there for that shit because I would never have been in a band or done any of the things with music that I have done if it wasn’t for seeing real hardcore while growing up in Memphis.

Without sounding melodramatic, I would say the non-punk scene influence [of Memphis] is a beautiful green place that prides itself on being hospitable and welcoming to strangers but also a terrifying, blight-ridden city where you could be killed for everything and nothing.

Some people say there is no place like Memphis and believe there is magic energy here, and some say Memphis is a hopeless shithole that is infested with gangs. It seems a lot of people want to jack their entire sound and aesthetic from rap that children made in Memphis in the early ’90s but then won’t come here or play here because we are too poor. We are told that no one cares about Memphis and that we will always be overlooked and ignored.

Someone may read this and think I am whining, but when enough people tell you that, it gets stuck in your head. You just get calloused to it after a while. This is where the universe decided to drop us off. We can either try to make something happen or just give up. It is what it is. Growing up here, you know that this is the place where MLK was assassinated. Every form of human ignorance and predatory exploitation, from every race and creed, has held the city back from being whatever it is supposed to be. Here we are.

Another Disaster is your latest EP and you dedicated it to this year and all the surrounding turmoil. How has this year affected you specifically? How has that manifested in the release?

When we had to get the bio put together, obviously the year 2020 was pretty fucked. It sounded kind of ominous to be like “this is 2020 coming in hot through a 5150 with bad intentions.” But to be very blunt, all of these songs were written between 2-3 years ago and the entire recording was finished in the fall of 2019. I’m not happy that 2020 has set the stage for songs like this.

I feel very privileged to be alive and in my own home at the moment. Unfortunately, the only new problem in 2020 is Covid-19. All of the other issues and problems surrounding imperialism, classism, racism, etc. aren’t anything new. I don’t mean that in a dismissive way — it’s just the painful, bleak reality of the human ego and the lust for domination and power. It seems we get beat to death with every “-ism” of every possible category and then people want to send you to the gulag if you don’t immediately bow down to whatever ideology currently makes them feel emboldened and sanctified. Fundamentalists of all types demand that you join them in the war against their enemies — foreign and domestic.

2020 has left me wondering what the fuck can I do to make this place acceptable for the future generations, because when I’m around my nieces and nephew, I look at them and think there’s no justice, there’s just us. So common people have to fight to make this world a livable place, because it sure as hell ain’t happening on its own. And sadly, as it’s always been throughout history, you have struggling, working people ready to murder each other in the street over which political and media personality has manipulated them the most. Throwing social media into the fray over the last decade has just made comforting personal echo chambers for everyone.

The new EP is your 4th overall. Any plans on an LP? There is a running theory that punk works best in short format. Do you agree with that sentiment?

We definitely want to put together a proper LP. I agree that punk works best in the short format, but mainly it seems our attention spans have been reduced to seconds. And according to whatever dickhead runs Spotify you need to crank out the content as fast as possible to satiate their algorithms and pocketbook. We like to leave that shit in the fire until it’s white hot, so when will the LP happen? We already have a few new ones mapped out, but time will tell.

Give us some background on the new video, the making of it and any concepts surrounding it.

Originally we had more elaborate plans to coordinate us playing in a few different spots with some epic shots of people going crazy. All the normal hopes and dreams. We had filmed some b-roll clips of the city and this whole scene where we were at Gus’s eating fried chicken and drinking beer, but then Covid-19 struck and that put the brakes on everything. As time went by we didn’t really know how safe or dangerous it was to be around people. No offense to anyone who filmed remote split screen quarantine videos where people were in different locations, but that’s not really something we wanted to do.

This next part is kind of the summary of how Reserving Dirtnaps operates at times. Weeks turned into months during the initial lockdown and we were stuck wondering what we were going to do. So finally, I had one of those “god dammit fuck this shit” moments and started building these segments of the video.

I went through as many videos as I could find on my hard drive, YouTube, Instagram, Facebook, etc. to find any segments that would sync up. Any random clip we had from tours or shows in Memphis and beyond was game. Once I figured that out, I started piecing clips and random shots together trying to build some kind of flow.

At this point we thought it was a wrap and moved on to filming a live stream for a digital fest. We put in some work and did something pretty cool at the Hi Tone here in Memphis. A few weeks went by and we had to part ways with our drummer. Due to the circumstances, we were faced with dropping from the digital fest and scrapping the video. Some time went by and then in more moments of desperation I went back and made 60-70% of the video again. I had a few nights where I would start working on it at 10 PM and just go until I felt like I was going to pass out. Some of the shots you see are from the live stream recording and then others are just every single piecemeal clip we could summon.

I have no clue what anyone’s take on the video will be, but given the circumstances I gave it my best shot. In 2020, you already know someone is going to shit on everything you do so take it or leave it. If you like the video great, and if you don’t then fuck off. I’m proud of everything that we went through to have every single one of those clips.