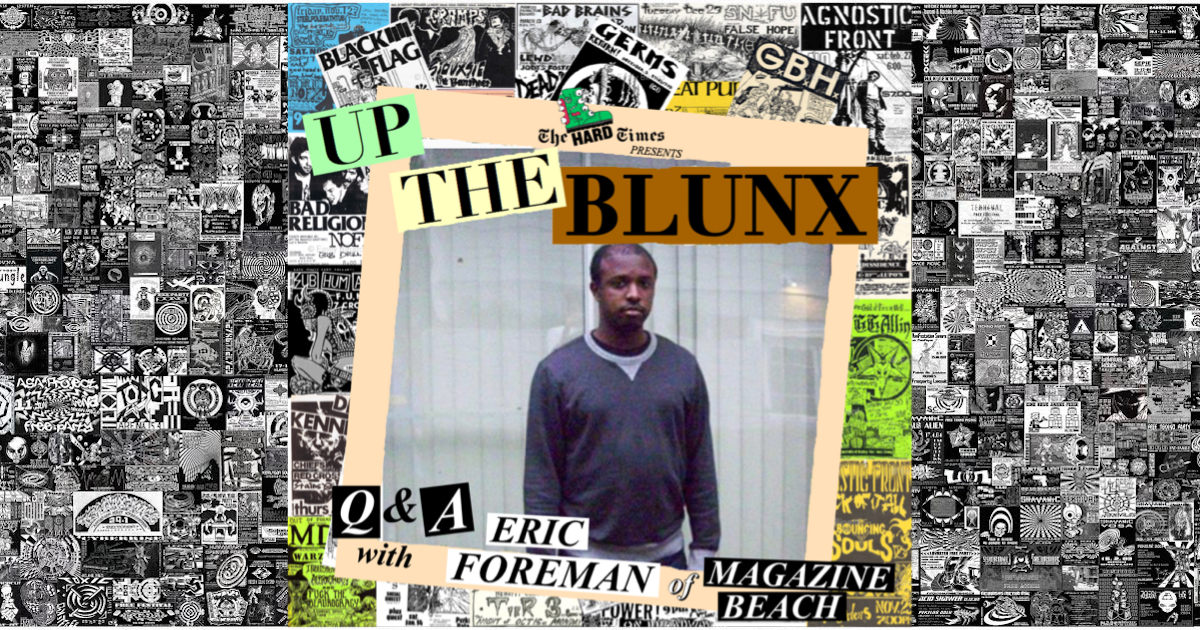 Up the Blunx Featured Artist: Eric Foreman of Magazine Beach

Up the Blunx is a podcast where two Black punks from different walks of life get together to voice their opinions on everything from straight edge to condiments to the police. The show, from comedian Kevin Tit and End It frontman Akil Godsey, regularly features music from Black artists. In this series, we dig a little deeper into the artists behind the music featured on Up the Blunx. This week’s Q&A is with Eric Foreman, bassist for Washington DC’s Magazine Beach. Their song “I Don’t Mind” (off new EP Friendless Summer) was featured on episode10.

What was the first song you heard that ignited your interest in punk?

I think the first song that I heard that got me in the punk-sphere was “For a Pessimist, I’m Pretty Optimistic” by Paramore. I came upon it by accident in 9th grade and it was so much different than what the other kids I knew were listening to. The energy of the song is so infectious, and I was hooked immediately. I didn’t know anything about pop-punk (or anything else) at the time and that song just completely blew the door off the hinges for me

When did you start playing music?

I remember knowing that I wanted to be in a band as early as middle school, but I didn’t start learning how to play guitar until 9th grade I believe. I switched to bass a few years later and have stuck with it since!

What was your experience like when you started going to shows? Do you feel like your race affected it?

When I first started going to shows, I was just so overwhelmed by the noise and the energy of it that I was pretty oblivious to anything else. I think my first show was Fall Out Boy, sometime in early high school. It wasn’t until I had been going to shows regularly for a few years that I began to notice that I was often the only black kid there, or at least one of the few. I think it was something that I put out of my mind most of the time so I could be more engaged with what I was experiencing, but I do remember feeling a lot more comfortable when I would go to show and there would be kids that looked like me there.

What’s next for Magazine Beach (when/if the world ever comes back)?

We REALLY miss playing shows so we will want to get that going once it is safe to do so again. Until then, we are trying to get the word out about the EP we just released, Friendless Summer! We are brainstorming ideas for a few music videos, thinking of some cool merch ideas and trying to connect with other cool bands over the internet (@magazinebeans, holla).

Any words of encouragement you’d like to give to your younger self or any young black kids trying to navigate their way through punk?

Don’t let anyone make you feel like you don’t belong, because you do. Like what you like and don’t change that for anybody. I would also say don’t be scared to reach out to other black kids (or musicians) that you see at shows!