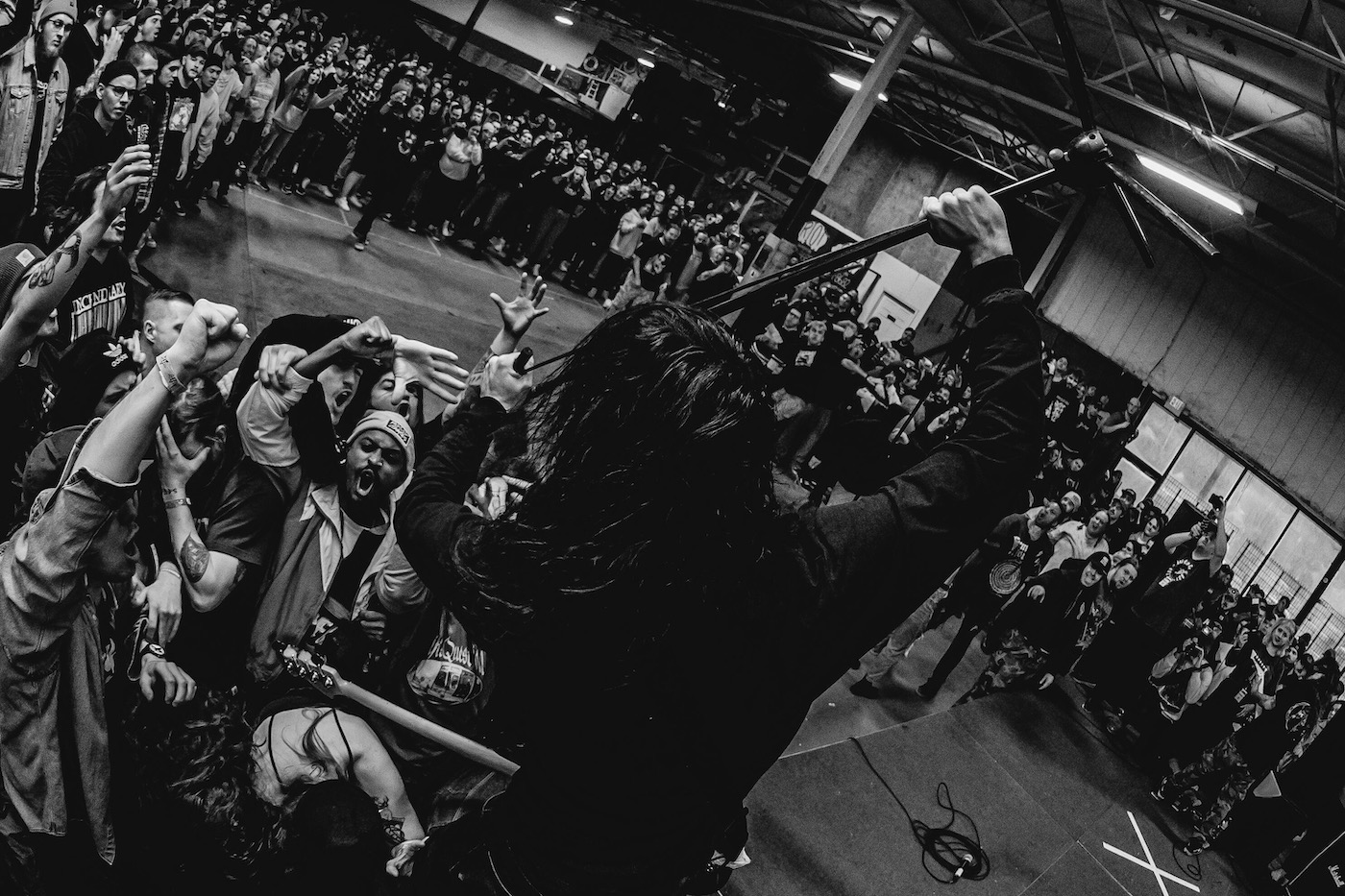 Fuming Mouth on New EP, Livestreaming and the New Wave of Death Metal

In June 2019, Fuming Mouth’s The Grand Descent was a meteor smashing into the metal and hardcore scenes — unexpected, fiery, and leaving a giant impression in its wake. Released via the venerable Triple B Records, Fuming Mouth’s sound owes more to Stockholm style death metal than Warzone or Madball, leaning on bands like Dismember, Nihilist and Entombed for their steamrolling, buzzsaw guitar attack. The band followed up the release with a gang of tour dates with some of the most respected names hardcore/metal including Harms Way, Integrity, Sanction, The Acacia Strain, Vein, Gatecreeper and more, spreading their HM2-tinged rage from sea to shining sea.

The band’s latest entry is Beyond the Tomb, a new EP for new label home Nuclear Blast featuring three tracks that don’t stray far from the formula found on their debut. Opening with the title track, Fuming Mouth’s death growls overlay the entirety of death metal approaches — from grinding blasts to mid-tempo hate to doom-y breakdowns — all while digging into black metal influences, Swedish hardcore and more across a short but venomous 12 minutes. It’s more than likely meant as a teaser, and one that already has fans salivating for a new full length from the Massachusetts band.

We cornered Fuming Mouth vocalist/guitarist Mark Whelan to talk about their bloodthirsty new effort, their new alliance with Nuclear Blast and why they feel that death metal in 2020 is totally inspiring. The results of our conversation are below.

Your new EP is called Beyond the Tomb, which mirrors the title for the first track. How far along are you guys with the second LP? Are these songs that don’t conceptually fit?

Well, we got the first song for the next album. And we got the last song for it. And we have a song in the middle. So we just have to fill in the gaps. I think the Beyond the Tomb songs might have conceptually fit the album, but they couldn’t sonically.

When we toured down to FYA this year we brought my laptop and listened to a ton of our demos in the van. One of the songs we kept playing over, and over, and over again. That was the song that made me realize where the album was going. It was a huge eye opener. A lot of the other demos on that run were songs that became Beyond the Tomb.

How did the alliance with Nuclear Blast come about? What are some of your favorite bands or releases from the label?

There were so many people involved in getting us signed to Nuclear Blast. The biggest person was Ian McFarland. He played bass in Blood for Blood. We were trying to shoot a music video for Visions of Purgatory with him that never worked out. Throughout that process he pointed us to our lawyer Patti who really made it happen.

Fred Estby was another person who helped. We played a show in Brooklyn, NY that he did sound at. He thought it would be cool and really planted the idea in our head. He’s also in my favorite band on the label, Dismember. It’s hard for me to say what my favorite release from them is but Like an Everflowing Stream has got to be it. It’s a timeless album.

The last show we played was with Fleshrot, Ghidorah, and Cadaver Systems in Odessa, Texas. It was a headliner on a tour off-day. Such an awesome show. The last show I saw was Fiddlehead on that same tour. They played down the street from where we played on Long Island. A few of us snuck out of the show and went to see them.

How much do you think your writing reflects the live stage?

I think it’s back and forth with writing reflecting the live stage. Sometimes I daydream about playing live and write off of that. Other times I focus only on my fretboard. It depends.

What are your personal thoughts on live-streaming? Once touring resumes, who are your dream touring partners and why?

I hate live streaming shows. It’s stupid and I don’t get it. What’s the difference between that and an Audiotree set? I guess I’ve seen it work for some bands, and that’s been really cool actually. But these bands going on virtual tours? You’ve got to be kidding me. To be honest I don’t even care who we tour with. I just want to play Fuming Mouth shows.

If you were forced to pick a single style of death metal, what would you choose and why? American DM from Florida? Finnish DM? Stockholm style?

Modern day death metal. Every band is killing it right now and they inspire us to go even further. And it’s not at its peak, it’s just getting started.