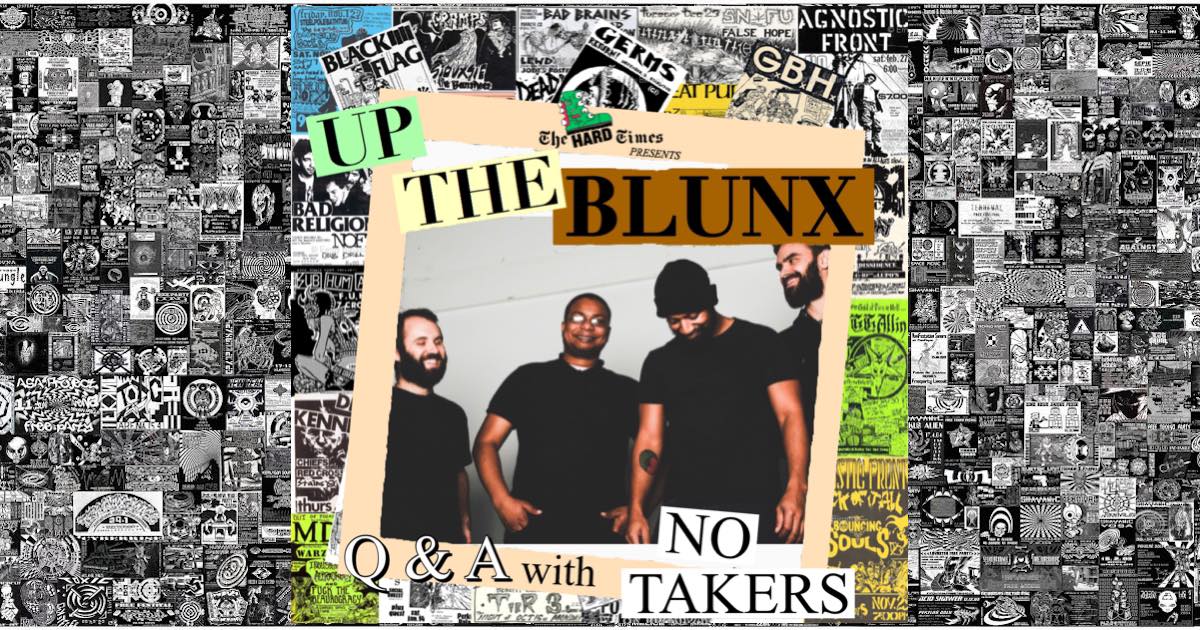 Up the Blunx Featured Artist: NO TAKERS

Up the Blunx is a podcast where two Black punks from different walks of life get together to voice their opinions on everything from straight edge to condiments to the police. The show, from comedian Kevin Tit and End It frontman Akil Godsey, regularly features music from Black artists. In this series, we dig a little deeper into the artists behind the music featured on Up the Blunx. This week’s Q&A is with Jason Chavez and Brandon Davis of Denver’s No Takers, whose song “Relentless” was featured on episode 12.

How did No Takers get started?

Jason Chavez: Ryan Longenecker (drums), Delon Beckett (guitar), and I (bass) started a band in Bremerton, WA, around 2003-2004 called Outnumbered. Meanwhile, Brandon Davis had a band around the same time in the DC area called The Repercussions. Coincidentally, both of our bands moved to Denver in 2006 within a few months of each other and met at a show (The Briefs with The Casualties, I think), and we all became close friends.

Although we all remained friends over the years, we went our separate ways musically and professionally for about a decade. Fast forward to 2016, Delon moved back to Denver after living in California for a few years and the three of us (Ryan, Delon and Jason) started playing again. At first it was just for fun, but the songs developed and we asked our close friend, Brandon Davis, to sing. We’ve been playing shows since 2018 and released our first album the same year.

What was your experience like being black in the Denver punk scene?

Brandon Davis: So I actually grew up on the east coast in the DC area and Delon grew up on the west coast, both in southern California and then the Seattle area. There seemed to be a lot more black punks out on the east coast than in Denver. While it was still rare, you felt as if it wasn’t a miracle to find another black punk back east. In Denver, the punk scene is a lot less diverse, but much of that is owed to the fact that the city and state are less diverse in general.

When Delon and I showed up in the scene back in 2006, we would often get confused for one another as if there couldn’t possibly be two black punk rock dudes in the same city. From time to time you also get the comment, “it’s rare to see a black guy in a punk band,” which got old real fast. Other times people assume I played bass or drums, when in reality I played guitar and sang vocals. The stereotypes are real, the racist punks are real, but you can’t let any of that slow you down or stop you from putting out good music.

Were there any older bands from your scene with black members that you identified with?

Brandon Davis: Being from DC, Bad Brains is at the top of my list here. They are huge inspirations and definitely a band that epitomizes the punk spirit. In my music career I’ve had the fortune of playing a show with H.R. when he was on tour promoting his solo work. He’s an interesting dude and Bad Brains as a whole is responsible for so many black kids getting into punk rock. They’re the perfect example of a band not having to be “punk by the book” and still kicking so much ass at the same time.

Any plans for NO TAKERS once it’s safe to play shows again?

Jason Chavez: We’ve got about ten songs ready to record so we’re hoping to get that done in the near future so we can release a second album. We’ve been super fortunate to be put on some incredible shows locally and hope that momentum continues. Fingers crossed AEG and Live Nation don’t gobble up the few remaining independent venues in town, as we’ve watched them both cannibalize and consolidate the Denver scene for years now.

What advice would you like to relay to future generations of young black punks coming up in Denver or anywhere else in the world?

Brandon Davis: For future and current black punks, I would say to not view yourself as someone who needs to fit into the scene, but rather as someone who will shake up the punk scene as a whole. Don’t worry about trying to sound like any other band or look a certain way, carve your own path with that punk rock spirit and write music that means something. Don’t be fooled into thinking that everyone in the punk scene is open to your blackness either, because there’s still a lot of racism in the punk community.

Lastly, don’t let people make you feel strange or out of place for playing punk as a black person. Black people have had to break barriers for hundreds of years and being a black punk is no different. Own your music, own your message, keep your art sharp, and call out BS when you see it. Black people are already living in a world of structural inequalities. You can use punk rock to give insight into your lived experiences.