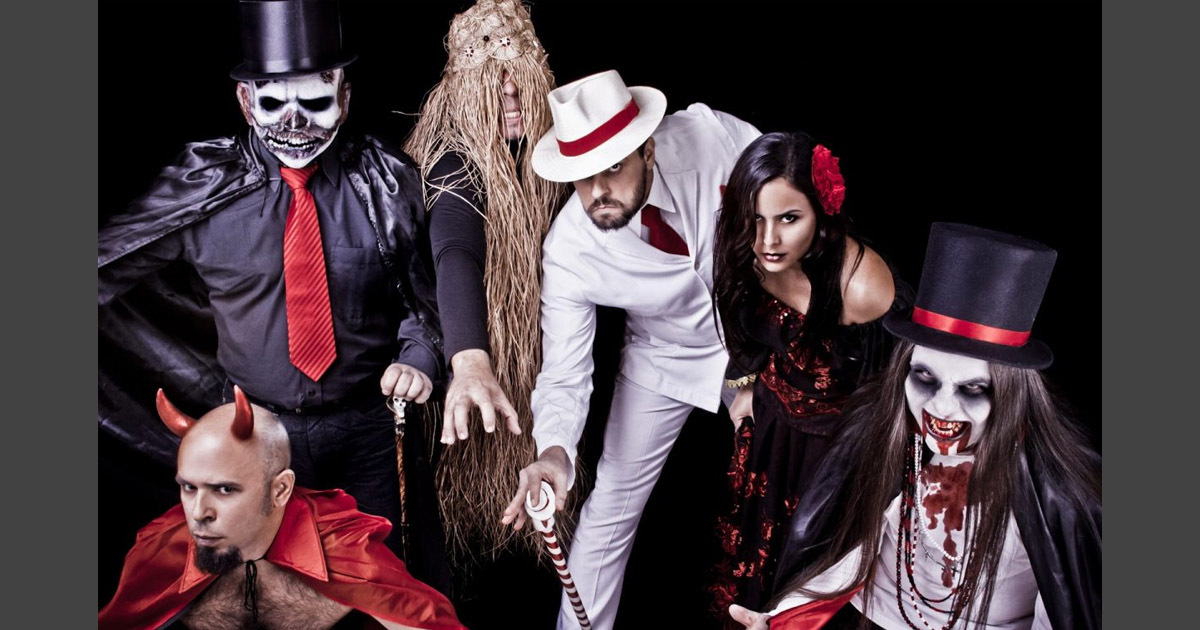 The tradition of infusing punk and metal with humor and political critique is as old as the Rock Against Bush compilations are long. With the rise of far-right regimes in the US and UK over the last few years, the responses from bands have been swift and loud, with parallel themes appropriate to the eerie similarities between both countries’ blowhard figureheads.

Brazil offers their own brand of modern fascism in the reign of president Jair Bolsonaro, and one musical answer to it can be seen in the long-running thrash metal band Gangrena Gasosa.

The only band that plays Saravá metal (“sarava” referring to Afro-Brazilian mantras related to “god,” “the earth,” and “energy”) in the world released, in February, a music video for the title track off their EP Kizila. When posted on Facebook, the video was deleted for going against the platform’s hate speech rules.

The song “Kizila” makes an acidic critique of religious fanaticism and people who hide the crimes and abuses of their religious leaders. With (translated) lyrics like “Your Priest is a pedophile / You pretend not to know” and “I’d rather be a Pagan / Than support a killer,” their message is packed with as much fury and gallows humor as any Jello Biafra line.

Gangrena Gasosa has spent 30 years on the road and recorded 4 albums (along with several EP’s and demo tapes) of thrash metal and hardcore, incorporating elements of umbanda and other Afro-Brazilian religions in its music and visuals. The band is known for making despachos, or religious rituals, on stage.

GG has been active since 1990, with a lineup too long and fluid to name them all. Ângelo Arede (Zé Pelintra) took over vocals in 1996, and band invested more heavily in percussion, especially in the atabaque, an Afro-Brazilian instrument which gives the band its unique sound. Arede was also briefly the bass player for Dorsal Atlântica, one of the most important heavy/trash metal bands in Brazilian history.

On stage, the band’s musicians dress up as Afro-Brazilian deities: Zé Pelintra, Exú Caveira, Pomba Gira, Exú Tranca, Omulu and Exú Tiriri. The group also incorporates pontos de umbanda, or religious chants, in several of their songs. With albums with names like Smells Like Tenda Espírita (Smells Like Spiritist Tent) and Se Deus é 10, Satanás é 666 (If God is 10, Satan is 666), to say they’re controversial doesn’t quite cover it.

Arede explains that the band emerged when “the boys, skateboarding through the West and North Zones of Rio, began to mix macumba symbols with elements of the alternative culture of the ’90s.”

In Brazil, Macumba refers to offerings to the orixás, something like witchcraft or black magic. The band’s relationship with Afro-Brazilian religions “started off unpretentiously, as a joke,” says Arede.

“In the beginning, the idea of dressing up as Exu had more to do with diverting attention from the little musical experience of the members, making fun more of the well-known relationship of Metal with occultism and Satanism than anything else,” he adds.

But Satanism as a concept has nothing to do with Exu or Afro-Brazilian religions. The idea was to play with the way Brazilians deal with the occult, the unknown. In fact, as they consider themselves a sort of parody band, this purposeful confusion “always was and always will be a provocation. Scaring a believer is a bonus. The believer almost always gets scared and gets angry because he wants to eliminate everything that is different from him.”

Those who think the guys from Gangrena intend to disrespect the Afro-Brazilian religions are wrong. On the contrary, explains Arede, he is himself the son of a Mãe de Santo or Ialorixá, a priestess of a terreiro, the place of worship of several Afro-Brazilian religions. Since he joined the band, he tries to avoid any disrespect, respectfully incorporating the language of Umbanda and Canbomblé.

But as with any band with such a long career, there were conflicts. After the release of the album Smells Like Tenda Espírita, in 2000, the band broke up. They returned in 2004, recording Se Deus é 10, Satanás é 666 in 2011. After a successful crowdfunding campaign, the band recorded Gente Ruim Só Manda Lembrança pra Quem Não Presta (Bad People Only Send Regards to People Who Suck), in 2018, marking the debut of Eder Santana (Omulu), to share vocal duties with Arede.

The band hopes to continue with their shows after the end of the pandemic with their slavish humor and political satire.

“Humor is an essential part of Gangrena. But sometimes you lose the thread of what is political. For many years I saw the band as completely detached from any political criticism. But everything is political. Humor itself is political. Being an artist in Brazil is political. Any provocative artistic expression ends up being a political tool, even if involuntary, but because of what we’ve been through in the last few years [with a far-right government] this is clearer than before,” explains Arede.

In the end, he says “having a metal band with humor as the main theme, composed of five suburban men and a suburban woman dressed as Exú, is fucking political.”