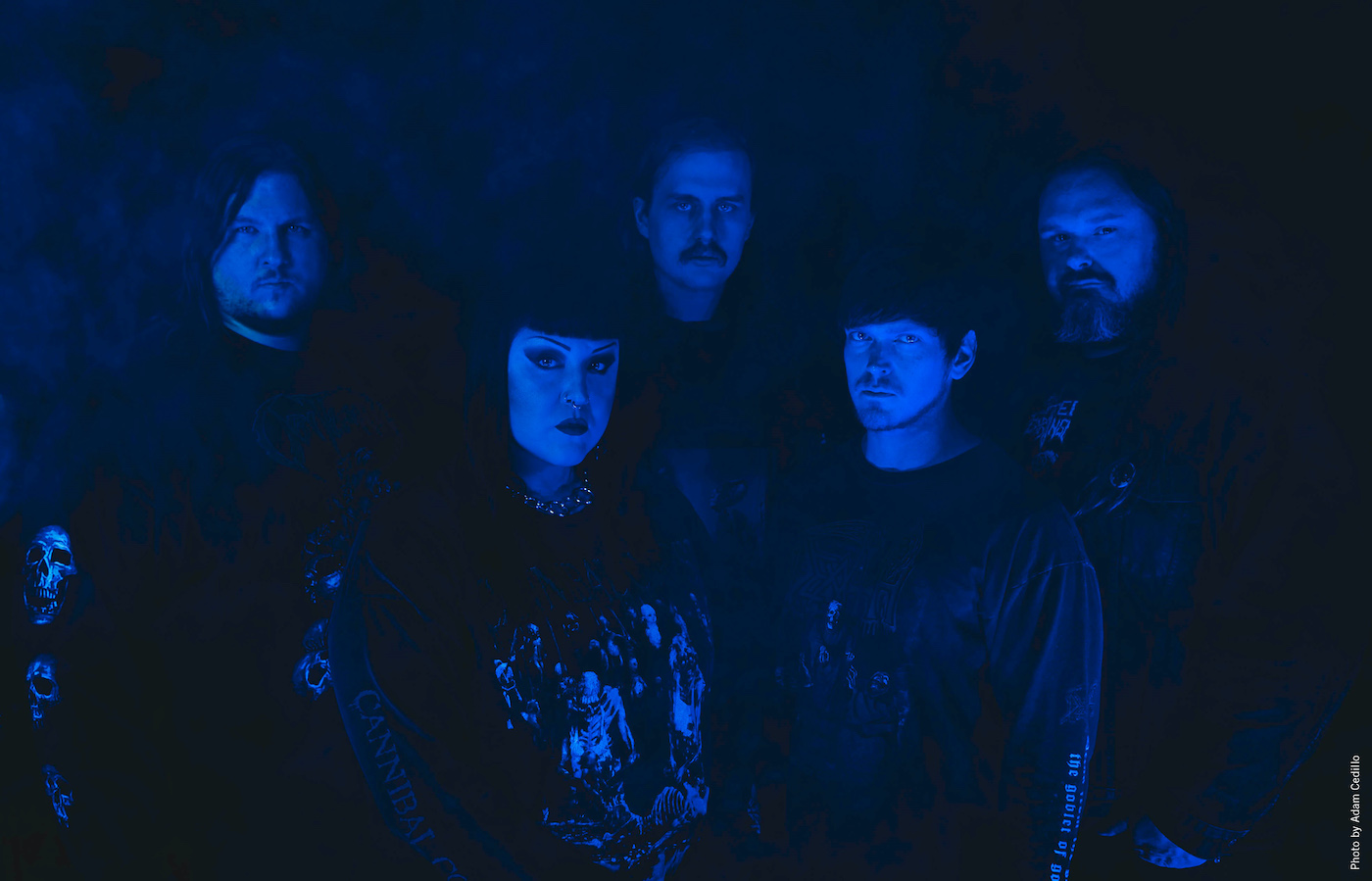 It was a little more than two years ago when Fort Worth old school death metal maniacs Frozen Soul kicked out their demo Encased in Ice to a very receptive audience on respected indie Maggot Stomp.  Containing only four songs, one of which was a cover of the Mortician favorite “Witches’ Coven,” Frozen Soul’s demo caused major ripples in the death metal underground, to the point that the band signed on to Century Media and rereleased it as their debut EP with the label.

Opening with a simple yet ominous riff, it takes a third of the first song “Encased in Ice” to lapse before the band opens up into a searing death metal section lead by the Karl Willetts-esque vocals of Chad Green. From there, Frozen Soul play a simple and brutal Stockholm-influenced style of death metal with touches of Bolt Thrower, tipping their hat to punk the whole way through. It’s an impressive EP, but an even more impressive demo.

With Frozen Soul’s debut LP Crypt of Ice out today, we spoke with vocalist Chad Green about the band’s DIY beginnings, the Dallas scene, Riley Gale and more. The results of our conversation are below.

You guys have been around for a little bit in the Dallas scene. How do you think the DIY scene has fostered you and prepared you to be a band thus far?

To be honest if it wasn’t for the DIY scene we would be nowhere, that’s for sure! Just about all of us in the band have been a part of the metal hardcore and punk scene since the early 2000s and going to DIY shows and seeing how things work is the sole reason we knew what to do and how to do it, to get to where we are now.

Where were you and how did you hear about the passing of Riley Gale? Did he have any involvement with your band directly or indirectly? How did his passing affect you?

That day I was driving home from the gym early before the news got out, and got a call from one of me and Riley’s close friends in confidence. I had to pull my car over because I felt like I was going to have a heart attack. Riley was my brother and one of the first people who made me feel like I was a part of the scene, or anything really, around 2004. He once broke my nose moshing to Evergreen Terrace, haha.

I was pretty fucked for awhile after finding out, and still am if I sit and think about it. But I know he wouldn’t want anyone to be bummed, he would want everyone to be happy and to live the best quality life. Riley had everything to do with this band. He influenced everything in our scene and the lives of his friends. He would give me advice, words of wisdom and tell me things he knew would make me happy to hear because he was just a great guy and friend!

I was fortunate to talk with him one last time the week before he passed. Frozen Soul was working on a livestream event and he was going to be the host. I’ll miss him until the end of time, and will never forget him.

You’ve stated in some of the promo material that you “never expected to be signed.” Who are some classic bands that you’ve looked up to over the years musically / career-wise?

It’s just not something you imagine happening coming up in the DIY scene. We looked to bands from our state like Power Trip, Iron Age, Mammoth Grinder, Devourment for guidance, and old school bands like Bolt Thrower, Obituary and Mortician to craft our sound the way we wanted to hear it, and just did what we loved. That was most important to us, rather than looking at it like a career.

Your initial demo hit via Maggot Stomp. How do you think that label and the small cult that surrounds it has benefitted you as you’ve taken a larger step forward?

Maggot Stomp is amazing and Scott is my brother. He helped us tremendously with getting our foot in the door and helped us realize just how important it was to give this 100%. The no weak shit mentality is strong and it did everything to help us make that push!

In creating your new LP, what were some of your goals? Why re-record three previous songs?

We wanted to give people the LP we wanted to give them, and we felt the demo songs weren’t given justice with what we knew and what we could do at the time. So we felt it was important to re-record them so we could show the world the heavy ass record we imagined!

Obviously COVID has severely hurt the record industry but let’s face it, there are some advantages to having all of this time off. How do you think that COVID has either been beneficial or detrimental, or both, to you as a band?

It’s been really weird for sure. In the positive, it’s helped us craft what we needed and really take the time to practice and do things right. On the negative, it’s canceled two amazing tours that would have taken us all over the country and really let us feel the energy and impact the record has made. Either way though, we’re staying positive and staying focused!

From Iron Age to Power Trip to Creeping Death to you guys, central Texas has a rich and varied musical history that has fostered a lot of great bands. Who do you think is great and on the come up?

It’s been amazing growing up in the Texas hardcore punk and metal scene. We owe a lot to those bands for helping shape us as people and musicians! There’s a lot of really sick bands coming up in Texas right now. Kombat, Imperial Slaughter, Malignant Altar, Necrofier, Wyrm Chasm, Cognizant, Forebode, the future is looking bright and I’m so stoked for it!