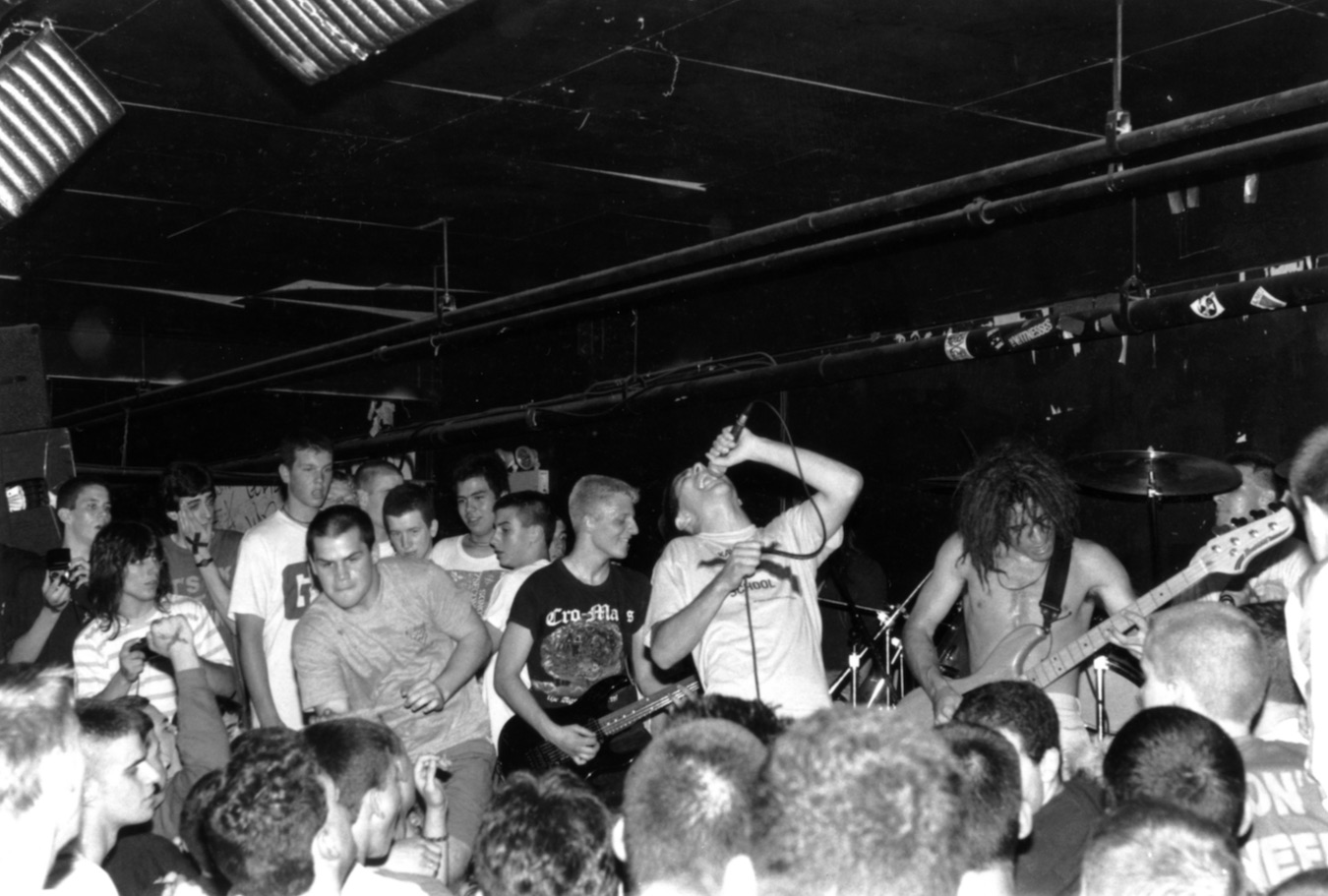 Beyond Frontman and Director on New Documentary, Band’s Quietly Massive Impact on Hardcore

Kevin Egan is wearing a few different hats lately. Egan has been hustling to promote his new documentary What Awaits Us: A Beyond Story, a first-person telling of the band’s reunion in which Egan serves as writer, director, film subject and de facto host. The focus is the legendary Beyond — a New York hardcore punk band like no other, and one that inspired legions and spawned bands that legitimately changed the direction of music as we know it.

Beyond formed in 1988 and quickly gained buzz via their Dew It! demo from that same year. The record was praised for its then-unique approach to hardcore-meets-metal, retaining the speed and brutality seen in hardcore bands of the time with the technical wizardry of metal. And though the band only spawned one LP, the now much-loved No Longer At Ease, their influence on the scene cannot be overstated.

Members of Beyond went on to form or join bands like Inside Out, 108, 1.6 Band, Quicksand, Burn, Shelter, Bold and many others. And while each of these bands is part of the greater hardcore canon, Beyond is and always has been one for the connoisseurs, the true heads, those in the know — most likely due to the band’s limited life and releases on small and now defunct labels.

What Awaits Us: A Beyond Story seeks to right these wrongs by telling the band’s unique place in the growing scene that was hardcore in the late ’80s, leaning on interviews from pillars of that community like Walter Schriefels, Sam Seigler, Porcell, and many many more. The documentary is available for viewing now. We cornered Kevin Egan to discuss the film, the band and its impact, and who else he thought didn’t get their due from that scene.  The results of that conversation are below.

How did the idea for Beyond come about between you and Tom Capone? What were the musical common grounds that you bonded over and why?

Tom’s previous band, Third Planet, had broken up and he and I were going to a lot of shows together, so it seemed like the natural thing to do. I suggested we start a band and he first auditioned me as we were driving around our hometown of Holbrook, NY. I sang along to a Uniform Choice record and passed the audition.

He was already deep into hardcore and I was just getting my feet wet, getting into bands like Minor Threat, Dag Nasty, Youth of Today. Hardcore seemed like such an extreme form of expression, other types of music paled in comparison. Youth of Today and Straight Ahead especially were about as radical as it got and I wanted to be a part of that scene. Minor Threat appealed to me because they had a little musical talent. Dag Nasty, too. Coming out of metal, that was important to me. It was our love for those bands that formed the sound of Beyond.

The Beyond sound was incredibly ahead of its time. The documentary makes clear that Youth of Today was a strong influence, as well as much of the hardcore scene. As a vocalist, and lyricist, who were some of the people you looked up to?

Ian McKaye and Kevin Seconds were my biggest influences vocally. Ian had such a unique way of singing that was just as aggressive as a drummer banging on drums. Kevin sang with such positivity, it was impossible to not get infected by his vibes. Their lyrics, especially Ian’s with Minor Threat and Embrace, were my favorite at the time. They were about taking a stand against a corrupt world. As a teenager, I saw myself taking those same stands, not just from a straight edge point of view, but against society as a whole. When I was metalhead, I experienced a lot of prejudice in school, public, wherever, so I already saw myself as an outcast. Hardcore just provided an outlet and a sense of belonging.

As a member of Beyond why did you feel like it was important for you to tell the story as opposed to an outside party?

Truthfully, the documentary grew out of the fact that I had a camera and a band to shoot. It was that simple. I did try to make the film as personal as possible, this way it would reflect my own feelings about Beyond rather than an objective approach that someone else might take. Singing for Beyond today has different meaning to me than when I was a teenager. I tried to make the film about that too, instead of it just being 100% historical.

As part of the hardcore scene in the ’80s/’90s, you had to scrape and claw to find some of these releases, and be a part of the scene to become aware of what was going on. In today’s instant information age where information is just a Google search away, how do you think that has positively or negatively affected the music and the scene?

I think hardcore is now a more global phenomenon, rather than the local one it was before the Internet. We get emails now from Hardcore kids all over the world, which is very different than the crux of the letters you received in the mail all coming from New York or New Jersey. I’m happy our music can be reached by everyone, although when it was localized, you knew everyone who was into your band personally and that made it extra special.

If you had to quantify a single show as the highlight for the band, what would it be and why?

Opening up the For Pete’s Sake benefit at CBGB. The guys from Gorilla Biscuits got us on the bill, which was packed with so many incredible bands. Even Leeway and Straight Ahead played a few songs each, which was really special because I thought I got into hardcore too late to see Straight Ahead and suddenly we were on the same bill. That show was really special to me. Luckily someone filmed it and I was able to fit it into the documentary.

Beyond and its tributaries spawned some of the biggest and most influential bands in hardcore adjacent music. What is your favorite post-Beyond project and why?

Inside Out, definitely. I think Vic took what we did with Beyond and perfected it. And Zack’s vocals are some of the best in the history of the genre. What’s funny is, I only sat down and gave that 7-inch a good listen a few years ago. In the ’90s I made it a point to not listen to any of the bands people from Beyond played in, because I didn’t want it to influence whatever music I was making. It’s silly now when I think about it, but I was trying to establish my own musical identity.

A big story of Beyond is “what could have been.” What do you think is a band (other than Beyond) that you also wonder the same thing about?

Leeway, for sure. They were the one band who fused metal and hardcore perfectly. There was nothing cheesy about it all. And Eddie was one of the greatest singers in New York. I don’t know the whole story, but I remember the album taking way too long to come out and they sort of missed their time. It was a shame, because for a while there was no one better than them.

Do you think Beyond will play again? What about 1.6 Band?

Beyond will definitely play again. Last year we played seven or eight shows and once the pandemic is over, I hope we keep that up. I really enjoy playing. The songs have very deep meaning for me, especially after all this time has passed. Not to mention the friendships within the bands. It goes back to when we were kids and that makes it extra special.

1.6 Band, I don’t know. I would love to play with them again. Those guys were part of the same crew we hung out with when we were forming Beyond, so the friendships run deep. Anytime an offer has come up though, we can never really get it together, sadly. I wish we could, just so I can spend as much time with them as possible.