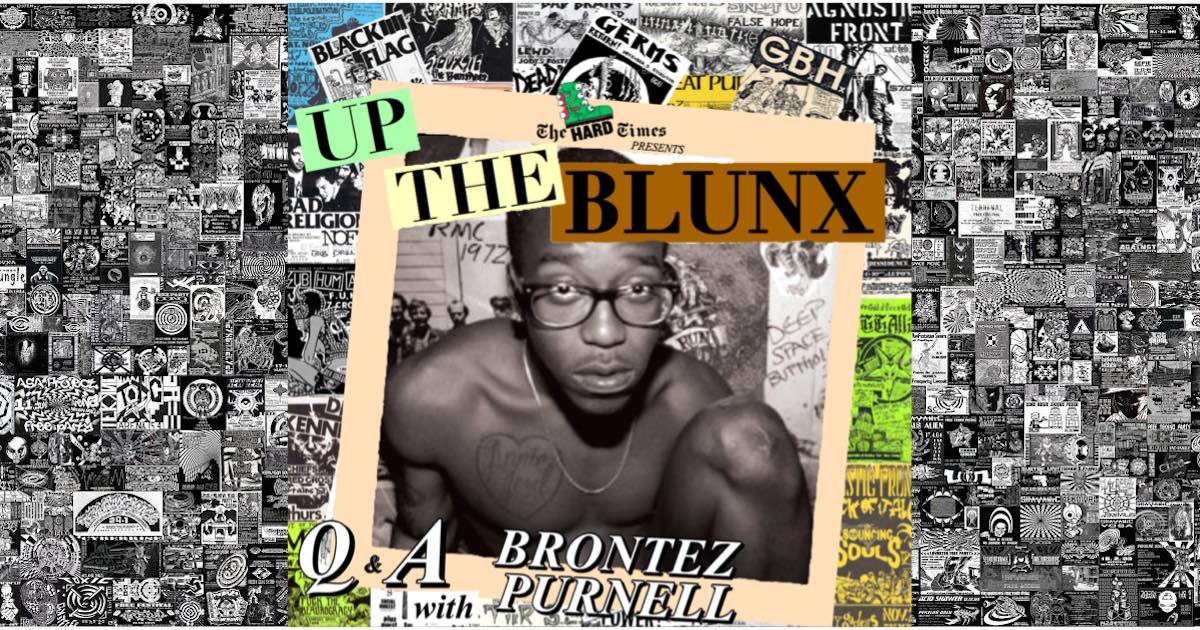 Up the Blunx is a podcast where two Black punks from different walks of life get together to voice their opinions on everything from straight edge to condiments to the police. The show, from comedian Kevin Tit and End It frontman Akil Godsey, regularly features music from Black artists. In this series, we dig a little deeper into the artists behind the music featured on Up the Blunx. This week’s Q&A is with musician, dancer, and author of 100 Boyfriends Brontez Purnell of Oakland, CA’s The Younger Lovers. The song “Forgive Me Philip” off Purnell’s solo White Boy Music EP was featured on episode 17.

When did you get into punk rock and what about it did you gravitate towards?

Back in Alabama in the late ’90s, I was in an all black hardcore band called The Social Lies. We are having a 20 year anniversary release of some songs we never put out this year. I think the thing that ultimately got me into punk was getting to be best friends with Tameka. Being in my ever first band with another Black punk in such an isolated place completely fucking changed my scope and my life.

If you have the blessing of getting to create something magical at a young age, your life basically never fits back into whatever boring old stuffy configuration it was before. I owe A LOT to this moment in my life.

Have you had any experiences in your local scene where you felt like you were treated differently because you were black?

I mean, CLEARLY I would have made more money if I had been some skinny white boy from California — but also I would have no lips or this AMAZING thicc-ity thicc thicc ass of mines, so ultimately it’s all a give and take.

When at Whole Foods I have to often ask myself, “are they staring at me cause I’m hot? or cause I’m black? or cause I’m ACTUALLY shoplifting?” When asked enough, it eventually becomes like this “if a tree falls in the woods” question, that like, clears your mind of all conscious thought…

You’ve got a couple of books under your belt. When did you know writing was something you wanted to pursue?

I made a zine in the mid ’90s that all my classmates loved, and essentially, being an attention whore is habit forming. In my twenties I thought, “if I could just have some really skewed and fucked up version of Carrie Bradshaws life, I would totally take it.” And so I did.

Would you mind telling us about the Brontez Purnell Dance Company and how it got started?

The Brontez Purnell Dance Company started in 2009 with my co-founder Sophia Wang. It’s a punk rock dance company and we still perform. I highly urge for people to watch the movie “Free Jazz” under the company name. I made a lot of the music myself.

Is there any message you’d like to instill in the younger generation of Black punks trying to navigate their way through life?

Oh god, just be a rapper — it’s so much easier. I’m Hellllllllllllla old. Like, I fart dust. My back hurts and carrying amps SUCKS. And like in rock n roll, you split the money three ways. I think young punks should be rappers (or drag queens) cause then all they have to do is show up with their music on a phone and keep all the money.  UNCLE BRONTEZ SEZ: “IM A CAUTIONARY TALE. GO BE A RAPPER️️”

Published in Culture and Podcasts