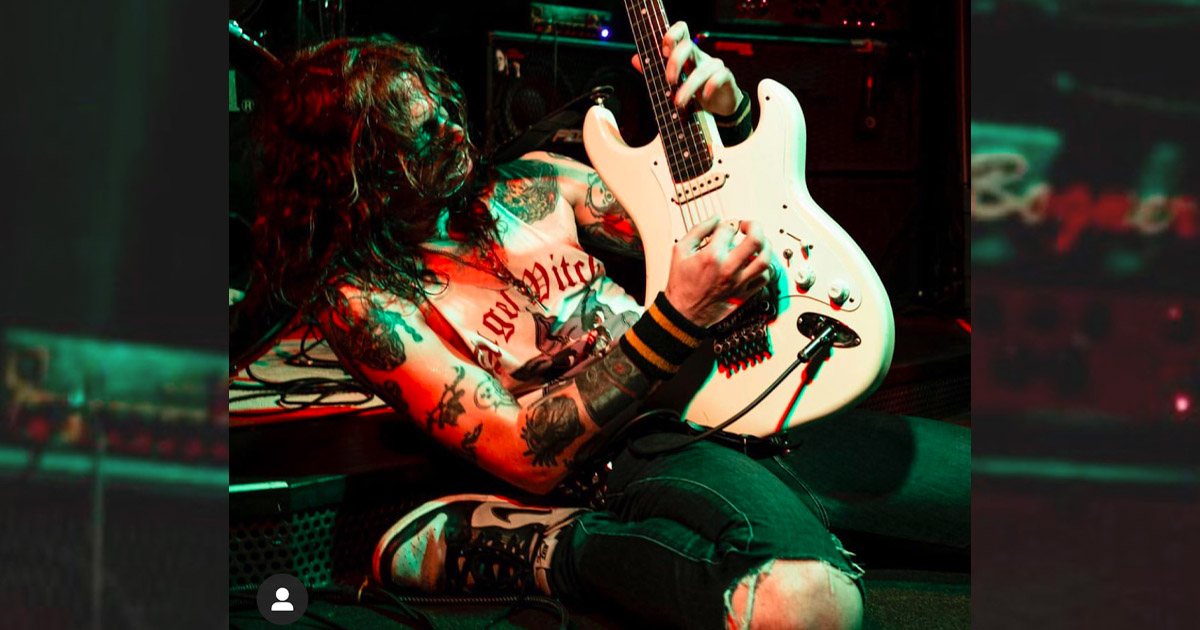 The last thing Trevor William Church needed was a reason to be quarantined with nowhere to go. The singer/songwriter of the refreshingly traditional metal band Haunt (and doomier three-piece Beastmaker) has been hunkered down in his California home studio refining his recording craft and stockpiling riffs like they’re post-apocalyptic currency. While the COVID-19 pandemic has slowed much of the world to a near standstill, Church has sped up his output to an absurd pace.

“I thrive in isolation,” he says over video chat, explaining how he was able to record two full albums and re-record two EPs for Haunt since shutdowns started, while also mixing and mastering releases for Oath (Computer Warrior) and Saber (Without Warning). Haunt’s latest album, Beautiful Distraction, is set to be released April 2nd, with pre-orders available on his Bandcamp page.

Church humbly refuses to compare Beautiful Distraction to his past work. “I’m not the guy for that…” he states, but clarifies that “…it’s my best sounding record,” meaning that it’s mixed and mastered up to his constantly-climbing standards. He attributes this rise in quality to a recent wave of upgrades to his garage/studio.

Modesty aside, Beautiful Distraction does mark an elevation in just about every aspect of songwriting for Haunt. The opening title track is a hook-driven anthem with Church’s guitar mastery on full display. From there, the guitar riffs, licks and solos continue to pile up. Fans of all types of metal will find something they enjoy, because the album has everything you’d expect from an ’80s metal purist.

“I still haven’t gotten ballsy enough to write that ballad yet,” Church admits.

Never one to force it, he takes pride in only making the music he would want to listen to. “The riff for me, it just happens. I don’t want to go into it thinking it’s going to be one thing or another. The music becomes more honest when you don’t think about it too much.”

To ensure that his songs stay true to his vision, he is insistent on never learning to play anyone else’s.

A musical anomaly, Church is DIY almost to a fault. He writes, records, and mixes every instrument for every song, including lyrics and vocals. After self-releasing his last album in six weeks (Flashback in July of last year) he is starting to realize that “do it yourself” doesn’t necessarily have to mean “do everything yourself.”

Free time is something that’s increasingly important to the recent father. On the subject of touring once the pandemic subsides, Church says “I will do one American tour and one European tour; I’m not going to tour too much… I want to be around to see my son hit balls in little league.” After writing fast songs at a breakneck pace since the Fall of 2017, slowing down to be a parent is a luxury he has more than earned. After all, when it comes to parenting, the most important thing is doing it yourself; music is just a beautiful distraction.

Hard Noise: How is it possible that one person can put out 7 albums in the span of 3.5 years? Most bands don’t release that many albums in their entire career.

HN: You are very outspoken about streaming services and the disservice they do to musicians. What’s your gripe with getting .00000001 cent per stream?

TWC: I just don’t like others having dominating control. When I think of Daniel Ek I think I’d rather be friends with my cat’s shit.

HN: With the COVID vaccine rolling out, some states are starting to open up venues to fans again. Can you talk about being able to play shows again and playing some of these new songs live?

TWC: I don’t know, I just look at it like I’m playing my first shows again. Some of the early Haunt shows were terrible. We had a drunk bassist that didn’t take it very seriously. He said he didn’t drink; we took him on the road… wasted every night. So I think now I’m gonna just go “Okay, that was things at its worst live. It can only get better.”

HN: You recently announced a fan club. Promote away!

TWC: There is a fan club on Facebook that is interactive and we are discussing a 7” vinyl club that has no rhyme or reason yet. I have too many riffs and too many ideas. But this is happening and you can see the progress there.

HN: If each of your albums was a smoking method, what would they be?

TWC: Burst Into Flame is a hippy speedball, which is coffee and weed. If Icarus Could Fly is a vape pen. Mind Freeze is a blunt. Flashback is a good old fashioned joint. Beautiful Distraction is a big rip of concentrate.