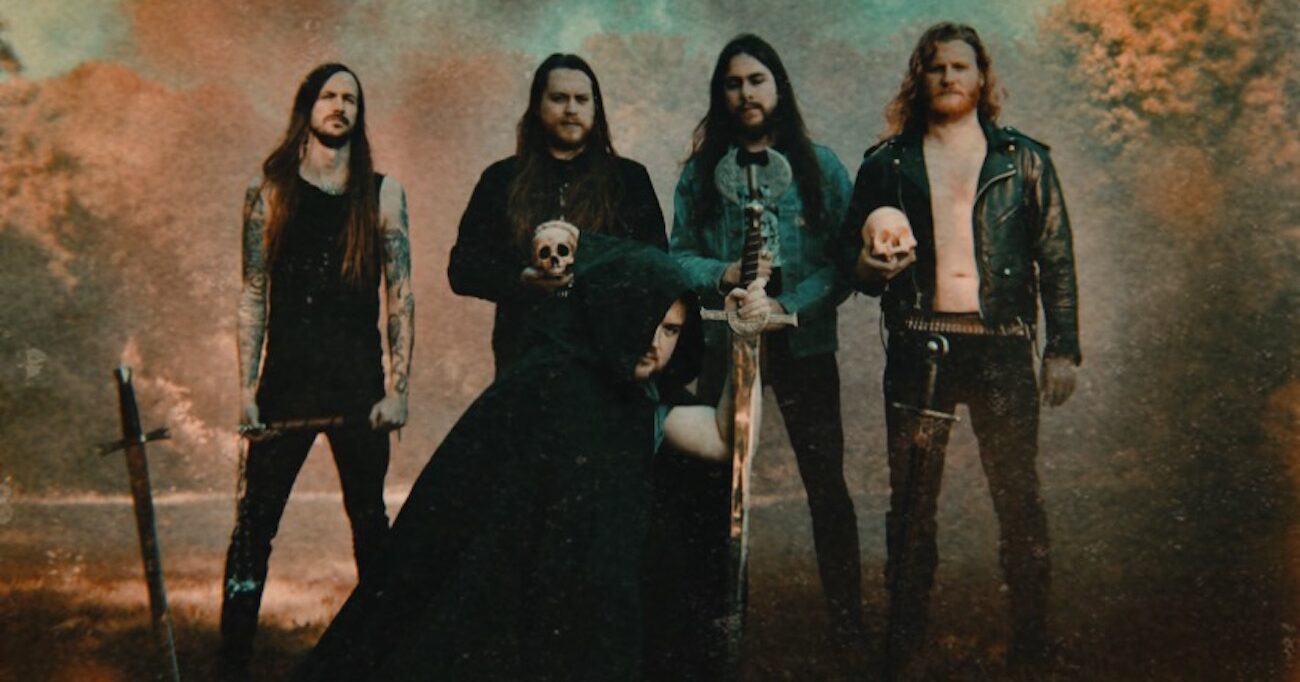 High Command on Conan the Barbarian, the Pandemic Struggle and Classic Crossover

Combining the theatrics of Manowar with the kinetic crossover thrash found on Slayer, early Kreator or Sodom, High Command nails a thrash sound that is both very modern and rooted in classic heavy metal. The band’s debut LP Beyond the Wall of Desolation, released in 2019 via Southern Lord, is emblematic of that High Command sound — destructive yet controlled, focused and furious, delivering a precision claymore blast to fans of razor-sharp punk dressed in sick metallic riffs.

After High Command’s hopes to take their show on the road were dashed by COVID-19, the band released a follow-up 7″ with the venerable Triple B and started to hunker down for their follow-up LP. We spoke to the band about their current status, the influence of a particular Cimmerian and what else they’ve been up to as of late. Details are below.

Hard Noise: You released the Everlasting Torment 7″ via Triple B Records last year. How did that alliance come about and will you be looking to Southern Lord for the next LP?

Ryan McArdle: Our bass player Chris and Sam over at Triple B go way back. Some of our previous bands have done releases with the label in the past as well. The pandemic blew all our plans to shit with our debut LP Beyond the Wall of Desolation so we figured doing a little EP with Triple B would be a good way of getting our music in front of a different crowd in the place of touring. Sam/Triple B has done a great job of curating a roster of some of the most exciting and eclectic bands out right now, so it was definitely cool working with him on this.

Without giving too much away, Beyond the Wall of Desolation is definitely just the beginning of our alliance with the mighty Southern Lord. Many more tales of bloodshed and sorcery loom ominously on the horizon.

Has the band kept busy during the pandemic? Or have you had trouble concentrating? How has the band coped with the loss of live music? Has the pandemic affected the band personally as well?

To be honest I struggled a lot, creatively speaking, in the beginning of the pandemic. I think the general sense of malaise once the isolation set in really put a damper on any sort of productivity. I know a lot of really talented musicians that can put whole albums together by themselves in their bedrooms, but I am definitely not one of them.

I needed the boys to bounce my ideas off of, and I think it kinda goes the same for everyone else in the band. We started as an excuse just to hang out and drink beers — it doesn’t feel right without that element. Plus I’m basically computer illiterate. I can barely figure out TurboTax never mind programming drums in Garageband or whatever.

Regarding the pandemic in general, we are kind of in the same boat as everyone else, but definitely not nearly as bad as some people have it. Day jobs got screwy in the beginning. Our other guitar player Mike and I also bartend at night so that was pretty much a bust for most of 2020.

We had Everlasting Torment kind of written before the pandemic hit so we were able to get together over the summer in order to fine tune it and hit the studio. We also did a livestream somewhere in there as well. Without getting too personal, a sudden death in my family in the last months of 2020 really inspired me to get back to High Command and guitar playing in general. Now that we are all able to get into a room together on a regular basis, we are on a roll for sure.

Crossover thrash is a timeless yet well-worn territory, and younger bands like you, Enforced and Power Trip (amongst many others) are putting a new spin on the genre. What are your personal favorite releases within that world and why? Do you identify more with punk or metal?

Off the top of my head I think High Command owes a big debt to Cro-Mags’ Best Wishes and Alpha Omega. Leeway’s Born to Expire and Desperate Measures are also phenomenal — the mosh riff in “Unexpected” is a shining moment of what Crossover should be. COC’s Animosity is all killer and much like Napalm Death’s Scum, each side is basically a different record. Of course you gotta mention DRI’s Crossover, that put the official stamp on the genre. I’d also think that Integrity’s first few releases would fit nicely in there as well. The Icemen, Crumbsuckers…basically anything New York is solid gold.

I had always loved metal, but I kind of aligned myself with the punk scene when I was younger because that was where the party was at more or less. At basement shows or warehouses, no one would bat an eye at a 15 year old kid holding a 40. The metal shows were at the bars or big concert halls with tons of security.

I remember getting a mix cd from some of the older dudes in the scene and in between the Toxic Narcotic and A Global Threat songs were tunes from bands like Sacrilege, English Dogs, and GISM that clicked right away. My whole life I had liked punk and metal separately and now I was hearing for the first time the genres blended masterfully together. It was game over after that.

I’d like to think that High Command is through and through metal, but we are all punks at heart and we can’t help but let that shine through sometimes.

A lot of the lyrical content and mentions are of a fantastical nature. What are some books or films that helped spark inspiration?

As far as movies: Conan The Barbarian, Conan the Destroyer, Deathstalker, Beastmaster, Red Sonja, Kull The Conquerer, The 13th Warrior, The Lord of the Rings Trilogy, The Sword and Sorcerer.

Swords and Metal have gone together like peanut butter and jelly since the dawn of time. Truly a match made in Crom. We take a lot of cues from traditional heavy metal (Dio, Manowar, Mercyful Fate), a lot of the first wave black metal (Hellhammer, Celtic Frost, Bathory) and even crossover like the aforementioned English Dogs and Sacrilege. Metallica had a lot of Lovecraft- inspired lyrics as well.

What is the band currently working on?

We are currently locked away in the High Command fortress working on LP two. It’s still way too early to give any sort of definitive timeline, but rest assured sick-o mode riffs are being forged as we speak. Since High Command lies largely in the conceptual realm, half the battle is figuring out what kind of record this will be. I think we hinted at some possibilities with BTWOD that we are a lot more comfortable exploring now as we progress as a band.

Musically speaking, what do you think is the greatest loss for High Command in the wake of COVID-19?

We had a lot of really great opportunities lined up for 2020 that didn’t happen but to be honest I try not to dwell on it, especially in the wake of the unfathomable amount of human suffering and misery that occurred over the past 12 months. Heavy Metal never dies. It’ll come back at some point and when it does, you better believe that there will be nowhere in the world that is safe from High Command.

The last show I played and attended are one in the same. It was us, Fuming Mouth, Final Gasp, Raw Radar War and Maniac at the Middle East in Boston back in February 2020. Looking back, I couldn’t have asked for a better one to go out on. Every band was incredible and I feel like every single friend was there. Speaking of which, Final Gasp is about to have an insane EP come out on Triple B that is going to explode people’s heads and Fuming Mouth’s Beyond the Tomb is one of the best things to happen in 2020.

I don’t know if I can pin down one single thing I miss most about live music. Maybe drink tickets? But for real, I miss it all. In general just the hanging out, laughing, carrying on, that’s the kind of stuff I miss. I used to miss how loud it was until I watched Sound of Metal the other week and had a full blown panic attack. I dream of the day where a shirtless sweaty guy can jump on my head again safely.