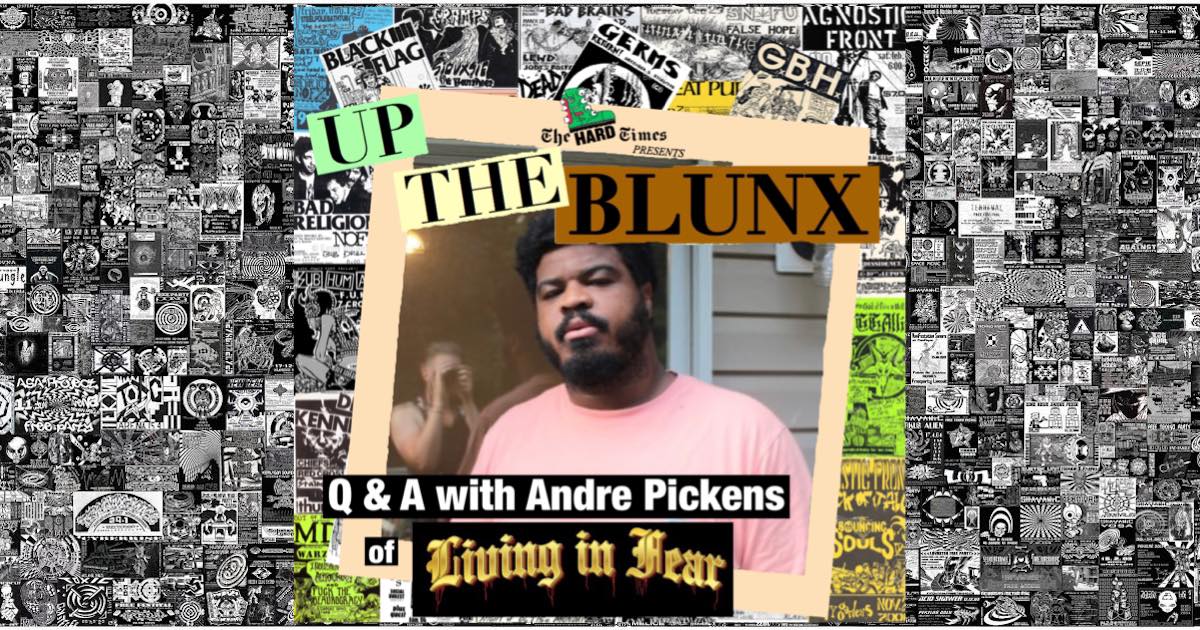 Up the Blunx Featured Artist: Andre Pickens of Living in Fear

Up the Blunx is a podcast where two Black punks from different walks of life get together to voice their opinions on everything from straight edge to condiments to the police. The show, from comedian Kevin Tit and End It frontman Akil Godsey, regularly features music from Black artists. In this series, we dig a little deeper into the artists behind the music featured on Up the Blunx. This week’s Q&A is with Andre Pickens of Atlanta’s Living in Fear, whose song “Burn” off latest release “The Coward’s Path Ends Here” was featured on episode 21.

How old were you when you realized punk/metal was something you were into?

I was 14 when my friend Ian let me borrow his dvd of AC/DC Live at Donington. I watched it probably three times over the weekend, and by the end I was in love with rock and roll. I got on Wikipedia, started at AC/DC and just clicked links, learning more and more about rock and eventually metal. I was stealing everything at this point. I was on Limewire downloading anything that looked interesting. That’s when I got into a lot of the classic metal stuff like Metallica, Judas Priest, Motorhead, etc.

Trapped Under Ice is what really sent me down the Hardcore road. This was back in the late 2000’s when the metal influence in popular hardcore wasn’t as prevalent as it is now, so I used to get some flack for listening to older metal and not knowing much about punk or hardcore. I got Trapped Under Ice’s demo off a blogspot (sorry) and that changed the game for me. I found the sound in hardcore that I really resonated with, and it got me to start going to shows and getting involved. Watching TUI’s rise is what showed me that you didn’t need to be some superstar to play music. I took in a lot of the hardcore ethos and I’ve just carried that with me ever since.

How did Living in Fear get started?

Living in Fear was started by Curtis a few years ago. He wrote and recorded the songs on his own for the first releases and the band played shows with a rotating lineup. Wayne and I joined the band about a year ago and the lineup has solidified since then. We put out “The Coward’s Path Ends Here…” last year and have some new stuff coming soon. We’ve still been working all through the lockdowns, and we’re counting down the days til we can get back out there and show the new stuff off. Haterz be Damned.

Do you feel a sense of responsibility towards the younger generation of Black Punks?

Sure. I’ve got to make sure that I’m not letting people get away with being racist around me because if I let it slide then they might get comfortable and start to think that’s okay. I won’t have someone end up pushing a younger black kid out of the scene because I gave them an inch and they decided to take a mile. Honestly though, the younger generation is holding it down just fine without me. I see more black people creating and enjoying hardcore now than I ever have before.

As long as we keep getting out there and playing music and making ourselves known then it’ll continue to get better and better. There’s so many bands with black members out here doing the damn thing, it’s inspiring. I hope that by being out there on stage I can convince someone who might be looking at hardcore with apprehension to get more involved. So I don’t know if I’d call it a sense of responsibility, but more like a sense of camaraderie, where I want to see Black Punks do well at everything they want to do. If I can help them do it, even better.

Yeah. There’s been some suspicious situations and out of pocket comments that I’ve had to shut down, but mostly it’s been a positive experience for me. There’s an inherent connection between a lot of the black people in these scenes, and there’s a long history of black people being a part of hardcore and figuring out how to use their voices in the scene. Bad Brains was one of the first all-black bands I saw really shredding and playing aggressively, and it opened a lot of doors for me and the fact that they’re held in almost universal high esteem is a very positive trait of hardcore.

Punk and Hardcore has a reputation of being an inclusive scene, and even though it fails a lot of the time, I do think the scene is on the whole more accepting than something like metal or hard rock. Another positive trait about hardcore is all the different philosophies and politics that you’re exposed to through the music. I don’t agree with everything I hear, but learning about different ideas and ways of life is a good thing.

Don’t let shit slide. If someone says or does something you don’t like, DO NOT be afraid to push them on it. There’s always gonna be racist and ignorant dickheads, and I know it’s exhausting, but try not to let it slow you down too much. Even with the shitty negative people in the scene, don’t be afraid to go up to someone or reach out and try to make friends. There’s a lot of people out there who will appreciate you and just want to see black people enjoying life. Also, start a band. Thanks.