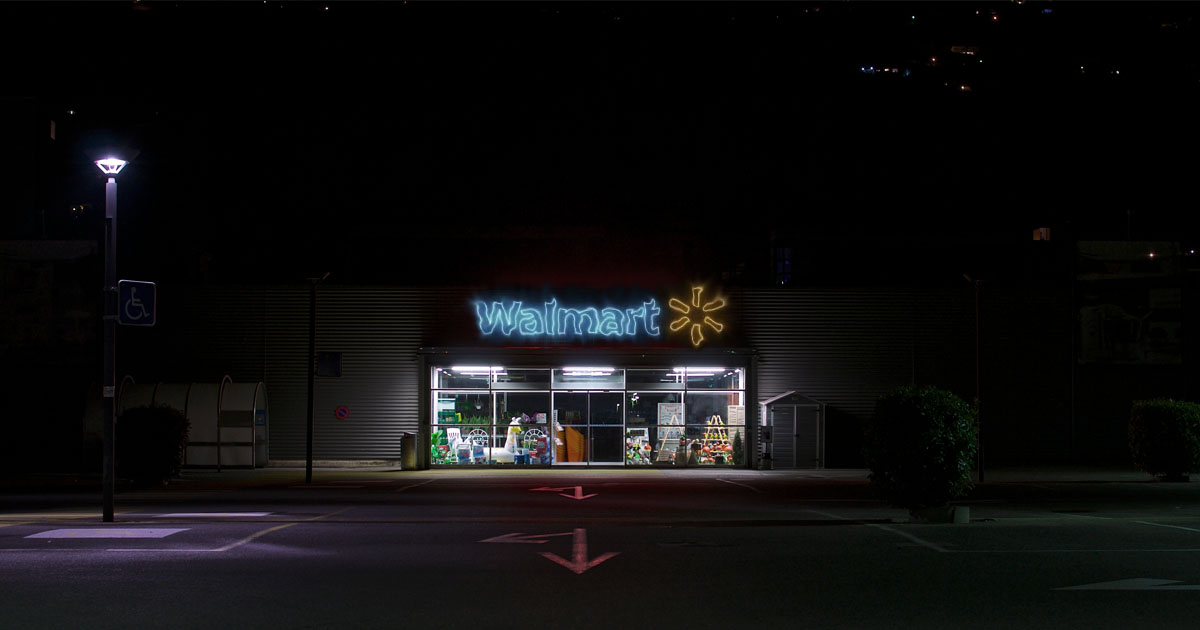 Save yourself. Live better.

Lucy didn’t think there could be anything worse than going home for the holidays. It meant taking time off she couldn’t afford, just to spend half of it in transit and half avoiding her mother’s glare at the dinner table—a plea (albeit, an aggressive one) that Lucy wouldn’t get involved with any political discussion and “ruin the holiday”… again. But four Millers in, her aunt’s cop husband started blundering through a string of half-remembered talking points that all started with “those people.”

She sure as hell didn’t come halfway across the country to listen to some forty-eight year old prick grumble a bunch of racist shit at dinner because the Patriots lost. Voices were raised. A spoon flashed in someone’s hand like a knife.

One thing led to another, and Lucy found herself driving to a Wal-Mart at eight o’ clock on Christmas Eve to pick up the whipped cream her mother “forgot,” which was fine by her. It was time for the annual “getting closer to thirty, and still no husband” conversation, and she was more than happy to be absent for it. Until the moment she walked out of the darkness of the parking lot and into the pulsing, sick light of the Wal-Mart, she couldn’t imagine anything worse.

It was not the strange glow of the fluorescent lights that first caught Lucy’s attention, but just how empty it was. It was Christmas Eve, so she hadn’t expected it to be packed. But she had never been in an empty Wal-Mart before. It was the only place open for miles. Surely, someone else had forgotten something, or run into some sort of emergency. But no. Save the cashier, and the security guard conversing with him, totally empty.

Their eyes fixed on Lucy as she passed, necks snapped towards her at attention—like rabbits, frozen, waiting to see if she identified herself as a predator, or simply an element of their surroundings. Lucy smiled to be polite. It was Christmas, after all.

That should’ve been when she noticed that this place felt wrong. But it wasn’t. Nor was her discovery that the section labeled “Dairy” was full of free weights and yoga mats. Having shoplifted from quite a few Wal-Marts in her day, Lucy had a pretty good handle on how they’re supposed to look. Here, though, there was a stack of graphic tees neatly folded atop bags of frozen carrots and peas. The sign above the freezer read “desserts.” The lights were beginning to give Lucy a migraine. Had she not been focusing so intently on keeping her jaw unclenched, Lucy would have realized that her nose had started to bleed.

Suddenly, Lucy felt nervous—as if she was being watched. She turned to look behind her and almost touched noses with the stout, wide-eyed woman in a blue vest, and jumped back instinctively. The woman did not react.

She continued to stare at Lucy, as if looking through her, and asked, “Is there anything I can help you with?”

She flashed a smile that made Lucy feel like fluorescent lighting. It was disorienting; illuminating, but still cold and lifeless. Lucy hated those lights, and she wanted to hate that woman’s smile. But instead, it filled her with dread. She couldn’t help but feeling that if she asked this woman for help, something terrible would happen.

Lucy shook her head “no” and hurried down the aisle. Though she did not turn back, Lucy could feel that the woman was no longer smiling.

The aisle Lucy found herself in was marked “school supplies.” Bags of flour, boxes of pasta, and other dry goods lined the shelves. Though Lucy saw straight through to the other side before entering, the neat letters that spelled “school supplies” seemed to twist and grow the farther she walked. She heard a low grumbling, and turned around. A man pushing a shopping cart, piled high with clothes, electronics, and home goods muttered to himself, as he reached for a box of rotini on the top shelf. He was gaunt, and looked exhausted.

“Excuse me, can you help me?” Lucy said, the optimism she might’ve had already sapped away by the man’s troubling demeanor. When he looked up, Lucy noticed that his eyes were red and swollen, as if he had been weeping for a very, very long time, and decided she had been right not to hope.

The man stared at Lucy with blank, instinctively fearful eyes for a moment. But when she took a step towards him, emotion rushed back. His eyes widened and his upper lip began to curl. The vein in his forehead throbbed. Suddenly, the hate in his eyes was replaced by panic.

Before Lucy could react, the man tore down the aisle, packages of socks and a toolbox falling from his cart as he went. On impact, the tool set opened. Instead of the screwdrivers and measuring tape advertised on the packaging, the case contained nothing but sawdust. A cloud of the stuff floated out and Lucy stumbled trying to avoid breathing it. She began to feel sick. The boxes of pasta were full of it, too.

The next time Lucy saw someone pushing a cart, she did not approach them, or make her presence known. She knew now that to go unnoticed was best, though other things were starting to elude her.

“What did I come here for?” she thought, “A sale? No. Whipped cream. For dessert.” Her mother probably had whipped cream in the cupboard. She probably only sent Lucy out to buy some, because she couldn’t handle a little conflict. Lucy decided that she resented her mother. And she was damn well determined to get the fuck out of this Wal-Mart so she could spit it right in her stupid face.

The security guard began to walk towards where Lucy thought the entrance was at a leisurely pace. If she convinced herself this nightmare had an end, maybe it would. Maybe she would get to the cash register, apologize profusely, rack up a bit more debt, and head back to her parents’ house. She knew she was foolish to pretend. She recognized nothing on the shelves they had passed, and she did not know hope.

“Well then, come along now.”

The guard had slowed, closing the gap between them. Lucy had been dawdling, distracted by the shelves, and the way that they seemed to warp, craning themselves towards her ever so subtly— the same way that a student might cheat on a test, carefully, to avoid the paper’s owner, as well as the teacher’s eye. She felt like something to be studied. She didn’t like it, and was sure the security guard could sense her apprehension. She decided to drop the act.

“This isn’t the way to the register,” Lucy said, “so where are you taking me?”

The guard missed a step, taken aback by the idea that she was able to do anything but follow.

“Not the ones in the front,” he snarled, “too close to the doors. Too easy for you to get away. And we’ve had runners before.” And as if he could sense Lucy’s apprehension, he added, “Sorry. Store policy.”

What he didn’t know was that Lucy had been stealing from Wal-Mart since she was 15. She’d stolen from at least a dozen, a dozen times over, including this one. She’d been caught before, not often, but caught nonetheless. This was not store policy. The security guard was counting on complacency. And that was a mistake.

Her head pounding, Lucy became overwhelmed with a feeling that this was to last forever. Her vision began to blur. The security guard began to laugh.

Lucy yanked the fire extinguisher off of the support beam besides her, and brought it down on the Laughing Man’s head—which was much softer than one would expect. For a moment, Lucy worried that she had killed him. But he continued to laugh.

The Laughing Man stopped for a breath, and wheezed. “Oh. You weren’t really going to pay for the damages, were you?” he said, flatly. He turned to face Lucy, slowly, and she cried out.

The side of the face where she hit him had began to crumble, collapsing in on itself like wet sand. He didn’t seem to notice as bits sloughed off of his face, falling to the floor. The Laughing Man’s entire face slumped to the damaged side, and his speech became slurred.

“I guess I was right—you ARE a criminal.”

The lights overhead grew brighter and brighter still. Lucy’s migraine intensified. This would not stop. This was to be forever. The guard’s laughing became nasal and arhythmic. His mouth, gaping. As it went, it grew louder and louder. Lucy began to feel nauseous.

If this was to be her fate—forever, in this place—Lucy refused to share it with someone whose laugh sounded like that. She raised the fire extinguisher over her head, and brought it down hard. Again and again, until expectation and reality met.

And suddenly, the shelves were shelves again. They no longer reached out for her. A pile of sawdust was all that was left of the Laughing Man, and it shuddered as if trying to draw breath.  Sawdust does not breathe, Lucy was certain of that. Lucy was certain, again. Certain that she hated Christmas. Certain that she had been wrong before; there were worse things than spending it with family. She could see the doors in the distance. She was certain they would not open.

Mark Bouchard is a contributor to The Hard Times who recently edited & contributed to the comic anthology Everything is Going Wrong: Comics on Punk and Mental Illness. In our review, we called it “a dense and vivid kaleidoscope of experiences by musicians, makers of comics, and punks of all stripes.” All proceeds from EIGW go to The Trevor Project and MusiCares.