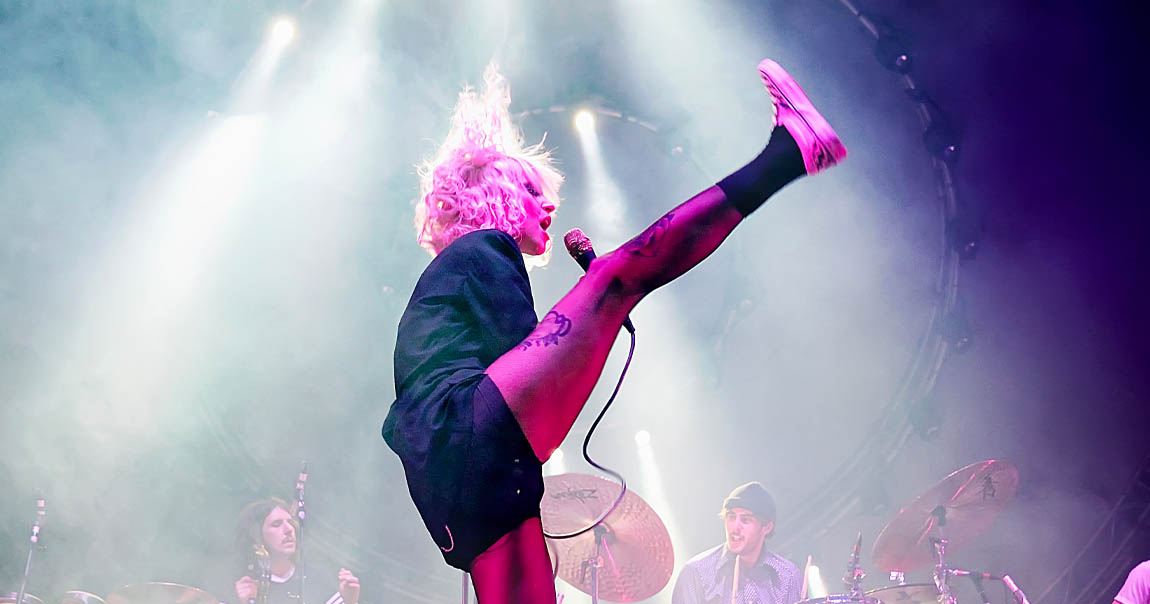 We tend to think of Renaissance men as rare geniuses from bygone eras, but true polymaths are not a matter of ancient history—right here in 2020, there are people who do it all, jacks and jills of all trades who are excelling in multiple, often completely unrelated fields. In particular, the heavy music world is home to lead singers who modernize and revitalize the idea of a Renaissance man, showing us that we don’t have to settle for a single, unwavering path through life. If you’re considering a big career change, or wondering if you have time for a new side hustle, our favorite vocalists prove that it can definitely be done.

If modern rock were a color, it would almost certainly be black—dark, brooding, and perhaps too self-serious. But against the backdrop of countless black band tees, Paramore’s Hayley Williams is a refreshing splash of fiery, exuberant color. Her signature orange and red hair demonstrates that a vibrant aesthetic can be every bit as loud and impactful as an electrifying guitar solo.

And in 2016, Williams teamed up with her longtime stylist and makeup artist Brian O’Connor to create Good Dye Young, a hair dye company dedicated to cultivating community and confident self-expression. They offer all kinds of semi-permanent hair color products, wear-and-wash Poser Paste “hair makeup,” and plenty more. For anyone hoping to make a statement or break the mold at their next heavy music show, Hayley Williams is ready to help you dye happy.

It’s not exactly unusual to find a punk band that takes issue with authority. But the legendary Bad Religion back up their rebellious lyrics with the brainpower to talk science and religion with punks and professors alike. In fact, lead singer Greg Graffin has a master’s degree in geology and a Ph.D. in zoology, and has written two books on faith and evolution. He has even been a lecturer in life sciences and paleontology at UCLA, and taught in the Department of Ecology and Evolutionary Biology at Cornell. Not too shabby, especially since Graffin is still writing songs, recording new music, and touring with Bad Religion, who released a new album just last year—and whose total discography includes over 300 songs.

Reading Andrew W.K.’s résumé is like walking through a hall of funhouse mirrors—everything is totally improbable, completely absurd, and likely to make you laugh. Let’s start with the basics: He’s written a number of genuinely insightful advice columns over the years, including one for a Japanese magazine and another for VICE (“Andrew W.K. on the Glory of Tacos” is a memorable highlight). The self-proclaimed King of Partying has also hosted multiple TV shows, voiced a character in Fallout 4, and set a world record for Longest Drum Session in a Retail Store (24 hours straight, by the way).

He’s also a passionate motivational speaker, having offered his deepest reflections everywhere from New York University to a My Little Pony convention, where he pondered a question that has puzzled philosophers for millennia: What would Pinkie Pie do? He later called the convention “the most intense experience of my life”—and for a man who has dedicated himself to the pursuit of partying, that truly is saying something.

4. Keith Buckley, Every Time I Die & The Damned Things

Some people just have a way with words, and Keith Buckley is one of those people. First off, he’s the vocalist and lyricist of metalcore mainstays Every Time I Die and heavy metal supergroup The Damned Things. But once upon a time, he was addressing not a crowd of screaming fans, but a hopefully quieter classroom of teenagers. After graduating from the University of Buffalo with a degree in English, he spent a year teaching Shakespeare to high schoolers.

Since then, he has written for a number of websites, including—hey!—The Hard Times, penning such gems as, “Child of Rockabilly Couple Constantly Wondering What the Fuck Is Going On.” On a more serious note, he’s also written two novels, 2015’s Scale and the more recent Watch, which we read and loved.

Once the frontman of ‘80s hardcore outfit Whipping Boy, Eugene S. Robinson is now at the helm of underground art rock icons Oxbow and up-and-coming rockers Buñuel. But when he’s not delivering an urgent, impassioned vocal performance, Robinson is working as the Editor-at-Large at OZY, a media company based in Mountain View, California with a global audience of 50 million people. Robinson specializes in bringing unusual or untold stories to life, and writes the always-enlightening “Sex with Eugene” column for the site. He also hosts the OZY Confidential podcast, where he interviews fascinating figures living at the fringes of society—and even shares his own history with competitive bodybuilding.

It’s unclear how or when Corey Taylor finds time to sleep. In addition to fronting heavy metal legends Slipknot and Grammy-nominated rockers Stone Sour—and working on an upcoming solo project—Taylor is a prolific author, having written no fewer than five books in the last decade. Between the covers, he offers thoughts on the Seven Deadly Sins, describes his experiences with the paranormal, and even examines what it means to be an American.

As if that weren’t enough, Taylor is also taking his talents to the screen. He had a cameo role in the modern cinematic masterpiece Sharknado 4, and performed the monstrous roars of the Fisher King in a 2015 episode of Doctor Who. Taylor also has a deep love of horror movies, appearing in the recent ‘80s horror documentary In Search of Darkness, and even writing his own horror screenplay. Who knows—maybe fellow frontman and film director Rob Zombie will take on the screenplay as his next horror project. Hey, a guy can dream.

Given her provocative onstage persona, some may be tempted to dismiss the Butcher Babies’ Carla Harvey as all shock and no substance. On the contrary, she’s a licensed mortician, and draws and sells a wide variety of irreverent, often macabre designs through her website. She has also found a way to combine her artistic inclinations with her experience with death and dying—she works as a creative grief coach in Los Angeles, helping others process loss by engaging with the arts.

If you think there’s something especially savage, perhaps even inhuman about Otep Shamaya’s growling, you’re right on the money. In fact, she has performed voiceover work for a number of big-budget fantasy and horror projects—for example, she did the voices for various creatures in The Hobbit: The Battle of the Five Armies and also for the Infected in 2013’s The Last of Us video game. But in true Renaissance woman fashion, she’s also a passionate painter, and has released several volumes of poetry.

From their songs like “The Coffin Is Moving” and “Let’s Bury The Hatchet…In Your Head” to their downright cinematic music videos, Ice Nine Kills clearly loves everything about horror movies. But frontman Spencer Charnas isn’t content to explore that passion through music alone—he’s also started his own horror lifestyle brand called Kleaver Klothing. They’ve got a massive selection of shirts, tanks, hoodies, and hats for both men and women, plus shoes and even a home goods section called “Blood Bath & Beyond.” And of course, they’re based in Salem, Massachusetts, the sinister site of the infamous 17th-century witch trials.

As the frontwoman for both metal band Red Handed Denial and post-hardcore supergroup CrazyEightyEight, Lauren Babic sets a new standard for crystal-clear singing and brutal, gravelly screaming. And she’s not keeping her talents to herself—in her spare time, she offers vocal lessons to her fans via Patreon.

“But how do I know she’s a good teacher?” you may be wondering. Fear not, vocal novice, for Lauren holds a Bachelor’s of Education degree from Nipissing University in Ontario, and is an OCT-certified teacher. She’s qualified to teach history, special ed, and more, including—you guessed it—vocal performance.

Starset’s live performances often involve science fiction-inspired space suits and electronics that look stolen from the set of Minority Report. So maybe it’s no surprise that lead singer Dustin Bates has a bachelor’s degree in electrical engineering and a master’s degree in avionics engineering—and he was working on a Ph.D. when he got a record deal. He’s even done research for the Air Force, and used to be a teacher at the International Space University. Those days are behind him now—but he still uses those engineering skills to work all that fancy equipment during shows.

Look, this isn’t to say that we should all overcommit ourselves, or burn out on a million projects at once. But if you’re trying to decide between two very different goals, take heart—if the lives of these vocalists are any indication, maybe the best of both worlds is in your future.