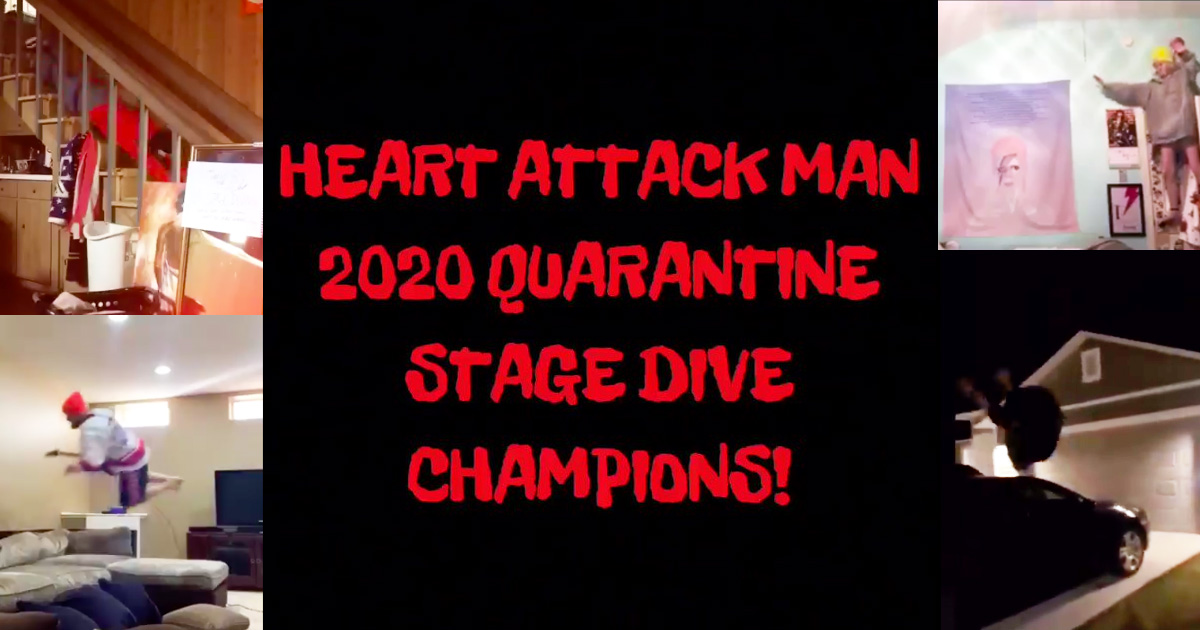 Sports are a thing of the past in the COVID-19 hellscape in which we’re living, unless you’re Florida’s latest essential business: World Wrestling Entertainment. Ohio rockers Heart Attack Man were hit with a double whammy when their North American tour supporting Knuckle Puck was canceled early. They lost both music and sport, leaving them with a lengthy drive home from California and eight extra ribbons for the micro championship they’d been holding nightly for “Stage Dive Champion.”

The award would be given out nightly after the band’s set, but without that venue to deliver, the band took the competition online. The barrier to entry was lowered from paid ticket to phone and social media. Entrants just needed hashtag #HAMMYQUARANTINE, so the competition went worldwide.

Well, sort of. Anyone could enter, but the winners all happened to hail from the US. We spoke with them all about the prestigious honor. Not since the Myspace top 8 has being a part of a carefully curated octet produced such bragging rights.

THANKS SO MUCH TO EVERYONE WHO PARTICIPATED IN THE @HAMMYQUARANTINE CHALLENGE! THIS WAS SO MUCH FUN! HAD A GREAT TIME WATCHING ALL THE SUBMISSIONS, BUT I HAD TO NARROW IT DOWN TO EIGHT RIBBON WINNERS, SO WITHOUT FURTHER ADO: pic.twitter.com/4yzVqmlTvB

As you can see in the above video compilation of winning entries tweeted by Heart Attack Man, the strategy for these leaps was much more like a diving competition than your standard show, where the goal is simply to get up and off the stage with as much air as possible. No, these athletes needed to strategize to come out on top creatively. For Troy Patton, a 19-year-old from Houston, that realization almost hit too late, but he added a ribbon-clinching flip last-minute.

Flips were a common means of standing out. Fellow Houstonian Rylee Manahan, 19, did the same off a doorknob onto her bed, inspired by a childhood activity only executed after her parents went to sleep.

“I put on my hype up song, ‘Oblivion’s Peak’ by Knocked Loose, and mounted my doors,” explains Manahan. “When I flipped, it felt like I was about 10 feet in the air, but upon watching you can see I only got about 3 inches of air. I still, to this day, have neck and back pain from the impact.

Megan Jamison from Enfield, CT could be an honorary fourth member. She found herself flipping and flopping after throwing her body down the stairs with great abandon. The 20-year-old came out of it with a black eye and cut eyelid, though she takes it in stride, slapping an “lmao” at the end of the admission.

Southwest from her in Clemson, SC, 15-year-old Mikey Lee also took to the stairs, though they slid down to avoid injury (beyond carpet burn), belying the fact they were the youngest champion with logic and reason.

A couple of winners brought the concert to them, wielding guitars as props or more. Liam Eadie, 19, embodied that “more” when he played along to Heart Attack Man’s “Sugar Coated” before leaping onto a couch. With the music and dive, his Westerville, OH house was host to the closest thing to a concert you could get in these COVID-19 times.

Veteran diver Spencer Braithwaite, 24, had already won a ribbon when the tour came through his home of Salt Lake City, UT. His second award-snatching performance was at home, where he hopped off his roof and smashed a guitar — an experience he recommends to everyone.

“It was such a blur, but it was so fun and cathartic,” says Braithwaite. “This is my magnum opus on Twitter, honestly, and to have a ribbon commemorating it is life-changing. I’m now a two-time stage dive champion after Heart Attack Man’s winter tour!”

Guitars and skulls weren’t the only things cracked here, though. There’s only enough room for one more winner, which no doubt broke some hearts from among the roughly 40 entries. Greeneville, TN 18-year-old Jake Barker closed out the podium and took the destruction one step further. Soundtracked by Heart Attack Man’s “Sugar Coated,” he dove onto his dorm room’s rickety bed, knowing full well it would break. Even having to sleep on a mattress on the floor and deal with an “extremely upset” resident assistant couldn’t break his excitement.

“It feels good knowing that I won the challenge as if I were channeling some barbarian ancestor, except instead of cracking skulls it was cracking open Four Lokos and breaking my bed. It’s an immense source of familial pride and will be handed down for generations.”

This energy was echoed by his fellow winners. Its inverse, jealousy, is no doubt felt by countless other HAMMY stans across the world, now even more anxious for concerts to return, so they can prove their worth on — or rather, flying off — the stage.