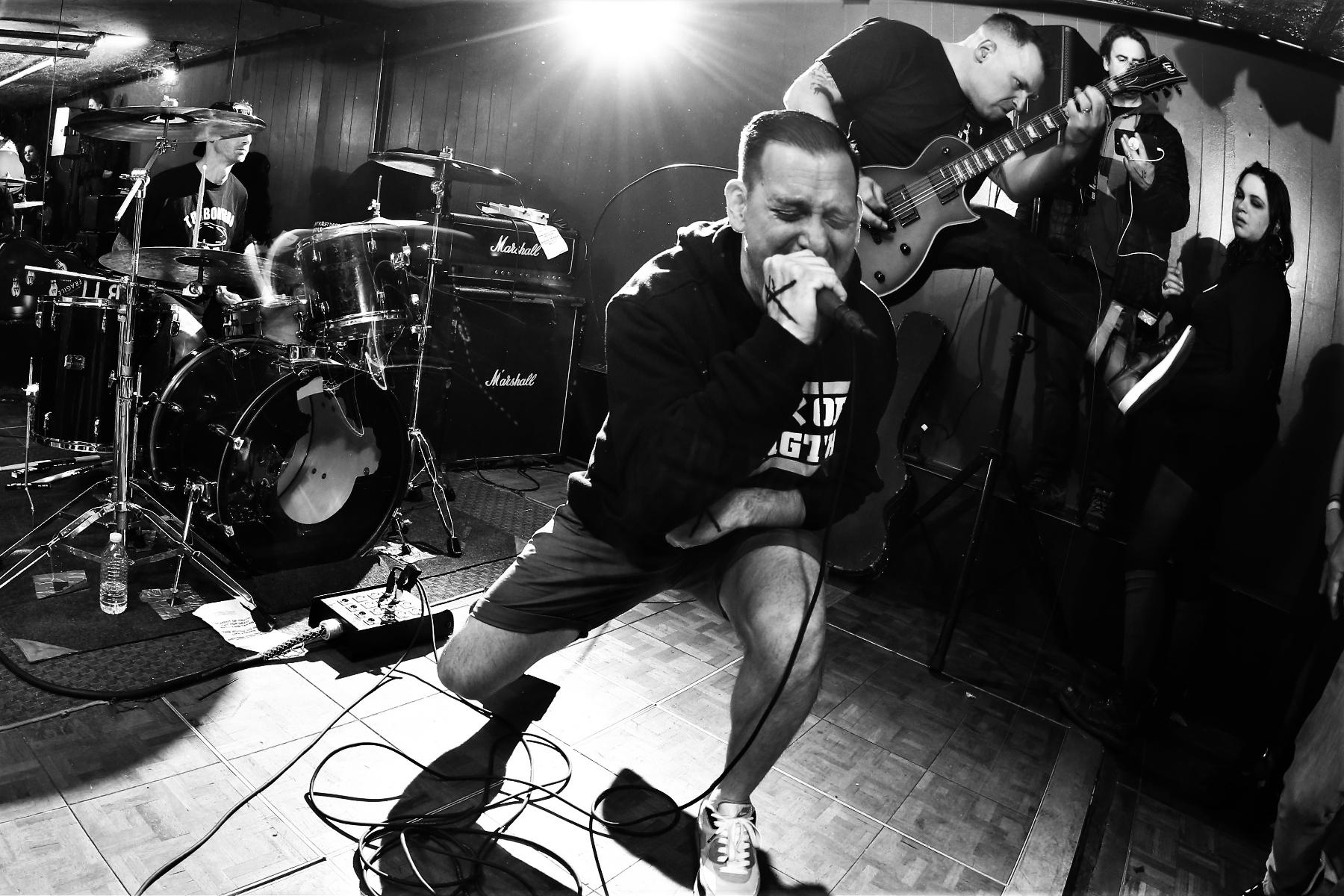 Andrew Kline has been part of hardcore punk for more than 30 years, and between the legendary West Coast crew Strife, his vocals in Berthold City and guitar in supergroup World Be Free, he still has his hands full as a performer. With the world in turmoil and live gigs at a standstill, Kline has still made a dent in the hardcore community in 2020 via WAR Records. The label, founded in 2015, has been highly active this year, releasing the new Reserving Dirtnaps EP, a Bent Blue cassette, an Ironclad cassette, a Ways Away 7″ and even a new 7″ from Terror.

Between the new World Be Free EP One Time for Unity (out now!) and WAR’s many releases, we caught up with Kline to discuss the label and its roots, and to corner him about his favorite project by each member of World Be Free. The results of our conversation are below.

When you started the label, obviously it started with your own release. Was there always an idea to release other artists, or did it sort of blossom and move into that direction?

I think being involved in the music scene, I’ve always wanted to start a record label and there was talks of starting one in the early 2000s — just something that I always had in the back of my head and never quite pulled the trigger on.

Back when Strife was recording Witness a Rebirth, I basically took control of the whole recording process. We recorded the bulk of that album in Brazil with Iggor Cavalera on drums. So me and the producer, Nick Jet, flew out to Brazil, booked the studio we recorded while we were there, hired a team to film a short documentary on the making of the LP and I paid for the entire recording. We came back to LA to finish it. So basically at that point, we were looking for a label and we gave the record to a label to put it out. In my head, I was thinking to myself “Wow, I actually did every marketing component, I paid for the album and then I kind of gave the record away to recoup the money spent. Why didn’t I just do this?”

When we were on Victory, being on the label definitely helped the band because they had a much bigger reach. Coming into the modern way of doing things, yes, a label is helpful, but if you have the means and the connections to do it yourself, you can also pull that off. So I was a little bit frustrated giving that record to a label who I felt didn’t pull their weight or do anything outside of what I could have done on my own. We had a few leftover songs from that recording so I thought “I’m going to put this out.” The label name WAR is an acronym for Witness a Rebirth, which was basically the impetus of starting the label. So yes, it was something I always wanted to do.

I’ve been involved in the hardcore scene and music for many, many years. I have the connections, and the know how — I’m just going to do this. So that was kind of the impetus and from there, it just kind of grew. The second release was a Piece by Piece flexi, which was Nick from Terror who had recorded the Strife album. It just grew from there with different bands.

I try to go the extra mile to really spread awareness for the bands I’m working for and just make the release the best possible. I want every band that decides to put out a record with me to be super happy and have no regrets about working with my label.

Being a label owner presents a whole different set of challenges than being in a band. What were some of those?

I think being a label owner, you’re dealing with many personalities so it’s important to hold the reins and take charge. “We’re going to move forward and we’re going to move quick and this is what we’re doing.” Or sometimes it’s like, “Hey, let’s slow it down. You’re moving too fast. Let’s kind of build this in a different way.” Making sure there is a clear path of communication and everyone’s on the same page is super important. Hopefully a band has trust in me, in what I’m going to do, which will be in the best interest of the band.

I think the biggest issue is that the turnaround time for a record is very slow and there’s a lot of uncertainty. I usually don’t set release dates until I have an exact delivery date from the pressing plant, so sometimes I’m sitting on records for a month until the release date because we need the time to market it. We need the time to get our distributor and stores, so we’re not dealing with delays.

Thankfully with every release I’ve put out — I think I’m up to 26 — nothing’s actually been delayed from the release date. So, there’s a lot of moving parts. I’m very thankful to have a great team as well. Linas Garsys has designed many of my releases like the newest Terror release, Reserving Dirtnaps and the layout for Enforced. I’ve done a few releases that Arthur Rizk mastered, and he’s a good friend of mine and a big name producer as well.

How do you come across to the bands that you sign? Is it basically word of mouth from friends of yours? Do you ever scour bandcamp on your own or anything like that?

I get hit up a lot by bands but I am very careful as to not overextend myself or commit to too much. So I can actually really work a record. I like to have space between each release so I can focus on one band, build some hype. I’m not trying to put out 15 records a year — it’s just too much work. Aside from some of my designers and my distributor, I’m a one man team. I ship my records from home. So I like to just be able to focus and really work on each band.

Any news with Strife? Berthold City?

Earlier in the year before the lockdown, Strife started recording some new material which obviously got put on hold. We’re hoping to get back in the studio at some point in the next few months and finish it up. All the music has been recorded and we’re basically just waiting on Rick to come in the studio and lay down his vocals. He’s got a young kid at home and his wife’s pregnant, so he’s a bit more cautious about being in studio and around other people. I totally respect that, and the good thing is right now there’s no deadline, right? That being said, hopefully we have a new record out by the end of next year.

Berthold City are currently in the studio putting the finishing touches on our debut LP. We recorded 14 songs worth of music, and now I’m just going back in and working on the vocals. So we’re looking to probably do 12 of those and get an LP together. I would say the way pressing plants are right now, I’d say early summer of 2021 that’ll be out. And then quite a few bands on the label are working on LPs.

How did your latest release with Terror come about?

I’m super close with everyone in the band but to be able to work with them on this label, my label.  It shines such a positive light on the label to be working with a band of that stature and I am definitely thankful and honored. It’s a great record. I spent all weekend shipping the orders. It’s been a lot of work but I think everybody’s really happy how it turned out.

I’m going to go member by member in World Be Free and I’d like for you to point out your favorite release by each. Let’s start with Sam Siegler.

I would say probably Judge’s Bringing it Down. Not only was that an amazing sounding record and a hugely influential record on me, I think that was also where Sammy’s drumming was so next level and where he came into his own as a drummer. His drumming is cool on Side by Side — he’s a 14 year old kid and he’s amazing for his age for sure. He’s just an amazing drummer and I’m definitely super excited to be in a band with him. He’s very creative and looks at music very differently than other people and tries to play things that just aren’t super obvious.

What do you think is your favorite record by Scott Vogel?

I’ve been listening to Scott’s records since Slugfest, right? Strife toured with Despair, played shows with Buried Alive, but I think Scott really came into his own and found his voice with Terror. I would say it’s probably a toss up between Lowest of the Low and Keepers of the Faith. Both of those are amazing records, but I love everything Terror’s done.

What about Alex Barreto?

Alex is such an amazing musician. He’s a top tier drummer, top tier bass player and top tier guitar player. He played drums in Inside Out and Hard Stance. Hard Stance did a benefit show reunion around four years ago. I played guitar in that and Alex played drums. He played bass in Chain and was in Alien Ant Farm and filled in for a few other bands. But he’s an amazing, fantastic bass player, and he plays guitar in Excel, and he’s an amazing guitar player.

I was gonna say that if he had played on the Inside Out seven inch, I would say that would be my favorite release by him, but it’s kind of a toss up between the two Chain of Strength records. Both those records are perfect hardcore records, and different. You know the first one is perfect, straightforward, hardcore and the second one is a little more emotional. But both are just great, great records.

Joe played in Despair. He played in Envy from Buffalo. Strife played a lot with Envy when he was in the band. It was him and Larry ransom who later worked at Revelation for a number of years. I’ll give it to Envy only because they are super underrated and they played a lot on the East Coast and in the 90s. And I definitely think it’s a band that people should go back and revisit. It’s straightforward hardcore but it’s cool and it deserves to have a light shine on it.